It's been a week of ructions and divisions, belated resignations, bizarre promotions, perplexing awards and humiliating backdowns — all of them on the conservative / reactionary side of politics.

Seems to me, the gloss is rapidly starting to fall off the Prince of Point Piper.

The Government has been mired all week in the Stuart Robert scandal, which really just boils down to Robert being sneaky and dishonest, and getting caught out.

What amazes me is that Turnbull didn't ditch Robert as soon as the substantive facts became known, rather than endure a week of headlines and torturous Question Time sessions, with Robert cringingly "pleading the Fifth". A dismal display.

It was the same pattern the Libs endured with Bronwyn Bishop, Mal Brough and Jamie Briggs. All hanging on when their inevitable demise was patently obvious to all. Of course, if Stuart Robert even possessed an ounce of common sense and decency, he would have immediately owned up and resigned — something he eventually did on Friday (12/2/16).

It was a terrible look all round.

Especially after his Canberra housemate, Treasurer Scott Morrison, had called it a "ridiculous beat up" and the new Nationals Leader Barnaby Joyce said

What is wrong with these people?

Of course, new Deputy Prime Minister Barnaby Joyce couldn't see anything wrong with being flown to India by his sponsor Gina Rinehart to attend a great big Indian coal wedding, so...

Now, I may come from Dingo, but even I can see language mangling Barnaby Joyce is a hayseed. And this is the man who will be acting prime minister when Malcolm Turnbull is overseas, or on leave. And will become prime minister if, for example, Turnbull goes to Coogee Beach one day and tries to walk on water — which seems, quite frankly, an altogether likely turn of events. 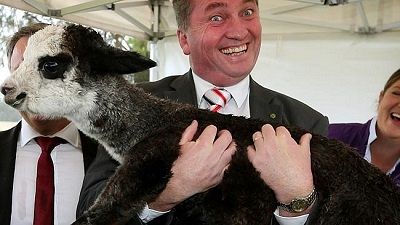 The country is in safe hands (Image: weeklytimesnow.com.au)

Let me just say that this latest turn of events doesn't exactly fill me with confidence for the future of our glorious nation. And given climate change denying Barnaby has boasted about being a big part in helping to roll Turnbull to install Abbott as Coalition leader in 2009, I can sense trouble ahead for sweet smelling Malcolm Talcum from his straw chewing jackaroo.

Speaking of climate denial, this week we also heard about the new CSIRO chief sacking 450 climate scientists and effectively closing down Australia's climate research capabilities. I thought Malcolm was serious about climate change, unlike his predecessor? Perhaps not.

Which leads us neatly to Minister for Coal Greg Hunt being awarded the "World's Best Minister" Award by Thomson's Reuters. That's right. Really! A bit of sleuthing by IA's Lachlan Barker, however, revealed this award was largely sponsored by the fossil fuel industry, which kind of makes everything snap sharply into focus.

This award came as Father of the House Philip Ruddock was rewarded for his long service to the Liberal Party, including his key role in the "Children Overboard" debacle, to take up a special envoy position for the Government promoting – wait for it – human rights.

Yep. Truly. I assume this job was conceived by the same Liberal Party adviser / satirical genius who advised Tony Abbott to make himself minister for women.

We also shouldn't forget the other retirement announcements this week, including largely anonymous veteran Nationals Leader Warren Truss and Trade Minister Andrew Robb. Robb, of course, was the zealous architect of Australia's latest cargo cult — "free" trade deals, the latest being the appalling TPP. Robb has, conveniently, resigned before the deal has been ratified by all nations and before the terms of the deal become fully disclosed to the public. So, while he may be tarred and feathered later, he gets to go out on a high and look for opportunities in the "private sector". I'm sure he'll have a multinational paying him his 20 pieces of silver in relatively short order.

Of course, the most important news of all this week was that, after months of scaring the Australian public about a 15 per cent GST, brave, brave Sir Malcolm bravely turned tail and ran away from the proposal.

This, despite Treasurer Morrison's recent bluster about Malcolm and him winning over the recalcitrant Australian public just like Morrison did with "boat turn backs". Really?

What a humilating backdown. What a week of chaos. What an utter shambles this weak, ineffectual Turnbull Government is turning out to be. So wrought with division and led so poorly by a gladhanding spiv most members of his own party utterly despise, it is barely functioning at all. Certainly, it is not achieving anything.

Although, according to the mainstream media, Turnbull is doing a great job and will be re-elected with ease. And maybe he will. But the opinion polls do appear to be narrowing and, with the way he's accruing scandals and losing ministers, well... we'll see.