Open letter to Stuart Robert, from his employer — the taxpayer

One of Human Services Minister Stuart Robert's actual employers, a taxpayer – not his mining boss mate who pays the Liberal Party's bills – offers him some home truths.

I am one of the taxpayers who pays your wages and entitlements. You work for me.

An article in The Australian this morning reports that although you claim that a trip to China last August was for private purposes to help your rich mate Marks who bribed the Liberal Party with "donations" of $2.5 million in recent years, you nonetheless charged taxpayers over $900 to fly to Sydney the day before to catch the international flight. 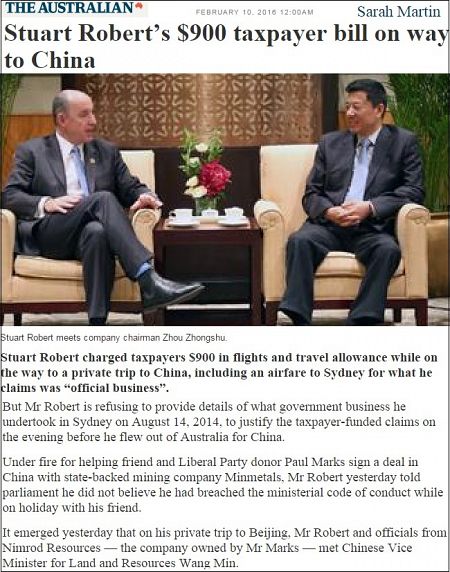 Or were you merely obeying the advice of Tony Abbott, who, as prime minister, advised ministers to cynically and conveniently schedule business visits to cities just so they could "justify" billing taxpayers to be in that place for private purposes.

Indeed, as I'm sure you'd remember, Abbott made a token, very brief, pop in to say "g'day, how are ya?' visit to a cancer ward of a Melbourne hospital just so he could justify charging taxpayers the cost of attending a private function in Melbourne. Then, later, he chartered an RAAF jet to attend the birthday party of fabulously wealthy Liberal Party briber/donor by the name of Paul Marks.

And, yes, this is the same Paul Marks who summoned you to China last August just so he could look important having an Australian government minister at his side, at his beck and call, to be the sycophantic poodle you most surely looked to be imitating in front of your embarrassed Communist hosts.

Can we compare your trip to Sydney last August to the late Don Randall's visit to Cairns with his wife a couple of years ago? Close your eyes, Stuart, and put your hand over your ears, but we can't forget the fact that Randall, who wasn't the saint that your mob painted him to be, attended Cairns to inspect and buy a house for himself. But when the media cottoned on to the fact that he charged taxpayers the cost of flights and other expenses to get there, Randall came up with some cock and bull make-believe once-upon-a-time stories that he had an important meeting in Cairns with some big, fat, bloated, overly-indulged government minister who goes by the name of Entsch.

As if! Haven't you freeloaders, who claim to be so enchanted with modern technology and innovation, ever heard of Skype, or telephones, or emails?

Anyway, I digress. I consider that you are ripping taxpayers off. That you lie to us at the drop of a hat to put your hand in our pocket to rob us. To indulge yourselves at every opportunity.

My advice to you? Piss off. Go get a real job. Stop stealing money from me, your employer.

And remember this: Paul Bloody Marks isn't your boss — WE TAXPAYERS ARE! 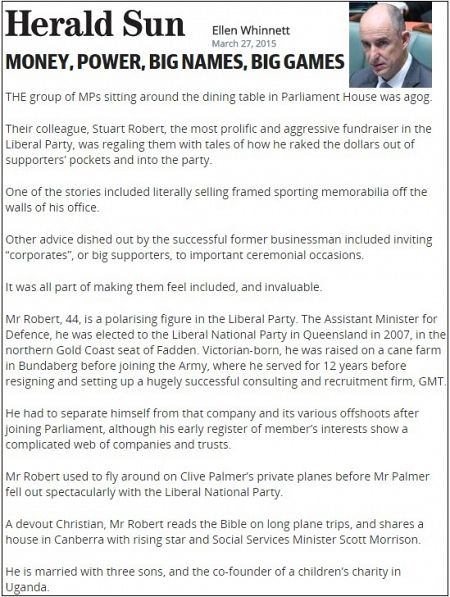 Open letter to Stuart Robert, from his employer — the taxpayer

28 October 2015, 3:30pm In an email to the Washington Speakers Bureau, P. Miles enquires about engaging one ...
Join the conversation
comments powered by Disqus
News updates