Earth is running a fever but PM Turnbull thinks the CSIRO has more important things to do than investigate climate changes, says Peter Boyer.

It isn’t easy to get the head around how science worked out that Earth’s surface in 2015 was exceptionally warm. Here’s my explanation.

In past years, I’ve tried to report findings as soon as possible, usually around mid-January, when the U.S. National Atmospheric and Oceanic Administration’s Climate Data Center and NASA’s Goddard Institute of Space Studies release their analyses of records dating back to 1880. 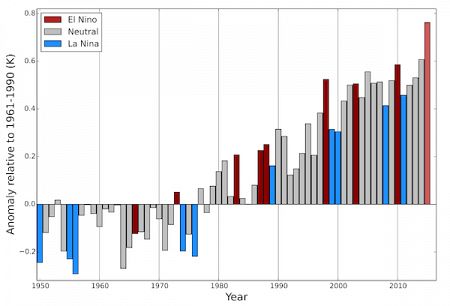 The World Meteorological Organization’s assessment of global mean surface temperature, showing 2015 in orange. (K = degrees Kelvin, which in this context is the same as Celsius.)

Some readers thought I was favouring these findings over the UK source, the combined dataset of the Met Office Hadley Centre and the Climate Research Unit of the University of East Anglia, whose analysis starts in 1850. So this year I waited until all were in.

Besides that “big three”, Australia’s Bureau of Meteorology compiles its own global time-series based on the UK dataset. The Japan Meteorological Agency has its own dataset starting in 1891, and Berkeley Earth, a privately-funded U.S. group, analyses data all the way back to 1750.

All these analyses draw on millions of observations. Some come from about 1500 strategically-located land stations, but bearing in mind that over two-thirds of Earth’s surface is ocean, most are from ships at sea and ocean buoys, increasing in number every year.

Some people have questioned the small number of land stations used (about one for every 100,000 square kilometres) and pointed to location (valley or mountaintop, grass or asphalt surface) affecting absolute readings. Both questions are largely resolved by the anomaly technique.

Absolute temperatures in various locations are less important in studying global climate than change over time. To discern this scientists look at anomalies: how much the temperature in each given place diverges from the long-term average for that location.

To establish a global mean, each agency uses its own methodology. That makes for sometimes pronounced differences in ways of processing the data and handling inevitable gaps over space and time. This independence is a good insurance against shared errors and biases.

The possibility of duplicated errors was tested by the Berkeley group, set up in 2010. Its co-founder, Richard Muller, had believed global temperature analyses used corrupt data and faulty techniques.

To the contrary, Berkeley Earth found that established datasets were robust, and that if the various agencies had erred about global warming, it had been on the conservative side.

In late January, the World Meteorological Organisation released its 2015 temperature report. WMO draws threads together from many sources, including the major U.S and UK datasets. It also goes to the European Centre for Medium-Range Weather Forecasts, which uses weather forecasting systems to fill in observational gaps such as for polar regions.

There’s never been a less exciting time to be an Australian scientist with 350 job cuts.

All sources in all countries reveal a steadily warming world, with every year since 2000 among the 20 hottest years. The only 20th century year in the top 10 is 1998, which held the record for seven years thanks to the powerful 1997-98 Niño.
And all the different sources, without exception, showed last year to be warmest of all, by the widest margin on record. WMO put it at 0.16C above 2014, 0.27C above 1998 and over 1C above the mean when warming began in the 19th century.
Australia’s mean in 2015 – 0.83C above the 115-year average – made this our fifth-warmest year on record. The strong El Niño got our fire season off to an early start, with Tasmania experiencing catastrophic fire weather in October.

Looking ahead, meteorologists are anticipating a warm 2016, maybe even warmer than 2015 depending on how long this El Niño continues. Longer term, the UK’s Met Office expects that if we get any relief from warming it will be short-lived.

Yet incredibly, CSIRO head Larry Marshall told the ABC’s 7.30 last week that CSIRO had more important things to do than investigate how climate changes. There’s nothing more important, and that statement will haunt his career from now on. But that’s a whole new discussion, for next time.

This article was originally published on 9 February 2016 in SouthWind and is reproduced with Peter Boyer's permission.

CSIRO ship built to study marine science has been hired out to Chevron&BP to help them search for oil & gas#auspolhttps://t.co/6WaszbkczO

Australia,though,would rather dismember Gonski and the NDIS and gut the CSIRO than take on the big multinationals https://t.co/K3URCluqoj

​Want to get the facts on climate change? Subscribe to IA for just $5.