In the final, frenzied days of political campaigning all over Australia, Lee Duffield protests the "phony war" of insults used to attack Anthony Albanese and economic management.

ONE OF THE themes of the 2022 Federal Election campaign, Scott Morrison’s talk about “economic" and “financial” credentials for being in office, is a sign of the “neoliberal” times.

Clearly, Prime Minister Morrison is saying that a party leader should not be allowed to make prime minister unless he was treasurer first — because he himself was a former treasurer.

He made it up, claiming Opposition Leader Anthony Albanese, as a minister in Labor governments, had not served in an “economic” portfolio.

Albanese, maybe a hundred times, then got it across that he had after all been deputy prime minister, minister for transport, infrastructure and regional development — “economic” roles as few would deny. Morrison, never short on gall, then just switched the rhetoric a bit to say “financial portfolio” instead of “economic portfolio”.

That did say something about the “financialisation” of life under the secular cult of “neoliberalism”, now unravelling on a global scale, but still held on to as orthodox by the likes of Scott Morrison.

His thesis: government as with everything else should be run by people who know how to "manage money”.

Leave aside credible arguments being made by Labor and many others that the man himself could not run a bath — on the evidence of three and a half years of him gaffing and floundering around in the top job. 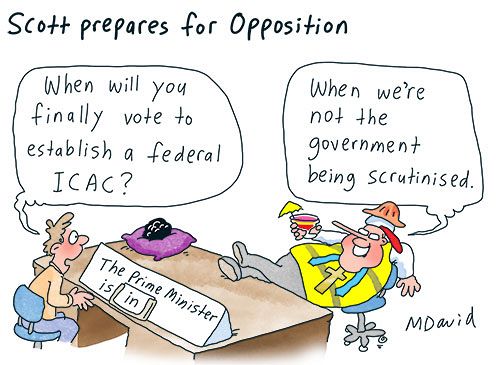 His message, privileging involvement in “finance”, is a weird and feeble effort – you could say actually disloyal to certain fellow conservatives – to ignore the full history of what leadership in government is about.

There is the example of not financial acumen, but brilliant military leadership transferring to a deft application of power in government, as with Alexander the Great, Bonaparte or Washington. There is the practice of just and wise state-craft, as with Pericles.

Consider a few examples strictly from Morrison’s own side, where conservative practitioners might have gambled most successfully on Wall Street, but actually had other kinds of strengths, though no background in “financial portfolios”.

The conservative duo, Reagan and Thatcher, meddled in economics and finance on a grand scale, with many tragic effects, but based their leadership and power on personality —  on rhetoric, style and blind determination.

Menzies, who dined well and liked a good cigar, would not be one for frenetic, greedy moments on the floor of the Australian Securities Exchange (ASX); he did it as a tactician, riding the wave of post-war prosperity, pinching Opposition policies here and there to keep in front.

Churchill, a warlike man, had a compromising background in several “economic” portfolios including as chancellor of the Exchequer (treasurer), where he made dreadful blunders; but heading the government, in the crisis, his strength was character and courage.

So, the word “character” gets into the discourse.

Snivelling points-scoring and “campaign themes” like this harping on “economic”, then “financial” portfolios, do cause a distraction for people wanting to decide who means business and who is serious about running the country.

Anthony Albanese in response to the taunt about “financial” portfolios, has pointed out that Labor leaders did not have that kind of background on the three occasions the party won government from office since World War II.

He could have brought up the same for the Liberal leaders on the four occasions they got in from Opposition. There was not that much Wall Street about them either.

On the number of times elected out of the cold – four against three – a Labor victory on 21 May would make it quits. 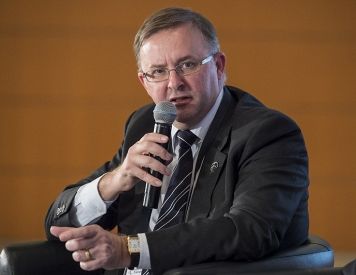 On the idea of “financial” qualifications, spurious or otherwise, the public record will show up whether it makes that much sense:

Menzies was deputy premier of Victoria for two years before becoming federal attorney-general and minister for industry 1935-39, when he became PM, then lost office in 1941 and returned from Opposition eight years later. Maybe the deputy premiership and the national industry portfolio qualify him as being much the same as Albanese, in terms of “economic” portfolios, but not “financial” ones either.

Whitlam was a barrister before entering federal parliament and, along with his full ministry, had held no portfolios in government.

Fraser was defence minister and had never held an “economic” or “financial” portfolio when elected PM in 1975. Frighteningly, it did not stop him dabbling in economics, where his limited intelligence came to the fore. In Opposition, he became the nation’s loudest backer of the ultimately destructive financial philosophy, the radical "neoliberalism" promoted by the world financial and corporate community after 1970.

Hawke, the former head of the national union body Australian Council of Trade Unions (ACTU), had not been in government so never held a portfolio before becoming PM. He’d been in parliament for only three years, but made up for it by winning three elections.

Howard had been federal treasurer in the previous Fraser Government, (which is rated as both “economic” and “financial” by Morrison — considering that he used to be the treasurer too.)

Rudd was a China specialist and former diplomat when appointed to the powerful position of head of the Cabinet office in Queensland’s Goss Government. For “economic” or “financial” credentials, his role as an overseer of that government’s “Leading State” economic program might have qualified him as getting close to where Albanese is today.

Abbott had been the minister for workplace relations and small business, then for health and ageing. The workplace relations job as an “economic” portfolio might have edged him towards being as qualified as Albanese is now, but the Liberals would have to denounce him for not having had a “financial” one.

The idea about being in government before and being in “economic” and “financial” portfolios before getting to be PM, has provided one side with something to go on about. But as said, all the talk tends to come down to “phony war”, not actually what the game of government is about.

In its last days, the very long campaign did get down to some actual differences between what the candidates are and what they might do: Morrison has proposed to ease up on being "a bulldozer” and change his style; Albanese replied he was himself "a builder", not a dozer, and if returned, the government would stay arrogant and out of touch. For his part, he wanted lower-income earners’ pay to keep up with headline inflation; Morrison said giving them that would destabilise the whole economy.

These fights have to be endured; maybe after all not a bad price to pay for democratic government.