A huge number of Australians will be plunged into poverty overnight as others get to renovate their homes — courtesy of the Morrison Government. Tarric Brooker reports.

AS THE coronavirus economic crisis continues to unfold, millions of Australians face the prospect of joining the 1.6 million people already on Centrelink benefits when JobKeeper concludes in September.

To add insult to injury, the Morrison Government’s JobSeeker $550 per fortnight supplemental payment also concludes at the end of September. This will potentially leave millions of people far under the poverty line in an instant, during the worst economic crisis to hit our nation since the Great Depression.

Whether the Government is choosing this course of action due to a genuine belief that the economy will “snap back” to normal – despite warnings from the Reserve Bank and economists that it won’t – or simply due to the ideological priorities of the Coalition’s leadership, it doesn’t really matter, the end result is the same.

A huge number of Australians will be plunged into poverty overnight.

All in this together? Would you take a pay cut? #auspol #npc #ScottyFromMarketing pic.twitter.com/hEhg8ieqYk

Meanwhile, the Morrison Government has confirmed it will be offering cash grants to homeowners to renovate their homes, in order to boost the construction sector.

However, builders seem to feel quite differently. In an interview on Monday with 3AW, president of the Builders Collective of Australia Phil Dwyer said he “can’t imagine why” the Government would introduce such a scheme.

Mr Dwyer told 3AW, the building sector is as busy as ever:

"At the moment I think it’s a little bit busier than usual! There’s a heap of renovations in every suburb in this town. I can’t imagine why we would need cash injections to help us. We’re just going to overheat the industry. I don’t think it’s needed.”

Mr Dwyer’s view is supported by the data from the Australian Bureau of Statistics, which shows that spending on residential renovation work was within nine per cent of all-time record highs during the December quarter of 2019 (the latest available data). 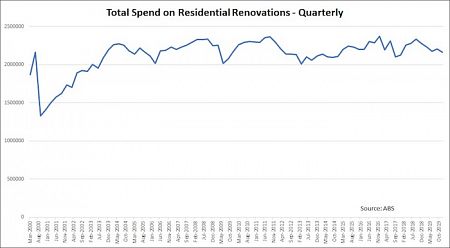 It’s like our nation has transited to some sort of weird parallel universe, where helping over a million unemployed Australians get back on their feet is unfunded empathy, but handing out large amounts of money for homeowners to renovate their properties is “superior economic management”.

Prime Minister Scott Morrison likes to say that “the best form of welfare is a job" but the number of jobs on offer has collapsed and economists are warning of the economy and labour market heading “off a cliff” when JobKeeper and mortgage holidays conclude. Yet the Government continues to be hell-bent on pursuing its ideological agenda.

The world has changed; the Coalition hasn’t

The reality is, the world has changed and even nations such as South Korea – which were hit with the pandemic early and dealt with it extremely well – are now struggling. Economic forecasts around the globe continue to be downgraded and unemployment predictions revised upwards.

Even with the global economy in recession and despite the United States literally burning under the strain of current events, the Coalition continues to insist that somehow the economy will quickly "snap back" once COVID-19 restrictions are lifted.

As our nation heads into this dark and uncertain future, it's concerning to think that the Morrison Government may continue to pursue its ideological agenda, regardless of the reality being experienced by everyday Australians.

So far, the proposals put forward by the Coalition Government to kickstart the economy have been variations on the its ideological greatest hits. Including some of their top favourites, such as industrial relations reform, cutting corporate taxes and subsidies for the fossil fuel industry.

Ultimately, it’s a worrying time to be an Australian, as a Government devoid of a grand vision of the future attempts to navigate the largest economic storm in almost a century, while simultaneously continuing to attempt to pursue its narrow ideological agenda.

How this all ends is anyone’s guess, but it seems likely that there will be homeowners who are going to get a subsidised kitchen renovation, courtesy of the Morrison Government, while needy Australians go without even the basics.

- Millions of Aussies are locked out of home ownership

- 1.66m are on Centrelink unemployment benefits & will have their income cut in half on October 1st

- But we've got money for homeowners, no doubt including the wealthy to do govt subsidized home renovations#FundedEmpathy https://t.co/X45TIbBQCO