Mal Brough claims he was completely exonerated by the Federal Court in a case in which he was not even a party. Ashbygate investigator Ross Jones reviews the evidence.

You probably shouldn’t slag off at Federal Court judges, but jeez...

Mal is referring to Ashby’s application for leave to appeal, heard by their Honours Justice Mansfield, Justice Siopis and Justice Gilmour on 1 May 2013.

The decision took 10 months — the same time as bovine gestation. God knows what they were doing. Thinking, maybe, though who knows what about? How evidence can eventually disappear if you wait long enough maybe. Finally, on 27 February 2014, their Honours made public their decision.

It had been a split decision, with Siopis denying the appeal in a tight and cogently argued 32 page reasoning.

Mansfield and Gilmour, on the other hand, accepted Ashby’s argument that the primary judge, Justice Rares, had erred in law. Their main beef was that Ashby’s allegations had not been tested in cross-examination and that Rares had accepted "uncontested" evidence.

We are satisfied that the evidence before the primary judge did not warrant the adverse finding said to constitute an abuse of the court's process on the two bases found and did not warrant the rejection by his honour of the sworn and unchallenged evidence of each of Ashby and Harmer.

We have concluded that Ashby's unchallenged claim that he felt harassed and distressed by the alleged conduct of Slipper was not inherently improbable or incredible.

Let’s look at what Mansfield and Gilmore actually said about Brough.

On the way to their conclusion Their Honours said some odd things — and one of the oddest can be found at paragraph 120 of the decision.

… The primary judge's finding that Ashby had contacted Brough prior to 28 March 2012 to 'indicate his preparedness to undermine Slipper'. There was no evidence to support such a finding. The only evidence before the primary judge, but not referred to in the reasons, was to the contrary: that of Ashby and the press interviews given by Bradford and Brough and Mrs Brough … Bradford stated that Ashby had told her he did not wish to speak to any member of Parliament. However, she persuaded him to contact Brough because she believed he was the only person who could assist Ashby.

Perhaps Rares did not refer to it in his reasons was because it was drawn from an article in a News Ltd publication. This disinformation story was set up by Brough in an attempt to cover his tracks after Fairfax journo Jessica Wright exposed the fact he’d met with Ashby. We have a statement to prove it.

Things get weirder in paragraph 122.

… There is no evidence that Brough offered to assist either Ashby or Doane to find new careers.

That’s enough to make you gag on your Weetbix. 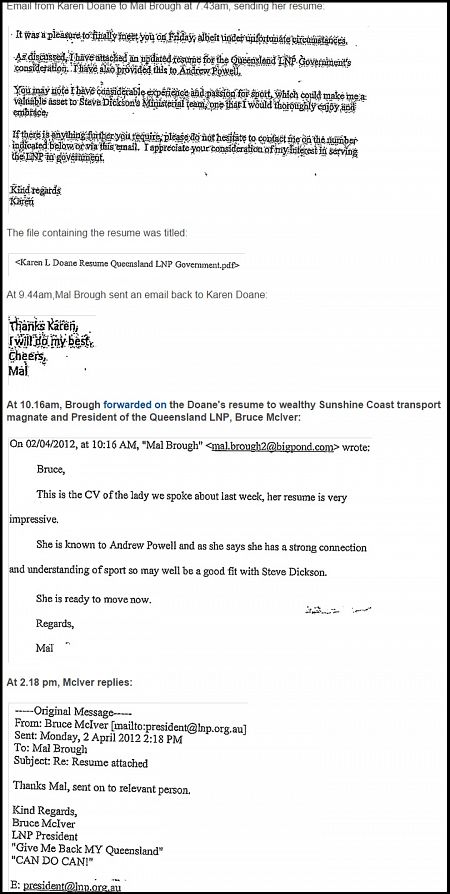 Then there is the bit Brough likes to quote at Dreyfus, paragraph 124, where Mansfield and Gilmore state:

We are also of the opinion that there was no basis for the primary judge to conclude that Brough was part of any combination with anyone in respect to the commencement of these proceedings with the predominant purpose of damaging Slipper in the way alleged or at all. Ashby was persuaded to contact Brough by Bradford.

This is so wrong, I don’t know where to start. So I won’t. Read the book.

IA's new book ASHBYGATE, by Sydney bureau chief Ross Jones, will be officially launched at 10.30 am, 10 December 2015 at the Shearwater Resort, 79 Edmund Street, Caloundra. All are welcome!

You can purchase your copy of Ashbygate as an eBook or paperback by clicking HERE or on the image above.

Why was Brough preselected? How'd he raise $1.5m for his campaign? Why did Turnbull promote him? Why's he still there? Who's backing Brough?

27 January 2022, 4:00pm Australia's corruption score has reached a new low, highlighting the urgency for a ...