In a recent interview, Mal Brough described his total involvement with James Ashby as five "frivolous" texts; Vince O’Grady's demolishes this arrant fiction through a detailed timeline of Brough's extensive involvement with, not only Ashby, but many other Ashbygate co-conspirators.

HAVING RESEARCHED the number of times Brough fronted the press and what he actually said to them, now was the time to trawl through the evidence from the Federal Court documents for about the third time.

This was necessary because after the original application, there were various court dates with various requirements, such as subpoenas and also affidavits from the applicant and the two respondents.

After each court appearance, new documents were put up on the court website and new revelations came to light. What seemed irrelevant or uninteresting suddenly became relevant and very interesting.

The subpoenas that Doane, Brough and McClellan had to return to the court and which Brough tried to make out were just helping the court, were in fact a requirement under law to produce the communications between each other.

They added new information which was never in evidence before. This information was in several documents and it took about two days of solid reading to assemble the timeline of events.

Please remember that this must be read in relation to what Brough said in his press interviews and then you can form a view as to whether he has told the whole truth as he asserts or headed off up a ‘dry gully’ of his own making. 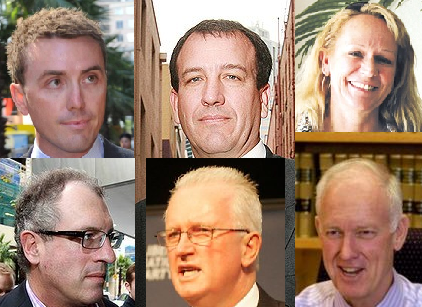 Part Two: Time line and actual evidence of Brough’s communications with Ashby and other conspirators

Ashby rings Brough to meet with him for an undisclosed discussion.

Ashby discusses Slipper's campaign against Brough, cabcharge rorts and it is not clear whether he also discussed the sexual harassment allegations in this meeting.

Texts between Ashby and Doane.

(Note Texts before and after this block missing.) 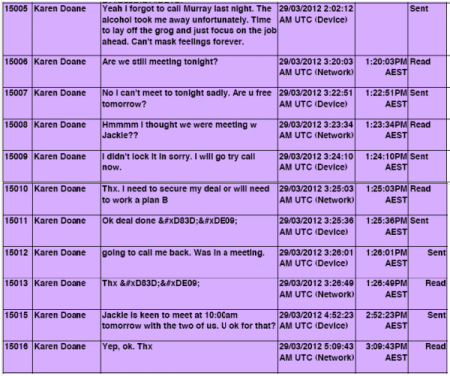 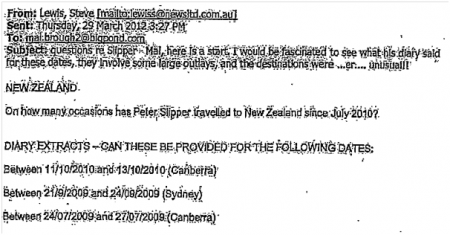 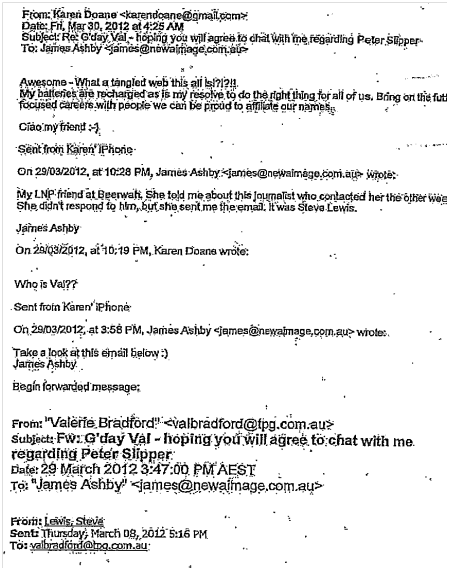 This message is pertinent because it refers to Val Bradford, the woman named in the Brough interviews as having referred Ashby to Brough.

1.2. Brough meets Ashby, Doane. Ashby for the Second time and Doane for the first.

It appears that “Jackie” may be there as well. (See texts on 29 March) and this text to Ashby from Doane:

So Jackie must have been at the meeting with Brough, Ashby and Doane.

So, Jackie was around. Also, this pair are in touch with Murray:

Ergo, Brough has an association with Murray (whom we think is Deputy Opposition Leader Julie Bishop's chief of staff Murray Hansen) and Jackie (whom we believe is former Jackie Kelly)

Further down in the text conversation, Jackie has arranged a lawyer for $1:

This barrister is David Russell QC, as we discover in October 2012.

Email from Karen Doane to Mal Brough at 7.43am, sending her resume: 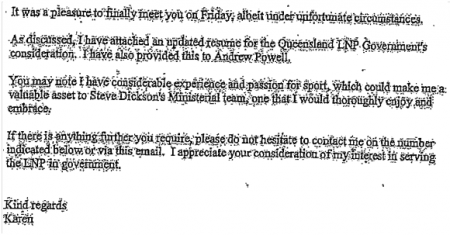 The file containing the resume was titled:

At 9.44am,Mal Brough sent an email back to Karen Doane:

At 10.16am, Brough forwarded on the Doane's resume to wealthy Sunshine Coast transport magnate and President of the Queensland LNP, Bruce McIver: 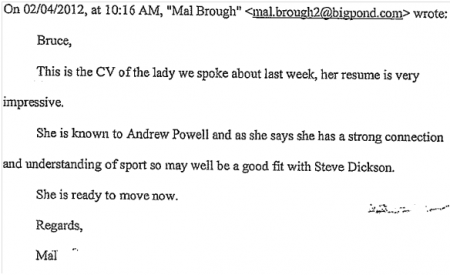 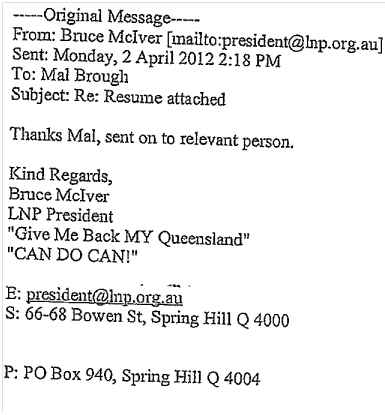 ...to arrange a meeting with Steve Lewis.

At 6.14am an email is sent fromKaren Doane to Brough: 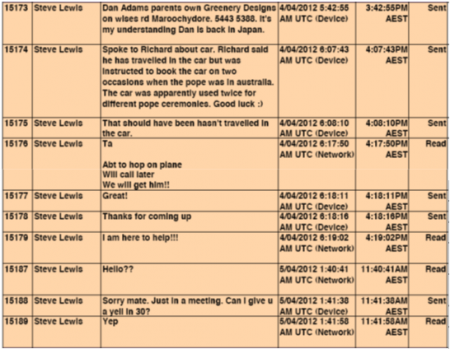 Brough, Ashby and Doane meet with David Russell QC at his home on the Sunshine Coast

This affidavit was entered into evidence and appeared on the Federal Court website on 9 October.

Karen contacts Ashby and then Lewis to ensure Lewis has every bit of potentially damaging information about Peter Slipper she can send him: 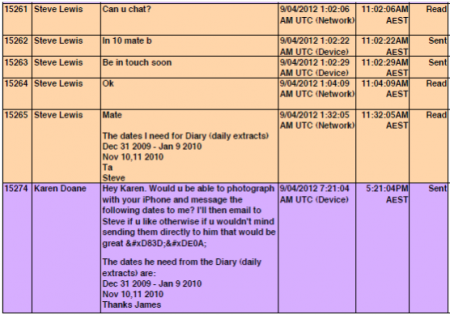 Email fromDoane to Brough asking for a job with Clive Palmer:

At 10.28am, minutes later, Karen Doane sends another email to Mal Brough:

The rest of the message contained details of Karne Doane’s sickness and inability to work. And Peter Slippers email to her and his staff.

After this email (page 104 of the evidence) the following undated communications between Doane and Brough are shown, indicating the depth of Brough's plotting with Steve Lewis and others. 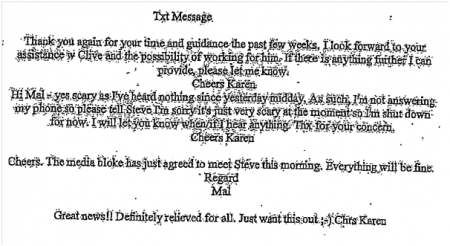 The first text message was sent after her emailed resume to Brough, so after 10 April 2012.

The next text message is around the period that Ashby shuts down communication from his phone and  is after 10 April and before 14 April 2012. It mentions Brough being in communication with Steve Lewis.

Brough texts Ashby asking him to call him.

Mal Brough emails James Ashby at 10.27am about some "potential problems".

Why would Brough have any "potential problems" if the extent of his involvement in the affair, as he's always claimed, was merely to "help" James Ashby?

Documents regarding the sexual harassment case and the cabcharge vouchers were sent by Ashby (Harmer’s Workplace Lawyers) to the Federal Court.

Two more emails from Mal Brough (at 2.00PM and 2.03PM) to James Ashby requesting that Ashby ring him (page 98 of the document).

Brough was sent a subpoena to produce documents filed on behalf of Peter Slipper by Maurice Blackburn Lawyers.