IA can happily report it's finally found a politician who reflects our values. Sadly, he's not Australian. Senator Bernie Sanders is the latest contender for the American Presidency. He's Jewish and fiercely independent which would make him the first such President on both counts. Deputy editor, Sandi Keane, asks what YOU think.

IMAGINE AUSTRALIA were already a Republic. Imagine we could vote for our own President. Imagine we could finally voice our opinion of our current crop of alternative party leaders and vote for an INDEPENDENT! An independent like U.S. Senator Bernie Sanders, that is (sigh).

Bernie has become a hero of the American people — a progressive politician who really “gets” democracy, wants to break up the big banks, dispense with college fees, get rid of fossil fuel subsidies, and bring on gay marriage. And that's just for starters.

Bernie’s aim is to shake up the injustice and bias in the U.S.’s political system so on Tuesday, he announced his bid for the 2014 Democratic presidential nomination.

Imagine (there’s that word again) — he’d be the first Jewish President of the USA not to mention first independent! (Well if Obama can do it…)

Ignored by the major networks, Bernie Sanders’ announcement that he’s running for President was broadcast by progressive commentator, Thom Hartmann, on his nightly program, who said:

Perhaps that's because Bernie is no kook but rather more mainstream than the 1 per cent the U.S. corporate networks focus on. Let's face it: they don't want someone who puts the people's interests above the interests of the corporate elites who provide their advertising income. As Juan Cole, one of the most highly respected political commentators in the U.S., put it, Bernie Sanders has trouble being taken seriously by the corporate media:

‘If you go to Google News and put in his name, you get headlines about him being nothing more than a protest candidate, or having “odd views,” or promoting “dark age economics.”

But the American people are giving serious attention to Bernie Sanders. Like Australians, they’re tired of playing second fiddle to corporate elites who have the power to buy political agendas.

Here’s an excerpt from Bernie Sander’s campaign launch speech. You can listen to the full speech here. I urge you to listen:

(please read about this corporate front group masquerading as a citizens’ group here).

Sanders has the majority of Americans with him on opposing the Supreme Court “Citizens United” ruling which has, in his words has

“corrupted the American political system and undermined the foundations of American democracy.”

"What the Supreme Court essentially said was that it was not good enough for the billionaire class to own much of our economy. They could now own the U.S. government as well. And that is precisely what they are trying to do."

Let's get Big Money out of politics because the U.S. is now an oligarchy:

Sanders wants to get Big Money out of politics. Political commentators agree that America has become an oligarchy with powerful elites like the Koch Brothers spending billions of dollars to get their candidates elected. They effectively control the levers of power in Washington. The Tea Party was the brain child of the Koch Brothers who founded it and bankrolled it. You can learn more about the Koch Brothers here.

"According to media reports the Koch brothers alone, one family, will spend more money in this election cycle than either the Democratic or Republican parties. This is not democracy. This is oligarchy. In Vermont and at our town meetings we know what American democracy is supposed to be about. It is one person, one vote – with every citizen having an equal say – and no voter suppression. And that’s the kind of American political system we have to fight for and will fight for in this campaign."

Again, Sanders shows he represents the mainstream on this. The majority of Americans want action on global warming. A recent poll shows 71 per cent agree it’s happening, 57 per cent agree human activity is causing it.

"The debate is over. The scientific community has spoken in a virtually unanimous voice. Climate change is real. It is caused by human activity and it is already causing devastating problems in the United States and around the world.

The scientists are telling us that if we do not boldly transform our energy system away from fossil fuels and into energy efficiency and sustainable energies, this planet could be five to ten degrees Fahrenheit warmer by the end of this century. This is catastrophic. It will mean more drought, more famine, more rising sea level, more floods, more ocean acidification, more extreme weather disturbances, more disease and more human suffering. We must not, we cannot, and we will not allow that to happen."

Addressing wealth and income inequality — the great moral issue of our time:

Sanders is again on the money with this. A recent Gallup poll shows 63 per cent of Americans agree that the wealth gap is unfair. 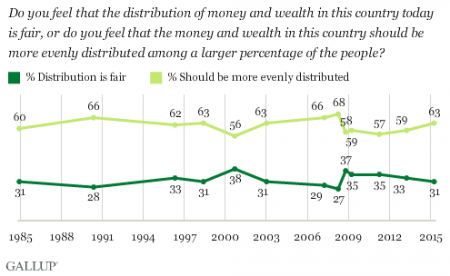 Let me be very clear. There is something profoundly wrong when the top one-tenth of 1 per cent owns almost as much wealth as the bottom 90 per cent, and when 99 per cent of all new income goes to the top 1 percent. … This type of rigged economy is not what America is supposed to be about. This has got to change and, as your president, together we will change it."

“You can’t have it all. You can’t get huge tax breaks while children in this country go hungry. You can’t continue sending our jobs to China while millions are looking for work. You can’t hide your profits in the Cayman Islands and other tax havens, while there are massive unmet needs on every corner of this nation. Your greed has got to end. You cannot take advantage of all the benefits of America, if you refuse to accept your responsibilities.

That is why we need a tax system which is fair and progressive, which makes wealthy individuals and profitable corporations begin to pay their fair share of taxes."

When Americans hear one of their politicians talking like this, they think they're dreaming. As one formerly disenchanted voter commented after watching the following speech by Bernie Sanders:

'WOW" "Watched it TWICE!" A real person, talking the truth, in the US Senate? It Must Be A Hologram or a Dream! Do Not Get Angry, Get Empowered With Information! He Will Be A Contender IN 2016!'

Health Care for all:

The onslaught of suasion in the last few years has been unrivalled in tricking or swaying people to put corporate interests before their own. Classic examples were Hands Off My Healthcare in the U.S. More on this here.

"The United States remains the only major country on earth that does not guarantee health care for all as a right. Despite the modest gains of the Affordable Care Act, 35 million Americans continue to lack health insurance and many more are under-insured. Yet, we continue paying far more per capita for health care than any other nation."

Sanders is worried about student debt and so is the majority of people under 30.  He’s come up with a range of practical measures to combat this problem:

"In a highly competitive global economy, we need the best educated workforce we can create. It is insane and counterproductive to the best interests of our country, that hundreds of thousands of bright young people cannot afford to go to college, and that millions of others leave school with a mountain of debt that burdens them for decades. That must end. That is why, as president, I will fight to make tuition in public colleges and universities free, as well as substantially lower interest rates on student loans."

Meanwhile, here in Australia, we have an unthinking, right-wing government who wants to introduce the American model, ensuring our university graduates will be in debt for most of their lives.

How to solve America's biggest problems with Bernie Sanders:

Take the time to listen to some of the most sensible solutions to America's problems you're ever likely to hear.

"We can live in a country:

Where every person has health care as a right, not a privilege;

Where every parent can have quality and affordable childcare and where all of our qualified young people, regardless of income, can go to college;

Where every senior can live in dignity and security, and not be forced to choose between their medicine or their food;

Where every veteran who defends this nation gets the quality health care and benefits they have earned and receives the respect they deserve;

Where every person, no matter their race, their religion, their disability or their sexual orientation realizes the full promise of equality that is our birthright as Americans.

That is the nation we can build together, and I ask you to join me in this campaign to build a future that works for all of us, and not just the few on top.

Thank you, and on this beautiful day on the shore of Lake Champlain, I welcome you aboard."

So what are his chances?

The American public feel their politicians no longer represent their interests but are held captive by powerful factions, unions, lobbyists and vested interests. They know they're disenfranchised from the decision-making process, resulting in less than 55 per cent voter turnout in presidential elections. But that could all change with someone in the White House who would finally represent their interests. As Sanders says:

“what we need to do create a momentum so 70-90% go out and vote and when that happens, we win hands down”.

IA thanks you, Bernie, for an insight into what a real politician with real values should look and sound like. If there is a God of Elections, you truly deserve to win "hands-down". Would-be PMs in Australia, please take note.

Here's Bernie's full campaign launch speech. Take the time to listen to it.

You can read more stories not covered by mainstream media. Subscribe to IA for just $5.