How well do you know the Greens new leader, Senator Di Natale?

IA was one of the first to spot and report on an aspect of Richard Di Natale overlooked by mainstream media — his playfulness. Deputy editor Sandi Keane hopes our poor psyches will get a regular dose of the Doc's special medicine in his role as the Greens new leader.

REPORTING ON the relentless negativity of Tony Abbott both in opposition and in government can sap the psyche of the most committed journo. So when a relatively unknown politician breaks through the rancour of the daily debate with a comedic take on a controversial policy (in this case, Labor’s carbon tax), Independent Australia couldn’t resist sharing the moment with you.

The playful prankster in question was our new Greens Leader, Senator Richard Di Natale who, back on 21 June 2012, posed the question whether the carbon tax was responsible for the recent earth quake in Victoria:

“My question is for the Minister representing the Minister for Climate Change and Energy Efficiency, Senator Wong. Senator, with the Labor-Green alliance's carbon tax now responsible for the death of Fairfax, can the government produce modelling to prove that the carbon tax did not cause or contribute to Victoria's earthquake on Tuesday evening? Furthermore, what do you have to say to those people who suffered distress and damage in the Victorian earthquake, and will you guarantee there will be no further earthquakes in Victoria ?”

Senator Wong joined in the fun confirming that other major disasters such as the loss of the Ashes were similarly not caused by the carbon tax.

As an Italian, food naturally figures large in Richard’s life.

"Mr President, I ask a supplementary question. I refer the minister to a recent episode of MasterChef, on 25 May, where Julia, a legal secretary from Queensland, made a pannacotta which failed to set. Is the minister aware that every significant stage of the pannacotta production chain, from milk to sugar, will be impacted by the carbon tax, and will the government ensure the carbon tax does not cause such culinary tragedies in the future?"

Dave Donovan's (IA’s managing editor) spirits were so boosted by the funster, Di Natale, he promptly published the entire debate on IA.

Bingo! We can now rejoice in a leader of a political party with a sense of humour. How civilized! That much we do know about the new Greens leader, so let's explore further.

Senator Richard Di Natale was the son of Italian immigrants whose mother and grandparents left their small village of San Marco in southern Italy with the hope of a better life in Australia. Richard’s Sicilian father worked as an electrician and his grandfather ran a grocery shop in Brunswick.

Senator Di Natale was the first Victorian Greens Senator, elected in 2010. Prior to entering politics, he was a general practitioner and public health specialist.

In his maiden speech to the Senate, Richard paid tribute to his family and Australia:

“My family has contributed teachers, doctors, factory workers, builders and lawyers and now, a senator. I owe them a great debt. I owe this country a great debt.”

The way Richard wanted to repay the debt was to help bring a positive change to people’s lives.

Prior to entering parliament, Richard worked in Aboriginal health in the Northern Territory and on HIV prevention in India as well as the drug and alcohol sector. In his maiden speech, he talked about his friendship with a young Aboriginal boy suffering from kidney failure. To keep him alive meant pouring several litres of fluid into his abdomen four times day.

"It was especially tough knowing his illness, like the illnesses of so many kids in that community, was entirely preventable."

It was no surprise when Richard paid his own pay to Sierra Leone and Liberia to report back during the peak of the Ebola crisis.

Here's part of his story.

Richard has been no slouch when it comes to public health. He secured almost $5 billion towards Medicare-funded dentistry and won a campaign to divest $250 million worth of tobacco stocks from the Future Fund. He also spearheaded senate inquiries into key public issues such as dying with dignity, superbugs, hospital funding, budget cuts, medicinal cannabis, air pollution, pharmaceutical transparency, sports science and gambling reform.

Richard, his wife Lucy and two young sons live on a working farm in the glorious foothills of the Otways where he oblingingly complies with Italian tradition by making his own vino and olive oil. A bonus for Richard is that it’s close to Victoria’s famed surf beaches where he’s become a keen surfer following a knee injury which forced him to give up VFA football. 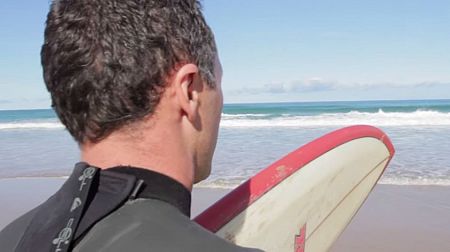 Richard set to rock 'n roll with the surf

The Greens’ new leader said he joined the Greens because the party offered a progressive, compassionate and optimistic vision for the future — rather like the man himself.

It’s hard to find anything to dislike about this humanitarian, food-loving, fun-loving, sports-loving family man, although the farmers’ hero, anti-CSG campaigner, NSW Greens Jeremy Buckingham, wasn’t so sure after Richard was elected leader:

I was going to put my full support behind new Greens leader @RichardDiNatale but then I discovered he's a Richmond Tigers fan. #collingwood

For more on the new Greens leader: