Do we want Australia to be known for compassionate solutions to asylum seekers or held up by the gutter press as a shining example of how to trample on “cockroaches”? If we want to stay the land of the fair go with boundless plains to share, how do we shift the narrative, asks Arrin Chapman.

Who do we really want to be?

THE AUSTRALIAN narrative is currently in a period of great flux. Our national days are rife with racial tensions and nationalistic antagonism. Coupled with divisive politics from a selfish elite, we are never quite comfortable with the words multicultural and asylum seeker.

This is not unusual. All nations change over time, redefining who they are and what they stand for. Even the ideals and values that underpin a society are interrogated, restructured and redefined.

Is there a way that everyday citizens can be more than simply passive bystanders and is there a role for protest in this creation of Australia’s national narrative?

Social upheaval is seldom without conflict but conflict takes many different forms. Civil wars are one of the more extreme examples of this. More often, however, in this country, it is achieved through active protest.

This country has a long history of protests from the volatile Eureka Stockade to Bondi’s Bathing Suits protest through to the Freedom Rides and in more recent years, Australia Day/Invasion Day protests. 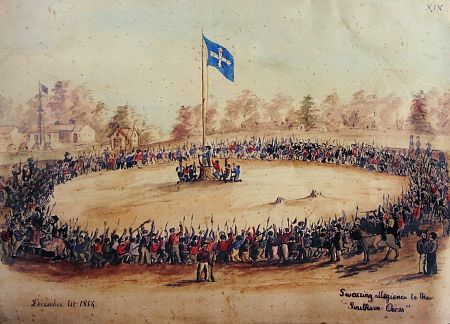 Governments often have little choice but to react to public opinion in these situations and the subsequent shift in policy reflects this. One need only follow the history of the White Australia Policy and its eventual removal to see this in action. Whilst not the only driver of these changes, protest is a fundamentally important one.

Is this how we want the world to see Australia?

Refugee and asylum seeker issues are unique in that they are global and as such the entire world will always be watching. For Australia, as one of the few "First World" countries in our region, it has become one of those issues that defines who we are as a nation both to ourselves and the world at large.

Controversial British columnist, Katie Hopkins, was reported to the police after her racist and vitriolic article in The Sun comparing North African migrants to "cockroaches" and applauding “Australia’s” solution. 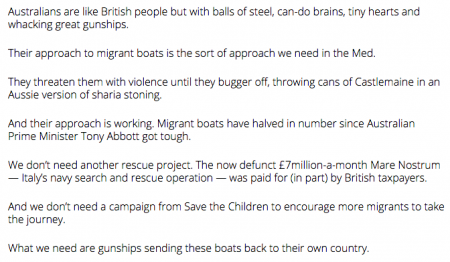 Excerpt from Katie Hopkins column in The Sun, 17 April 2015

The Hopkins’ article is an insight in to growing perceptions of us on the world stage. Whilst the column is a puerile Alan Jones style rant, her descriptions of Tony Abbott’s asylum seeker policy have a sad ring of truth to them.

an extract of the article on Katie Hopkins rant about asylum seekers; ashamed reading this #Australia pic.twitter.com/JaY2Yf33CR

Admiral Donato Marzano, an Italian navy chief, recently weighed in on the debate responding to the idea that Europe adopt an Australian style policy stance with the very human response of

He went on further to say that

'I intervene to help people at sea. I don't know if this reflects my Italian culture but I do know it is international law.'

This idea that Italians are inherently empathetic toward those in need is something that he is rightly proud of and is diametrically opposed to the view of Australia that Hopkins presents as quality attributes. It also shows how empathy can be weaved compatibly into a national narrative if there is the political will to do so.

Is this how we want our government to respond to criticism?

But it is not just journalists and foreign military who have been vocal about Australia’s policies in this area. In recent years, we have seen a spike in criticism from human rights organisations both internally and externally. A rational, self-reflective human being, particularly one who represents an entire nation, may take this on board and try to structure a new narrative that casts asylum seekers in need of aid as victims, not invaders.

Instead, Prime Minister Tony Abbott decries, on our behalf, that

‘Australia is sick of being lectured to by the United Nations,’

thus electing to pursue a stance that Australia is above reproach and correct in its actions. The power that our elected representatives wield in defining who we are and will be in the future cannot be underestimated, especially when they are encouraging other nations to follow our lead as if it were something to be proud of.

Sadly, the other major party appears to be just as morally corrupt. Bill Shorten recently commented,

'…I cannot also lie to myself, and I will not live in an intellectually dishonest world where I say that if we have policies which drag people here to hop on unsafe boats and drown at sea, well I'm not going to be party to that either.'

This shows that either he misunderstands push and pull factors or, in a case of classic "wedge" politics, chooses a harder stance in a vain attempt to compete with the Prime Minister.

There is not, as Admiral Marzano pointed out, any magic solution but there are much more humane and economically responsible ways of dealing with the situation as the Greens continue to point out.

How do we change the narrative?

This, of course, begs the question of what we as citizens can do — whether we are simply stuck at the whim of cruel, indifferent governments, passively dictated to by the powers that be.

Do we want Hopkins’ catchcall ‘It’s time to get Australian’ to be something that an endless legion of other Murdoch lackeys can brandish to show that trampling on the most vulnerable is what being Australian is all about or do we want to be known for compassionate and creative solutions? If we want the land of the fair go to mean something and truly believe we have boundless plains to share, how do we shift the narrative?

Simple. Join a march or a protest. The larger the number of protesters involved, the harder it is to ignore them. If the Murdoch media is moved to decry ‘Selfish Rabble Shut City’ as was the case with the WA Indigenous communities shut down rally in Melbourne, then enough noise has been made. 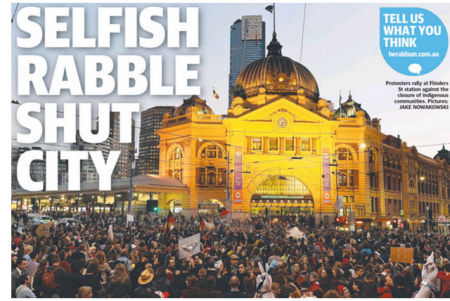 If this is repeated and consistent then it is eventually impossible to ignore. It might mean leaving work early one day to join a protest march or writing a letter to a member of parliament to keep up the flow of letters. If you need help, the Refugee Action Committee Canberra has a template that is practical and easy to use. And don’t forget to encourage your friends to do the same!

This problem will not solve itself, indecision as they say is a decision, no change comes from apathy nor does it come quickly. For change to happen its proponents must be seen, they must be loud and they must be determined. There must be enough unrest that the government has no choice but to act.

As activist songwriter and musician, Paul Kelly, once wrote about a now famous protest, ‘From Little Things Big Things Grow.’