Grexit and the impacts on the 'average' Greek

The effects of Greece's default today and possible exit from the Eurozone will be immense, not least on Australia's sizeable Greek community, writes UWS Professor James Arvanitakis (via The Conversation). 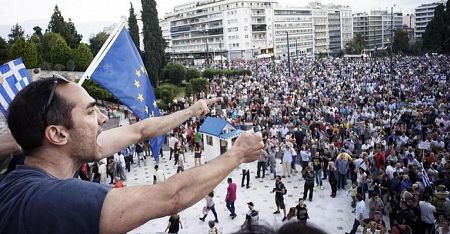 One of the major effects of Greek default and exit from the Eurozone could be political instability (Image via @Goldcore / goldcore.com)

THE GREEK FINANCIAL CRISIS and its broader implications have become stark as Greek Prime Minister, Alexis Tsipras announced the indebted country would not repay a €1.6 billion (A$2.34 billion) loan to the International Monetary Fund that it eventually defaulted on today, Wednesday (AEST).

By calling on the Greek people to vote “no” in a referendum this Sunday on implementing austerity measures creditors want, Tsipras is hoping that the Greek population will send a clear message to Europe that they will not be held hostage to creditors. But Greece’s departure from the Eurozone could be looming.

The aim then would be to stand even firmer in the negotiations. From the European bankers perspective, a resounding “yes” vote in favour of the “bailout” package, will mean that they will be able to place even stronger demands on Greece.

Between these two positions is the “average” Greek.

But who exactly is that? In my recent visit to both the Greek mainland and islands, the attitudes could not be more contrasting.

On one of the smaller and remote islands, the “crisis” barely rated a mention. Yes, there was awareness, but of the greater priority was the olives to be picked and the goats to be milked. There was doubt that tourism would stop, but then, there was doubt that the politicians would let it get to crisis point.

On Crete, the contrast was starker. In the historical Venetian town of Chania (Xavia), there was barely an empty seat in the hundreds of restaurants and bars. From mid-afternoon to the 3am close, the main strip along the harbour hummed with people and the discussions of the crisis barely rated a mention. Tourists shopped and Greeks served.

Two kilometres into the contemporary part of the city, the situation was very different. Shops were boarded up and the uncertainty was evident. According to Eurostat, Greece’s unemployment rate is 25%, with youth unemployment rate close to 50%.

Athens is another story all together: tourism is down and the discussion never strays far from the crisis. Opinions of the Syriza ruling party are split and opinions passionately divided — but one thing that everyone agrees on is that Germany owes Greece billions of euros for reparations from World War Two.

Despite this agreement, it is obvious that Greek society is beginning to fray as the neo-Nazi Golden Dawn party continues to garner support and clashes both with leftists, anarchists and immigrants.

But the social impacts are being felt well beyond Greece including the Greek diaspora here in Australia.

Greeks have been migrating to Australia ever since the gold rush years of the 1850s. While a quota system in the 1920s limiting the number of non-British immigrants meant a limit in the number of Greek migrants, post World War Two saw over 160,000 Greeks settle in Australia, mostly in Victoria. It is from this massive influx that Melbourne is often (incorrectly) identified as the second largest “Greek” city in the world.

But the connection between Greece and Australia is deeper than simply “numbers”. In addition to taking part in the Battle for Crete in World War Two, the movement back and forth of family and friends has established a familiarity between the two countries. High profile Australians including Gough Whitlam and Malcolm Fraser have calls for Greek artefacts to be returned to Greece, including the Parthenon Marbles from the British Museum.

For the Greek diaspora, the impacts are also quite dramatic.

To begin with, many are attempting to send money back to family back home. This is becoming an increasingly complex process given that ATM withdrawals remain capped at only €60 per person per day, banks are closed and queue for the ATMs are expanding then disbanding as the machines inevitably run out of money.

Further, there is the move to assist friends and relatives to migrate away from Greece to Australia. This comes at both a financial and emotional costs. Given the large and complex family networks, Australia’s Greeks are making difficult decisions about who to support and how much. This kind of decision making is heartbreaking and also tearing families apart.

And as I have discussed before, there are continuous signs that the Golden Dawn is also gaining support within the Greek diaspora. The unravelling in the homeland is also migrating.

There is also the impact on the diaspora’s identity. Greek migrants have pride in the role they have had in building the Australian (multicultural) nation. That pride is blended with a connection to a homeland that was the birthplace of democracy and the Olympic games.

Many Greek-Australians see themselves as having two homelands — but this sense is quickly disappearing. And what happens next is anyone’s guess.

James Arvanitakis is Professor in Cultural and Social Analysis at University of Western Sydney. This article was originally published on The Conversation. Read the original article.