Australia's population growth has several disadvantages — one of the main ones being environmental impact, writes Michael Bayliss.

AUSTRALIA IS ON THE CUSP of a major demographic milestone. Our population will reach 25 million by mid-August this year.

We were never expected to reach this “milestone” so soon. In 1999, then Minister for Immigration Philip Ruddock said that there was no need for a population policy as the nation was on course to reach 23 million "by the middle of next century".  Not only have we surpassed 23 million, but we are now heading to reach 40 million by 2050.

The consequences of rapid population growth are many. Housing security, job security, traffic congestion and infrastructure are all concerns increasingly felt by many Australians feeling the pressures of growth. It has been reported that population has become a primary political issue among voters this year.

Another casualty of population growth is Australia’s natural environment. If we agree it is impossible to have a healthy economy on a dead planet, then we should be paying more attention to the impacts of growth in our national backyard.

Australia’s population ballooned quicker than any other developed country on the planet from 1990 to 2017, during which time we have grown by 50%. At the same time, Australia is leading the developed world in terms of rapid land clearance. This is no coincidence.

Australia’s leading ecologists agree growth is a major driver of species loss and degradation of habitats in our country. Successive State of the Environment Reports (at both national and state level) have recorded ongoing deterioration of all environmental indicators; increasing population density, urbanisation and settlement patterns have all been cited as leading causes of this deterioration.

The koala and emu, both Australian icons, are fast becoming the poster animals of the victims of urban sprawl and the clearance of native habitat. It is no coincidence that their habitats overlap with the areas of most rapid urban expansion, for example the peri-urban areas around Sydney and Brisbane. It is anticipated that the continual urban expansion in NSW and Queensland will result in a crash of wild koala populations within several decades. We won’t solve this problem by putting solar panels on the new housing estates or hybrid cars on our roads. Endless urban growth corridors will wreck native habitats, regardless of how “green” these new developments are — and most new suburbs are anything but green.

If the impact on other species is not a strong enough motivator for change, perhaps we should consider the impacts of growth for future generations. Take Melbourne, Australia’s fastest growing capital city, for example. Continued urban sprawl will reduce the city’s food bowl capacity significantly — from 40% now to around 18% by 2050.

Last year, our emissions grew by 1.5%, whilst the population grew by almost the same amount. The figures speak for themselves. If we grow by the size of a new Canberra every year, our emissions will go up regardless of how innovative we are, or how many plastic bags we no longer use.

This highlights the many difficulties for rapidly growing nations such as Australia to meet their responsibilities under the Paris Agreement. For example, to meet the agreement, Australia will need to reduce national emissions by 30% over the next three decades. Adding an extra 50% to our population over the period will make this monumental task even more difficult to achieve, and likely to mask any gains achieved in fuel and energy efficiency over the same period.

The “creeping normalcy” of both densification (more apartment blocks) and urban sprawl are easy to overlook against our busy pace of life. At 1.5% per annum, population increase can appear gradual against the rapid rate of change in our world. But the changes over a decade leave a tangible and permanent legacy on our landscape. The remaining strands of forest and open space on the urban fringe will be swallowed by housing estates, while productive farmland is converted into roads and concrete. The hasty planning and development that accompanies rapid population growth locks future generations into high carbon living. 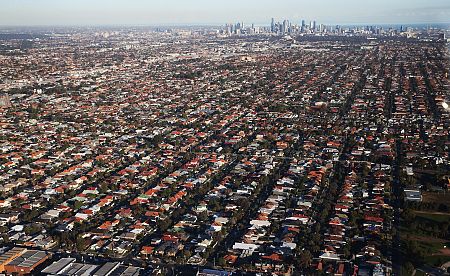 From an aerial perspective, it's staggering to see how far the population of Melbourne stretches out (Image supplied)

It is often asked: what is Australia’s optimum population size? Whilst this can be difficult to quantify, most of us can agree that Australia cannot grow at 1.5% per annum indefinitely — the laws of physics do not allow for exponential growth on a finite space.

The idea that Australia is a continent of empty plains and that we can solve the problem by moving inland does not hold up to scrutiny. Australia is the world’s second driest continent and our only major river system, the Murray-Darling basin, has a fraction of the water flow compared with other major river systems, such as the Mississippi. We are also one of the least fertile continents on earth, with only 6% of our land area being arable, mostly around our capital cities and on the coast. It is these very areas that are being encroached on by urban development. It is not viable to densify much of Australia and to suggest so makes almost as much sense as developing Antarctica.

It is critical that, as a nation, we can move beyond the assumption that we need to keep growing for growth’s sake. It is necessary that we reduce and level off our carbon emissions, the rate in which we destroy our ecosystem and native habitats, and the rate in which we concrete over our food bowls. This requires a transition to a post-growth economy, where our per capita consumption and our population remain stable. Only then can any improvements to technology and efficiency have any lasting impact.

Population growth, congestion and infrastructure is currently a hot topic in Australia. For instance, the Federal Government is drafting a population policy, which is generating debate, while Infrastructure Australia has released a…https://t.co/4TYkQ4Ea58 https://t.co/ku4BU4eFqc

The good news is that a fair and equitable population policy can be achieved in Australia. If the natural birth rate and our humanitarian intake remained at current levels, Australia would have a long-term stable population. We can have a total migration intake per year of up to 70,000 and still achieve a stable population. Population policy is not about forcing Australians to have one child, or turning back the boats. The main driver of population growth is economic migration, which is mostly built around increasing short-term GDP (at the expense of future generations). A population policy that decouples growth from the ambitions of big business makes sense on very many levels.

Using migration as a means of dissipating population pressures in other parts of the world has no impact and doesn’t help the millions who are left behind. As the world population increases by over 80 million per year, this is very significant. Australia’s best contribution to global population pressures is by contributing to proactive, non-coercive foreign aid. This includes partnering with communities worldwide to work together towards mutually beneficial low carbon futures, in which empowerment of women and access to affordable family planning services play a key role. Currently, our foreign aid budget is at an all-time low, whilst our infrastructure budget, to cater for our domestic population growth, is at an all-time high. Our priorities need to be the other way around to a have any meaningful long-term impact.

If we are to revisit our population policy, the time is now. A recent report has highlighted that many of Australia’s ecosystems are on the point of collapse due to human impact. Doubling our population in 35 years will only accelerate this degeneration. Population plays a role and we must act immediately.