A major urban development on the Gold Coast is moving in on a natural koala habitat whose residents are under mortal threat, writes Sue Arnold.

PICTURE THIS. A female koala with her very young joey in pouch climbing rapidly down from their peaceful eucalyptus roost, terrified by a big long stick waving black flags at her. As she approaches the ground, her cries of terror and stress echo through the forest.

Council personnel and a scientist grab the koala, shoving her in a bag. She’s taken to a field where a mobile operating clinic has been set up, given a general anaesthetic while her body is probed, paws shaved, blood samples taken, the tiny joey somehow expected to survive the trauma visited on her mother.

If the koala is deemed healthy, then, along with at least another 170-180 and possibly as many as 252 koalas (according to Gold Coast Council records — all the numbers translocated are rubbery and contradictory), she is taken on a road trip some 40 minutes away and released into a forest hinterland. A foreign environment where wild dogs roam, subsequently killing a total of 23 koalas, which were predated by wild dogs within four months following relocation.

Koalas suffer ugly, savage, cruel deaths being torn apart by dogs. Mothers and joeys with no ability to defend themselves.

And the purpose? To enable a large-scale translocation program to proceed ensuring that a nationally significant koala population didn’t get in the way of massive development in Coomera-Pimpama in Southeast Queensland.

In 2006, Coomera-Pimpama sustained a healthy viable population of over 500 koalas living in a peaceful 2,148-hectare area designated as Urban Koala Area (UKA).

According to the 'Conserving koalas in the Coomera-Pimpama Koala Habitat Area: A view to the future' final report for Gold Coast City Council 2007, undertaken at that time:

‘The koala population was in excellent condition with a high level of reproductive success and few outward signs of disease.’ 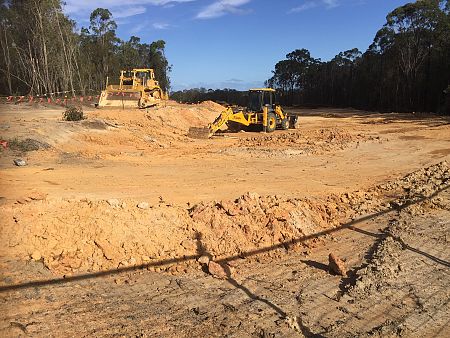 But the Gold Coast City Council and the Queensland Government had other ideas for the area.

The intent of the Coomera Town Centre, according to the published blurb, is:

‘To create a transit orientated activity centre focused on street life, an interconnected network of public streets, 25,000 dwellings for an additional 50,000 people.’

Plus a Westfield shopping mall.

The South East Regional Plan 2009-2031 recognised Coomera as a regional development area for employment and residential growth. Gold Coast City Council had promoted the development of the Centre for several years. In fact, East Coomera had been identified as a future major regional activity centre since the 1980s.

Research undertaken for the City of Gold Coast in 2006-07 found East Coomera supported one of the city’s largest koala populations, with over 900 hectares overlapping with the planned new Coomera Town Centre and surrounding urban area. A decision was made by the Gold Coast City Council to move the koala population interfering with development to Lower Beechmont Conservation Area and Wongawallan Open Space Area, lengthy distances from the koalas’ home range.

It’s important to remember that koalas are faithful to their home ranges, with joeys learning the secrets of their diet from the mother’s pap, which identifies the favoured species of eucalypt.

There's serious concerns for Coomera's koalas, with the growing number of new developments in the area. https://t.co/hPHylpjJZM @Carly_Madsen #7News pic.twitter.com/Do3EoCkFPI

Translocations in Australia have a long history of disasters with scientists vigorously opposing the removal of koalas from their home ranges. A transcript and footage of this large-scale translocation are available on ABC Four Corners documentary filmed in 2012 entitled, Koala Crunch Time.

It makes for heartbreaking viewing. The following are some select quotes from the episode.

“The research and translocation project has been financed by the Gold Coast City Council. And it's proud of its solution to Coomera's koala problem.”

"We're here to be fair to the developers and we're here to be fair to the koalas. We don't want to fight with people. If the relocation is doable, and after monitoring this 100 koalas that the survival rates is good as per natural attrition and that they're happy with it, then it gives me heart that we can continue on with that and without any conflict with the with the urban developers."

“I mean, it still is a Japanese scientific whaling approach to dealing with the problem of bad planning decisions over East Coomera. Now you know they've been coming down the track for a while but it wasn't till very late in the piece that somebody said ‘oops there are a lot of koalas there, what on earth are we going to do about them?’” 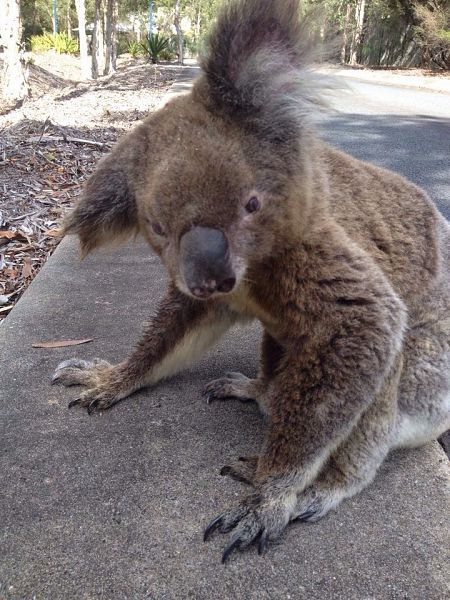 A distressed Coomera koala, one of many being relocated to even greater danger (Image supplied)

The only way the Gold Coast City Council could proceed with this massive translocation project was to obtain scientific permits supported by an Animal Ethics Committee Approval. Given there are no provisions under the Queensland's Nature Conservation (Koala) Plan 2017 which supports translocation so development can proceed, the subsequent approval by the State Government should have been legally challenged.

There are no current surveys of what happened to the translocated animals.

I wrote to every Gold Coast Councillor the last time the Coomera koala habitat was threatened and the koalas were translocated. Some replied, but most didn’t bother, spin and crap was most of the replies.

Most of the koalas translocated did not survive, taken by dogs, killed on roads or died from lack of appropriate food. Now they want to destroy the last bit of koala habitat, what can we do to stop this? It upsets me as a wildlife carer to see this happen in the name of greed.

No peer-reviewed published paper exists on the translocation project. A successful outcome would have made conservation history. Nor is there any evidence of regular annual monitoring.

IA has attempted to obtain the scientific permit(s) and Animal Ethics Committee Approvals from the Gold Coast City Council.

“Whaddya want them for? Why? No, they’re not available.”

IA’s request for details of the membership and location of the relevant Animal Ethics Committees involved was ignored by Council staff.

@AnnastaciaMP THE #COOMERAKOALAS MUST BE PROTECTED, DO YOUR JOB OR LOSE MY VOTE, EXTINCTION IS FOREVER, PROTECT THEM BEFORE ITS TOO LATE pic.twitter.com/8jqD4tSeln

In the 2007 Report, the following projection is made:

'Development of the proposed Coomera Town Centre and associated residential infrastructure within the UKA will invariably involve the removal and/or modification of 1,035 ha of native bushland and displace approximately 356 koalas over the next 10-15 years. This will potentially result in the death of at least 106-178 koalas (assuming 30-50 per cent mortality of the current population within the UKA).'

Contradicting this projection, a further survey, the East Coomera Koala Population Study 2017, by the same company, concluded that the remaining population was still in the vicinity of 500 koalas. The 2017 survey report has been heavily redacted by the Gold Coast City Council.

The survey’s results have been challenged by David Paull, an experienced koala ecologist:

“With a third of the habitat removed due to urbanisation and more than half the population translocated, any conclusion that the population has completely recovered doesn’t make sense.”

With vehicle strike mortality escalating together with disease caused by stress, dog attacks and more development being undertaken, remaining koalas are fighting a losing battle to survive.

A Japanese developer (EPBC Referral 2017/8134) has bought 147 hectares of primary koala habitat in Coomera — an area which is an important home range and connectivity for koalas. On 137 ha, plans have been made to build 3,722 dwellings, four neighbourhood nodes for retail and commercial use, together with trunk and non-trunk roads. The Federal Government is currently considering approval.

Incredibly, the Federal Department of the Environment has accepted the heavily redacted survey 2017 report from the Gold Coast Council without requesting the document be un-redacted as part of the consideration of the project.

In 2018, it’s ground zero for the remaining Coomera-Pimpama koala population and, if an independent inquiry was set up, the outcome would likely also be ground zero for the politicians and governments involved. The evidence is irrefutable, demonstrating an epic history of deliberately orchestrated policies of extinction that have been adopted by the Queensland, NSW and Federal Governments.

Jobs and growth versus koalas and wildlife. A no-win contest for the animals. 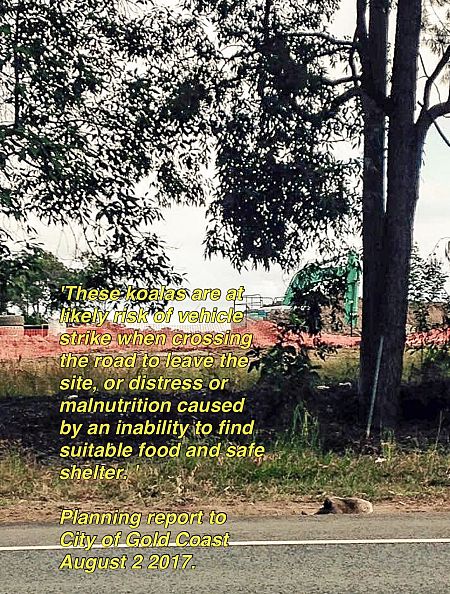