One foolish phrase has put Prime Minister Malcolm Turnbull’s prime ministership in peril — yet, bizarrely, one equally stupid statement may save him.

In 2015, in a characteristic piece of vainly impetuous overreach – like when he said the “High Court will so hold” about Barnaby Joyce’s citizenship – Malcolm Turnbull offered losing “30 Newspolls in a row” as the reason the Liberal Party should discard Tony Abbott as PM.

“It is clear that the people have made up their mind about Mr Abbott's leadership,” added Turnbull.

Whether or not it was right for Turnbull to displace a first term sitting prime minister, he was right to say the public had made up its mind about Abbott, who was – and still is – a boorish fool and an unmitigated embarrassment.

But now that Turnbull has suffered the same succession of negative News Limited opinion polls, it is just as true to say that the public has made up its mind about his leadership. That they have decided he is a pompous and unprincipled plutocrat, who has done little other than promise and prevaricate. Who has been unable or unwilling to stamp a kinder and more moderate complexion on his Party’s harsh and unyielding face.

And so now, the public, fatigued by years of chaos, controversy and outright corruption, simply want to say goodbye to the Prime Minister and his fellow kleptocrats. Bid farewell to the ones who want to give rich corporations a $65 billion tax cut as they pursue and prosecute poor people for fictitious 15 year-old debts. Say adios to the ones who cut spending on the needy, and torture children in overseas gulags, while spending $500 million on memorials to the dead. Who cycle around the country carpet-bagging for new coal plants, while the rest of the world closes theirs’ down. In a perfect world, we would be able to call an election and make all this madness a memory. Sadly, this is far from a perfect world.

Yes, the people are tired and want change — but not just of one man in one job. The reason why Newspoll is bad is not just Malcolm, bad as he is, but rather the deep unpopularity of his Party and its misanthropic policies.

On the other hand, it can’t be denied that Turnbull used Newspoll as a reason for staging his coup, so if the Liberals were truly a Party of principle, he would probably be gone. But, of course, as we know, the only firm principle for a conservative is to win — everything else is subject to negotiation.

'The Victorian pairing controversy confirms that conservatives really have only one principle — to win at whatever cost, writes managing editor Dave Donovan.' @davrosz @independentaus #auspol https://t.co/rbsrpY3RPa

Turnbull will therefore remain until the next election, despite the manifest hypocrisy and painful cognitive dissonance that must accompany such inaction.

That’s because, as mentioned before, there’s another phrase that shelters him — the following:

“Australians do not want to return to the chaos and dysfunction of the Rudd-Gillard-Rudd years.”

This mantra has been used so many times by Turnbull and his colleagues over the last few years, it is now indelibly imprinted into Australian minds. (Of course, this is the Liberal way — to repeat a phrase over and over again until it becomes incredibly annoying and then keep on repeating it until it attains the status of “fact” within the public consciousness.)

Yes, Turnbull is safe — for now. Because if he is toppled, the Liberals become the same “chaotic and dysfunctional” rabble that they have branded the ALP so effectively.

If they remove Turnbull now, just like Rudd-Gillard-Rudd Governments did, they will have

So if they go down this path and topple another PM, their credibility will be shot. They will become the very thing they demonised —and even the dullest voter couldn’t fail to gather that. Any slim possibility of a late resurgence before the next election will promptly disappear — even with a Bishop, assuredly with a Morrison and most particularly with a granite-hearted Easter Island statue like the demonic Dutton. Even though the Liberals despise and want to replace Turnbull, they won’t, because if they did they would be exposed as fools and hypocrites by virtue of their own hateful rhetoric. The irony is close to magical.

Of course, this week we also heard Barnaby Joyce suggesting that if Turnbull doesn’t turn things around by Christmas, he should “do the honourable thing” and step aside (Barnaby being a world-renowned expert on honour and duty). Joyce, as we know, despises the PM now after Turnbull condemned his infidelity in February and asked him to “consider his position” as the then deputy PM. Joyce, no doubt, wants to see the return of his old mate Tony Abbott — the bloke who labelled the Beetrooter as Australia’s “best retail politician”.

.@TurnbullMalcolm: @Barnaby_Joyce is free to give his advice, however I will be leading the Coalition to the next election.

If Abbott does return in the lee of an election, then the final piece of the puzzle will fall crushingly into place. The Liberal Party will have precisely repeated the Labor cycle — Rudd, as you will recall, was similarly resurrected in 2013. Like Rudd, Abbott’s new reign would be brief and his electoral defeat crushing. Were it to occur, the last few years would no doubt become known as “the chaotic and dysfunctional Abbott-Turnbull-Abbott years”.

But this is madness and near unthinkable. It would burn through the last frayed threads of Coalition credibility in this country in an act of incomprehensible electoral suicide. Then again, these are crazy times…

Let’s just say, barring acts of collective conservative insanity, Malcolm Turnbull is safe — for now. His Party will stick with him until the election through thin and even thinner. And, all the while, we will be forced to miserably wait, while the Liberals cynically lurch into one last rapacious spree — plundering the treasury, enriching their friends and putting acolytes in positions of power and influence throughout all the institutions of state in advance of their inevitable dismissal.

Unless Turnbull decides to end our misery and call an early election. But then, when has he ever cared about what we want?

This editorial was originally published as part of the Independent Australia weekly newsletter. Editorials are usually only available to subscribers. It takes less a minute to subscribe to IA and costs as little as $5 a month, or $50 a year — a very small sum for quality journalism and many great extras. 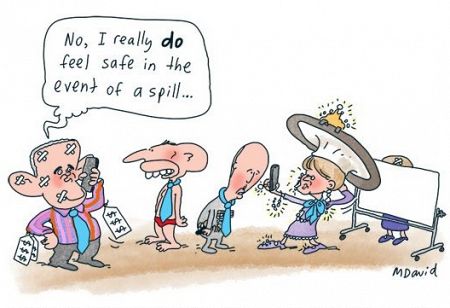