Big Business hasn't just decided to get into the political game, as some have claimed, it has been influencing our politics forever. But as managing editor David Donovan says, the methods it has lately adopted are highly troubling.

‘The Business Council of Australia (BCA), the lobby group representing Australia''s largest companies, has decided to do politics.’

Really? They have just decided to “do politics”?

Of course not. The Business Council has been doing politics every day since it was formed in 1983.

Indeed, the Business Council’s stated reason for existence is

‘… to give the business community a greater voice in public policy debates about the direction of Australian society’.

Business Council of Australia to ramp up role in politics. #abc730 @latingle https://t.co/37QdERXqTg

While it says “business community”, since it only comprises 130 of the largest listed companies in Australia, it actually only represents Big Business. In fact, since it doesn’t represent small Australian businesses in any way, it should really call itself the “Big Business Council” — which is what we will be doing throughout this editorial.

And because owning all the capital and means of production isn’t enough power for the Big Business Council, they also need a

‘... greater voice in … the direction of Australian society.''

All of which sounds distinctly political.

Although this is not to say the Big Business Council is exactly the same thing as the Liberal Party. Sometimes, the BBC will even work with the Labor Party to pursue its agenda, like it did during the Hawke-Keating years. (It’s nothing personal, it’s just bid’ness!) Just that it's much easier for the Big Business Council to work with the party of big business ‒ to which it donates heavily and does exactly what it tells it to do ‒ than a party that represents workers, which it despises.

In recent years, the Big Business Council has promoted such Liberal policies as implementing WorkChoices, eliminating penalty rates, restoring the ABCC, axing the mining tax and carbon price, and too many others to mention.

And if you look at its website today, the other policies the Big Business Council advocates are identical to those of the Liberal Party. Right now, just like the Government, it is on a mission to ram through a $65 billion company tax cut for its members, including to our criminal banks.

They both claim that this is just because these are good policies — because apparently, as the Big Business Council says in its latest mawkish advertising campaign:

Which sounds a lot like what General Motors CEO Charlie Wilson allegedly told President Eisenhower in 1953:

“What’s good for General Motors is good for America.”

So, despite company tax rate cuts being a solution without any problem, the Big Business Council has decided to step up (not start) political campaigning on behalf of the Liberal Party. They are doing this because, even if the limp Turnbull Government does manage to get these cuts through before the next election ‒ which seems doubtful ‒ Labor has promised to repeal them if elected, as they look very likely to be.

And in Senate Estimates last week, Big Business Council CEO Jennifer Westacott revealed she and BBC president Grant King had met with disgraced political fixers Cambridge Analytica in the U.S. last year. At the same hearings, mind you, Westacott could not name a single country in which company tax cuts had resulted in wage rises, taking the question on notice.

Well, in the South Australian election held on 17 March, a so-called “community organisation” called “For the Common Good” successfully campaigned for the election of the Liberal Party in that State. On 27 March, safely after the election, Jennifer Westacott triumphantly revealed For The Common Good was a front for the Big Business Council. It has since been revealed that another linked BBC organisation, Centre Ground, also covertly campaigned for the Liberal Party in the South Australian election.

So much for the Big Business Council being non-political and non-partisan.

Hola there is your unroll: Thread by @KKeneally: "In today’s @australian - Jennifer Westacott claims “For the Common Good” as the BCA’s new grassroots campaign initiative […]" https://t.co/kROaHT1qSU
Have a good day. 🤖

Yet, in a bizarre twist, the Liberal Party is still trying to force GetUp! to declare its funding, on the basis of it allegedly being “an associated entity” of a political party. That’s because its issue-based campaigns against Coalition policies apparently benefited two parties — Labor and the Greens. It seems everyone who opposes them is the same to the Government. The Turnbull Government is also trying ‒ characteristically unsuccessfully ‒ to tie it up in red tape through passing new foreign donation laws.

The reality is that GetUp! is a true grassroots organisation with over a million individual members, almost all of whom are Australians. Its policies are determined by these members via extensive surveys and not by any political party. Indeed, many times, its policies – including on offshore detention, same sex marriage, the environment and even Julian Assange – diverge from those of the Labor Party and/or the Greens.

The average donation to GetUp! is well under $40.

The Big Business Council, on the other hand, has just over 100 member companies. A recent study showed that 57% of the equity in those companies is owned by overseas investors. In other words, the BBC is majority foreign-owned.

The Big Business Council is asking its 130 members for $200,000 each to raise $26 million so that it can, again in the words of Laura Tingle, embark

‘… on an unprecedented level of political campaigning in the run up to the next federal election, committing to a program of television advertising, television programs, town hall meetings and direct grassroots campaigning in marginal electorates to promote business-friendly policies, like lower company taxes.’

The television program mentioned, Strong Australia, is described by the Big Business Council as

‘… a partnership between Sky News and the Business Council, [it] is a television program hosted by Sky Political Editor David Speers. Business Council members are embarking on a roadshow across the nation to regional areas.’

The BBC have reportedly paid Rupert Murdoch $1 million to air this outright propaganda.

since when do grassroot campaigners pay Sky News $1 MILLION DOLLARS to organise and broadcast ‘town hall style’ meetings? what a joke!
>>Business Council of Australia to ramp up role in politics - The New Daily https://t.co/mFcO2FKd5e

Unlike GetUp!, the Big Business Council has already shown itself to be happy to meet with crooks like Cambridge Analytica and use covert methods to get the Liberal Party elected.

Also unlike GetUp!, the Big Business Council doesn’t care about improving Australia for Australians, but merely about improving the bottom-line for its mostly foreign shareholders. It is, in effect, an attempted political takeover by foreign “agents of influence”.

So much for Sam Dastyari and China.

And yet despite all this, the Liberal Party sees no contradiction in trying to outlaw GetUp! while, at the same time, applauding the efforts of the the Big Business Council.

Indeed, the Liberals have positively urged the BBC into action, as Tingle noted:

‘Under siege from senior figures in the Liberal Party for failing to promote business-friendly policies — and support the Coalition — and seeing the prospect of company tax cuts for the big end of town ebbing away, the BCA has decided to go on the front foot.’

The hypocrisy is staggering.

This is only half the story! The full version of this editorial, originally published as part of the Independent Australia weekly subscribers'' newsletter, may be read in the IA members only area. It takes less a minute to subscribe to IA and costs as little as $5 a month, or $50 a year — a tiny sum for quality journalism and many great extras! 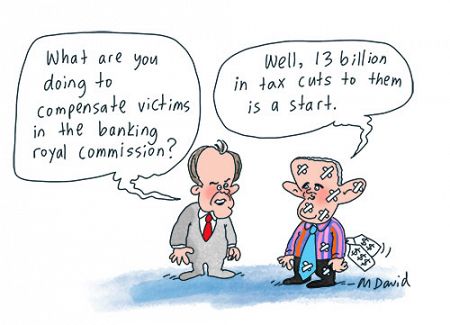 Nonsense. You aren't centre and you don't speak for me or the millions of other business-owners in Australia, just 130 of the big businesses, most of which are foreign-owned.