The mainstream media is pushing hard for the fiction that the Coalition competently manages the economy, as Alan Austin reports.

“The secret that Trump knows is that if you’re going to lie, go big. Right? Don’t waste your time on niggling little prevarications. Go big. And then what you do is wait for the obsequious toadies to come along and rationalise your lie.”

That sage advice on how to steal elections has been taken to heart by the Morrison Government and some journalists in Canberra’s Press Gallery.

The "big lie" in Australia is that the Coalition manages the economy better than Labor. It is a tried and true tactic, asserted repeatedly in every election since 1974. It was not true then and has not been true any time since. 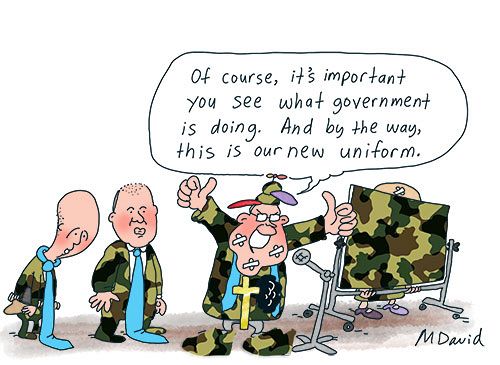 The Coalition would have us believe that Australia's financial ombudsman is on the money, but it's an expensive and elaborate charade, writes Dr Evan Jones.

The economic evidence overwhelmingly indicates the opposite. Independent Australia has collected testimonies of more than 160 economists, academics, world leaders and other authorities who believe Australia’s Labor Government generated the world’s best-performed economy through the Global Financial Crisis (GFC). The dossier keeps expanding.

Just recently added to the pile is this analysis from the University of Alabama:

The Australian economy was the only one of 33 advanced economies around the world that had not gone into recession as a result of the GFC. Compared with other OECD countries, the size of Australia’s stimulus package as a percentage of GDP was by far the largest ... [This shows] how successful the stimulus package has been in mitigating the effects of the GFC ...

Australia is confronted with a monumental lie, with many facets.

“Australia is experiencing a jobs boom with around half a million jobs created since September and the unemployment rate has come down to around a 13‑year low at 4.6% ...”

This needs at least six correctives. First, jobs “created” since September are 310,200, according to the latest ABS jobs data. Second, that follows the disastrous loss of 303,500 jobs between June and September. The actual increase over the last two years is just 233,700, an increment of an abysmal 0.9% per year. The last time an increase that low occurred before the Coalition took office was in 1997.

Third, the jobless rate is distorted by the collapse in migration. Fourth, the published employment numbers include tens of thousands of “workers” doing zero hours. Fifth, the decline in full-time jobs masks the severe decline in total hours worked. And sixth, comparing jobless rates now with the Labor years ignores the vastly different global jobs markets. 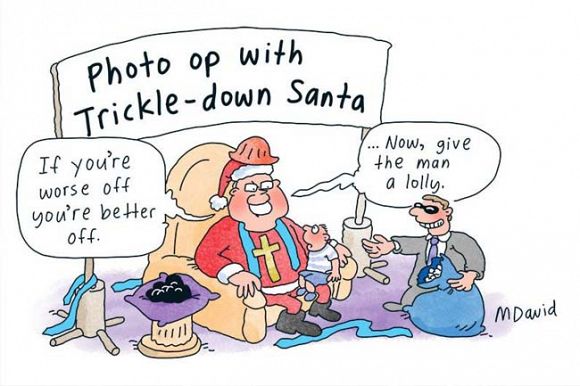 The craven pro-Coalition media are already giving the Government a big tick on jobs. An editorial in the Australian Financial Review (AFR) just after Christmas claimed:

Yes. But that growth follows the worst decline in history. Does anyone remember the AFR headline in 2020: 'Coalition mismanagement costs Australia 856,000 jobs in two months?'

Of course not. It was covered up. If the media does not blame the Coalition for the worst collapse in employment on record in 2020, it is totally dishonest to give them credit for a partial recovery now.

Morrison assures listeners at every opportunity that:

“Under a Liberal Nationals Government, you will always see lower taxes than from the Labor Party.”

The data is clear. Taxes have been higher under the Coalition.

'By March or May ... Mr Morrison will still be hoping to capitalise on the economic boom that chief executives are expecting in 2022 ...'

This deception focuses on future growth that might happen rather than the disastrous actual growth now. The latest quarterly GDP growth, for September, was negative 1.9%. That was the third lowest in history, ranking 36th out of 38 OECD members. In 2009, under Labor, Australia ranked first. 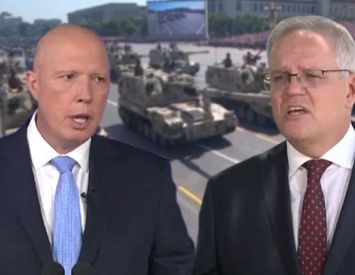 In fact, the Morrison Government is responsible for the highest spending on record. The media, obligingly, has overlooked this.

Claiming promises are evidence of competence

In perhaps the biggest lie in its mendacious editorial, the AFR asserted:

Really? The Coalition has never succeeded in delivering military hardware on time, within budget and fit for purpose. The AUKUS “deal” is the third forlorn attempt at a contract to procure submarines. Multiple billions have been lost already with delivery still decades away.

To assert that the Coalition is better at economic management than Labor is a whopper of Trumpian proportions. Let’s see if it works.