Once more unto the breach, they go! Those brave defenders of the Crown, Jai Martinkovits and David Flint, are now taking on the Girl Guides Movement. Senior correspondent Barry Everingham comments. 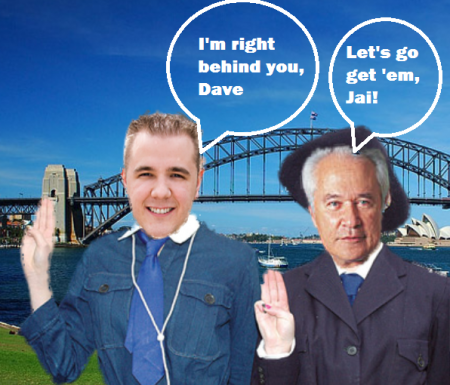 When I heard on the radio yesterday that the Australian Girl Guides Movement is to remove the oath of allegiance to our foreign non-resident unelected head of state, I thought: here we go again, Flint and Jai, his baby faced sidekick, will be in full flight!

How right I was.

The head of the Guide movement told the media the decision had been made after a survey taken at the grass roots level to drop the out- dated – some would say insulting, oath.

But in line with their basic insecurity surrounding any changes to royal nonsense – the dynamic duo  now wants  the Guide movement to release the methods of their findings of the research which showed the concerns ( about the retention of the oath).

Fair dinkum (that’s an Aussie term, David) who do these guys think they are?

What convoluted right do they think to have to demand an autonomous organisation display their methods to a gaggle of blue-rinse, upper North Shore, sherry drinking troglodytes, whose time, in the main, has passed?

David Flint goes to great length to distance himself from any political allegiances, but it’s obvious he is in the thrall of the fanatical right of the Liberal Party

At the mention of Cory Bernardi’s, name David goes ape — he can’t contain himself. Bernardi is perhaps the most egregiously racist member of the Abbott cabal, running a close second to the foul-mouthed insensitive Sophie Mirabella – both firmly wedded to the Flint camp and his out dated beliefs.

God only knows what the good matrons of ACM would think of Mirabella’s language when she is cornered.

After her apparent indifference to the plight  of Get Up,’ Simon  Sheikh on a recent Q &A episode she was castigated locally and internationally with particular reference being made to the allegations of the $M1 controversy surrounding  the Will of her former lover Professor Colin Howard, QC.

Flint was being his usual careful self yesterday.

He obliquely tried to criticise the appointment of the distinguished former Commissioner of Victoria Police, Simon Overland, to a position in Tasmania’s public service.

But not a mention of Overland in his story — no way.

He sidestepped that one.

He published a story about the “inappropriate” appointment of former diplomat Richard Butler to Hobart’s Government House.

Set the scene old Dave did — kept those manicured hands so clean.

Instead, he linked to an editorial in The Australian predictably criticising the Overland appointment.

So ACM is back in town — ridiculous and insulting demands from the Australian Girl Guides Movement to reveal its research methods.

Then an underhanded swipe at a State ALP government for making a totally standard public service appointment concerning a man of impeccable reputation who was knifed in the back by a National Party politician and News Ltd.

Flint must try to do better — he really is losing it, but I guess he’s still swooning from the celebrations for the 60th Anniversary of the reign of his all-time pin-up girl.