At the National Press Club (NPC) on 26 August, the Minister at the Chinese Embassy in Canberra, Wang Xining, delivered a cleverly crafted address containing a pathway to parlay after months of Prime Minister Scott Morrison mudslinging at the Chinese Government following the LNP fear of catching the coronavirus.

The event was organised by China specialist and former diplomat Peter Phillips, who, along with other retired Australian diplomats, is concerned at the ignorance and Right-wing ideology now governing our most important diplomatic relationship.

The embedded LNP media, known as the mainstream media (MSM), present at the NPC either chose to ignore the invitation to parlay or it passed over their heads.

The invitation was subtle but it was not obscure. Former Department of Foreign Affairs and Trade (DFAT) colleagues, watching on TV or present at the NPC, picked it up.

Allan Behm, formerly of DFAT and Defence and now head of international and security affairs at the Australia Institute, writing in The New Daily on 29 August, said Wang Xining’s speech was a clever, measured and thoughtful contribution to the conversation that Australia and China need to have. He outlined four principals that Wang set out to promote the partnership: respect, goodwill, fairness and vision and noted he offered the good offices of his embassy ‘in getting ministers talking to each other’.

Right-wing MSM journalists managed to miss all of this, instead running the LNP/Murdoch China-bashing line. Channel 9's Chris Uhlmann claimed Trade Minister Simon Birmingham had made approaches to the Chinese seeking dialogue.

I contacted Birmingham’s office seeking details of these alleged approaches.

‘The Minister said late last week: “There have been at least half a dozen requests for ministerial conversations since late April, including a request I made in writing as recently as last week.”’

I did not find this advice enlightening so I responded:

‘Thanks, Benn. Who were the requests made to? Who was written to? All the best, Bruce.’

‘Requests for meetings with Commerce Minister Zhong Shan. These have been either direct correspondence or requests through our embassy in Beijing or their embassy.’ 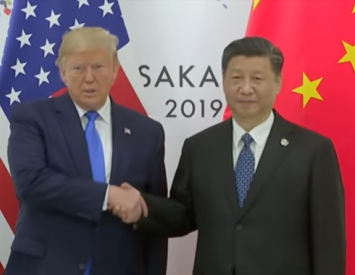 To which I asked:

‘When were the approaches to the Chinese Embassy in Canberra? Written or verbal? At what level? Were they formally acknowledged? Who made them? The Minister's office or DFAT?’

‘Sorry Bruce, but we are not going to go into that level of detail. Cheers, Benn.’

That made no sense to me. During the course of a 23-year career in DFAT, which involved briefing ministers and ministerial advisers, I cannot recall the provision of such simple and straightforward information not being provided under the circumstances prevailing in this matter.

Thanks, Benn, but surely you need to establish the veracity of your claims. Otherwise they remain hearsay. When I was in DFAT it was par for the course to back up claims by the minister in matters such as this. In those days, the MSM was tougher and more professional in pursuing ministerial statements.

What is being said here is “trust us”. As you will appreciate, the stakes are high and “trust us” under the circumstances does not cut the mustard.

The Chinese Minister, Wang Xining, says as far as he is aware no approach has been made to the Chinses Embassy in Canberra, to facilitate ministerial contact. My reading of his statement was that he was offering to facilitate an approach.

So who is dissembling, Wang Xining or Simon Birmingham? This is a very serious matter in terms of the bilateral relationship. Would you like to reconsider your advice? All the best,  Bruce.

I heard nothing further so I rang him, but no further details were forthcoming.

Under the circumstances, I have concluded that Birmingham’s office is not telling the truth. Birmingham has made no approaches and why?

Birmingham is not the brightest or strongest person on the front bench. Who might have lent on him and why?

Could it be that those dictating Australian policy toward China do not want a rapprochement? Who are they? DFAT is seen by Right-wing think tanks and consultants as weak on China. It is weak, but not just on China. Marise Payne is one of the most insipid Foreign Ministers Australia has had for some time, morally and intellectually. Probably not since Tony Street have we witnessed such a poor performer in that role.

The finger of suspicion must fall on the Right-wing Australian Strategic Policy Institute (ASPI) which has been rabid in its contrived public attacks on China. But ASIO, ASIS and Border Force must share responsibility, locked as they are, into U.S. President Trump's visionless future for the region and anti-China posturing.

Grasp this. Trade Minister Birmingham appears not to be making any move to restore the trading relationship with China. This may be because the Right wing, both in Parliament and through the likes of ASPI, do not want him to and may have applied pressure for him not to do so. If Australian Right-wing organisations believe they can punish China, they are delusional.

They might like to explain their thinking to the National Farmers' Federation, wine, beef and barley producers. Such thinking, if it is abroad, would be totally at odds with the national interest. It would represent a self-indulgent and destructive Canberra power play, with billions of trade dollars at stake.