Senior public servants at the crack Departments of Foreign Affairs and Trade (DFAT) and Defence are understood to be in despair at the continuing rift between Jakarta and Canberra and are claiming Prime Minister Tony Abbott’s refusal to attend this week’s meeting Bali has exacerbated the already fragile situation.

Abbott was originally invited by President Susilo Bambang Yudhoyono (SBY) to be present at the May 16 meeting of the Open Government Partnership (OGP), at which most South East Asian nations will be represented by very senior officials.

This was an official invitation to Abbott from SBY himself, who was said to be offering an olive branch.

As the ABC reported:

'If the trip to Bali had gone ahead, it would have marked a significant thawing in diplomatic relations which had been strained by Australia's asylum seeker policies, and by last year's revelations that Australia had tried to spy on the mobile phones of Mr Yudhoyono, his wife and other officials.'

Fast forward to last weekend, when the Indonesians discovered Immigration Minister Scott Morrison had ordered an asylum seeker boat heading for Christmas Island be intercepted and towed back to Indonesian waters.

Peter Hartcher described the situation this morning in an SMH article entitled 'Why Tony Abbott's tactics have caused a big chill with Indonesia':

He wanted to go. With only six months remaining of Susilo Bambang Yudhoyono’s decade in power, there are limited opportunities to restore normal relations while Indonesia is still led by the most pro-Australian president it has ever had.

But Abbott’s not there. He pulled out of the trip late on Friday. News had broken that the Australian authorities had intercepted a boat carrying asylum seekers. They were turning it around to send it back to Indonesia.

On ABC AM yesterday, the Opposition’s spokesperson on foreign affairs, Tanya Plibersek, who is also deputy Opposition leader, said Abbott’s excuse for not attending the Open Government Partnership meeting in Bali was “lame”.

“It’s not credible to suggest he needs to be here for Budget preparation.

“The Budget would normally be at the printers right now unless there is much more chaos than would be expected right now."

Ms Plibersek claimed Canberra’s relationship with Jakarta was “totally off track” and called on Mr Abbott to restore it to where it was under Labor.

“We want it back to normal,” she told interviewer Chris Uhlmann.

"She is living in cloud cuckoo land if she really believes that and indeed if she does then Abbott should remove her from the important ministry. Her spin does impress nobody, particularly the Indonesians."

We were told that Scott Morrison’s overbearing and offensive attitude to the towing back of boats to Indonesian waters is particularly resented and he has been told of this in no uncertain terms — and not only by DFAT officials.

Defence Department sources claim that while ever Morrison is in the official picture, normal relations are unlikely to be resumed.

Ms Plibersek also criticised Scott Morrison, saying he was wrong not to follow Labor’s suggestion that asylum seekers in Malaysia would be able to work, receive medical treatment and have their children attend schools.

"All he wants now is to send them to Cambodia,” she said.

And we understand a rift has developed between the two most important departments – DFAT and Defence – with the Prime Minister’s office.

The claim that unilateral and unsustainable decisions are being taken, making any form of reparation of the ever worsening situation almost impossible.

When asked to comment on a recent report in the national broadsheet that the Indonesian ambassador to Australia, recalled by Jakarta last year over the spying scandal, might have returned to his Canberra Embassy post — we were told in no uncertain terms this was simply untrue.

Our sources reveal the ambassador returned to Canberra recently for a two day visit while he sought medical attention and then returned to Indonesia.

We are told there is “more water has to run under the bridge” before the Embassy of Indonesia in Canberra is returned to its normal ambassadorial status.

The current diplomatic imbroglio is one of Tony Abbott’s own making, like many problems currently facing his Government. 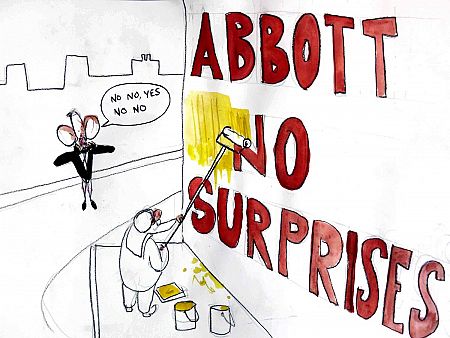