If you are a Gold Coast resident and are considering voting for Tom Tate – regarded by this publication as one of the most dishonest and disreputable politicians in Australia – then perhaps read through the following list of Tate’s lies and failures first.

The following list of Tate’s misdeeds is long and should, at least, make you pause for thought.

1. In 2005, Tate assisted his business partner and friend, the infamous alleged fraudster and bankrupt Francis Kovacevic (AKA The Man with Four Names) in relieving unwitting elderly art collector Fernando Da Costa of his valuable paintings, including a priceless Picasso, via fake “forestry bonds”. Da Costa later discovered the paper was worthless. He and his wife are now penniless. Kovacevic traded the fraudulent bonds to da Costa for $3 million, while Tate walked away with an Andy Warhol painting. Nice!

2. In 2005, told Surfers Paradise Bowls Club members he would save their ailing club if they entered into an arrangement with him and his partner, Kelvin Gersbach, to manage it. Did nothing and ran the club into the ground, then picked it up, as per the unscrupulous agreement, for the cost of the club’s debts: about $770,000. Before Tate "Crackerjack"-ed the club, property developer Sunland had offered to purchase it for almost ten times the amount ($7.5 million) Tate ultimately paid. The club was closed and members shut out. A company, City Pacific, put in a bid to the Council in 2008 for a 70-100 tower casino on Tate's land. Tate admitted being in talks with City Pacific, but denied being part of the bid.

3. In his first tilt for mayor, in 2008, running openly under the Liberal Party banner, Tate claimed his team was more about "being transparent than about being Liberal". Then refused to reveal the Party’s election campaign donors.

4. Sold without permission a property he jointly owned with former Albury Mayor Amanda Duncan-Strelec, and then lied in court about their partnership in court, eventually forcing her into bankruptcy (2008-2010).

5. “Read my lips, no!”  leered Tom Tate before the 2012 Mayoral Election, when asked if he would sell the Bruce Bishop Carpark. After being elected, he revealed he planned to sell a range of public assets, including this iconic Surfers Paradise park, to fund his pet project: the Gold Coast Arts Centre (HOTA) and cultural precinct.

6. In the 2012 mayoral campaign, then unelected candidate Tate lied about providing free parking for Gold Coast motorists on weekends and public holidays. In fact, after the election, Tate quickly raised parking prices. And then he did exactly the same thing in 2016. 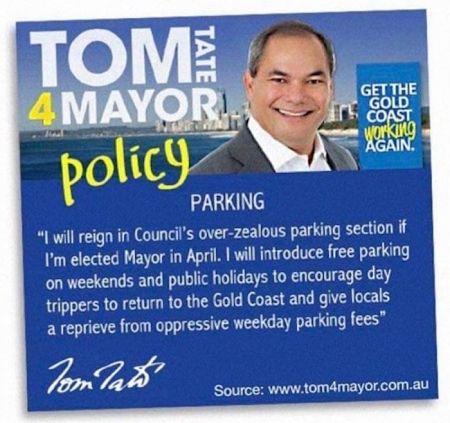 7. Claimed to be a “true independent” before the 2012 Election, despite openly running for mayoralty as a Liberal before the 2008 Election. Then, after being voted in as mayor, revealed himself to be an LNP life member.

8. Before the 2012 Mayoral Election, Tate vowed to divest himself of his shares in a company called Crestden, which he used to sweep away the Surfers Paradise Bowls Club from its members for less than a song [see #2]. But in a debate prior to the 2016 Election, Tate said he was only a minor shareholder (he owns a third of the shares) and so would not sell. More cynical deception.

9. In a 2012 TV interview, Tate promised (see video below) that he would not be proceeding with his controversial Cruise Ship Terminal plan for the Spit because it would not be “cost-prohibitive”. Then in a mayoral debate in 2016, denied ever saying it would not be viable.

10 to 18. The Gold Coast Bulletin reported that Tate failed to deliver on over one-third of his 2012 Election campaign promises. These included lower rates; building a new road; a salary freeze on bureaucrats; off-peak public transport for seniors; free transport for veterans; that he would lobby the State Government to prevent the privatisation of water assets; and putting a moratorium on Stage Two of the Light Rail.

Fibs after the 2012 Election

19. Announced, in 2012, that the Council would collect “open space preservation” and “koala” levies to preserve both. But not one cent of these targeted levies has even been used to purchase even a square inch of land for conservation purposes or to protect any iconic fauna. Instead, the millions raised have been simply absorbed into the Council’s consolidated revenue. In fact Tate, has sold off a great many council blocks and koalas are an even more endangered species on the Gold Coast than ever before.

20. Lied at a 2016 mayoral debate about whether Black Swan Lake would be permanently preserved. Revealed after the election well-developed plans to gift it to the Gold Coast Turf Club, of which he was patron, to build a car park. Then ignored a petition signed by 40,000 outraged residents. This once idyllic preserve for native birds and fauna has now been largely destroyed.

21. Claimed before the 2016 Election that the Green Bridge and HOTA were already fully funded. Then, after the election, sold the Bruce Bishop Carpark to fund these vanity projects.

22. Before the 2016 Election, solemnly promised to install replacement artwork between Surfer’s Paradise Boulevard and Elkhorn Avenue, following the uproar over the installation of a massive New Zealand fern statue. The new artwork, though, was never commissioned, let alone installed.

23.Told voters before the 2016 Election that the proposed Cruise Ship Terminal at Phillip Park on the Spit would “not cost ratepayers a cent”. Subsequent estimates show the project would cost Gold Coast residents up to $12 million.

24. Deceived the public prior to the 2016 Mayoral Election about ASF China’s involvement in a number of Gold Coast developments. Also did not disclose important information regarding a number of allegedly unlawful activities perpetrated by ASF in completing these projects.

25. Mayor Thomas Tate repeatedly told journalists and the public prior that his wife Ruth was running his 2016 Election campaign. An investigation by the Crime and Corruption Commission's Operation Belcarra revealed his campaign had been, in fact, organised by the LNP’s favourite Surfers Paradise spin machine, the now-bankrupt Shac Communications.

26 to 31. Failed to deliver on many election promises after being re-elected in 2016, including keeping rates low by limiting increases to CPI or below, then introducing new levies; introducing left turns at red lights; introducing real-time flood modelling for disaster management with real-time data (for 2017 and 2019 floods, data was not available in real-time); synchronising traffic lights; smarter libraries and community spaces, including 3D printers and tech for impaired residents; and smart water meters for all residents to allow automatic reporting of leaks.

32. When asked by ABC's Four Corners in 2017 who paid for his 2016 trip to China, Tate said it was “private”. In that trip, he met with Asian developers, including speaking at a Forise Holdings event. Tate subsequently voted to approve an 88-storey tower in Surfers Paradise without declaring any conflict of interest, perceived or otherwise. Tate amended his register of interests in December 2017 to declare the trip was wholly paid for by his long-term legal counsel Hickey Lawyers. Hickey’s principal, Tony Hickey, a personal friend and business associate of Tate, was the spokesperson for Forise in Australia. Tate was photographed at a meeting with Tony Hickey in Surfers Paradise a mere 24 hours before voting to approve the project.

33. Tells the local Murdoch rag, in 2017, there is a “huge level of support for a ship terminal", based on the Gold Coast Bulletin’s so-called “ultimate” survey of just 1,865 residents (about 0.1% of the Gold Coast population). However, in 2006, 38,000 people petitioned State Parliament to oppose any ship terminal on The Spit or Broadwater.

34. In 2017, ABC Four Corners uncovered an unredacted official Gold Coast Council report on the Cruise Ship Terminal, which stated that the proposal was extremely unsafe, potentially environmentally destructive and financially unviable. Tate had released this report earlier, but had blacked out all the offending bits.

35. Boasted that the 2018 Commonwealth Games would create income for the Gold Coast, despite academics predicting it would cause a steep business downturn. The experts were proven to be correct, as trade went into the doldrums city-wide during the Coast’s lacklustre Games.

36. Claimed the removal of sand dunes from Coolangatta Beach in 2018 was for the Commonwealth Games. Organisers utterly refuted these claims. Tate had simply lied. Again.

37. Was found in 2018 to have breached electoral laws at 2016 Mayoral Election by CCC Operation Belcarra. The CCC declined to prosecute.

38. At the end of 2018, Tate bafflingly asserted there were “no black swans” in Black Swan Lake, despite the colony being filmed and photographed for decades. Just another shameless, bald-faced lie.

39. In December 2018, Tate was found to have committed misconduct over a social media post in which he falsely accused fellow councillor Glenn Tozer of “rorting”. Tate was fined $1,250 and ordered to undergo counselling.

40. Gave, in 2019, Sunland CEO Soheil Abedian the keys to the City for his “charitable work”, despite there being no evidence this fat cat had done anything charitable at any time. Most suspected it was probably more to do with Sunland wanting to build on the Spit.

41. Claimed the reason he was dropping a defamation case against fellow Councillor Peter Young in 2019 was that he didn’t want ratepayers covering Young’s defence. Except Young was paying his own legal fees, except for a small amount that had been paid for through the Council’s insurance policy. The Council was not a cent out of pocket. Tate had lied.

42. Lied to the press in 2019 about his decades-long friendship and business partnership with prolific alleged fraudster Frankie “Four Names” Kovacevic.

43. In 2019, claimed he opposed developing on the Tallebudgera and Carrara flood plains, only to support several proposals by foreign investors in 2019.

46. In February 2020, like a dollar store Aussie Donald Trump, Tate said the increasingly unsafe water conditions on the Gold Coast were just “fake news!” In fact, tourists had been exposed to dangerous levels of E.coli and 25 homes had to be stripped down due to dangerous contamination, after 91 sewage pump stations failed. The Gold Coast’s greatest embarrassment was simply spinning more shit.

47. In 2020, is found by the CCC’s Operation Yabber to have allegedly committed several offences, including purchasing personal items with Council money, using his official powers to protect his chief of staff from disciplinary action and donating several thousand dollars of Council money to charity without approval. The CCC again refuses to prosecute, although it referred Tate to the Office of the Independent Assessor for disciplinary action and is still investigating the improper use of his powers complaint. Tate then mocked the report in a press conference, calling it “Yabber dabber doo!” and claimed to have been fully exonerated.

48. In March this year, after the coronavirus outbreak, Tate smeared his mayoral opponent Mona Hecke by calling her an “anti-vaxxer”. Turns out, she ain’t!

49. Also in March 2020, despite the Council being in caretaker mode, Tate has made several major project announcements, including the multi-million dollar Greenheart project.

50. This month, with great fanfare, Tate set up a so-called “COVID-19 Taskforce”. But it turned out to be about money, not protecting the public, as it included no medical professionals. Instead, it was strongly stacked with Tate’s tourism and big business cronies.

So there you have it. A long but by no means exhaustive summary of Tom Tate’s dreadful disregard for the truth. He simply cannot be trusted. He is in politics to feather his own nest and those of his rich cronies.

If you are voting on the Gold Coast today, stay safe. And help make the Gold Coast a better place by not voting for Tom Tate — a man this publication thinks is lucky to still be at large, let alone Mayor of Australia’s sixth-largest city.