Gold Coast developer mayor Tom Tate has brazenly lied about his longstanding business relationship with alleged fraudster Frank Kovacevic — and the local News Corp scandal sheet has let him get away with it.

News recently emerged that Kovacevic has been attempting to offload the Picasso sketch he, with the assistance of the colourful mayor, allegedly cheated from prominent Flamenco guitarist Fernando da Costa several years ago.

And while the Gold Coast Bulletin reported some of the details of this scam, this News Corp publication allowed Tate to claim in its pages this month, unchallenged, that Kovacevic had never  been his "business associate".

IA HAS REPORTED THE TRUTH — AS DID THE GCB, ONCE!

As Independent Australia readers would be well aware from our meticulous investigations into the colourful exploits of Tom Tate and “Frankie Four-names” Kovacevic, this is an outright, brazen, lie.

Tate’s decades long business relationship with Kovacevic is documented comprehensively in IA, but it has also been affirmed under oath by numerous parties, including Tate and Kovacevic, both inside and outside court.

Not only that, this business relationship between the mayor and the notorious alleged scammer has been thoroughly reported in the very pages of the Gold Coast Bulletin over the course of two decades — even described by the paper as a business partnership. It is close to unimaginable the paper could allow this falsehood to go unchallenged without a clear intention to mislead the public. 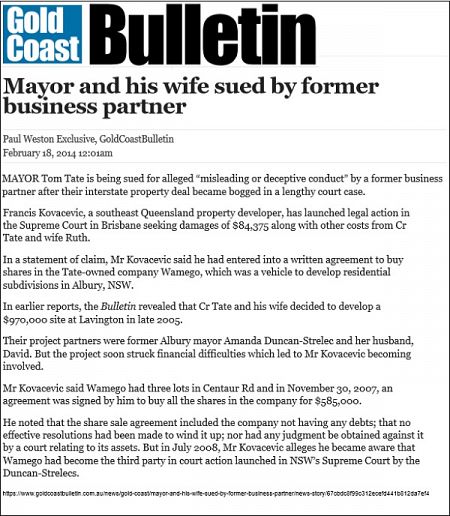 Many have accused the Bulletin of being partisan towards the LNP and of whitewashing some of the numerous alleged misdeeds of the Mayor and his controversial Council. Tate is, of course, a lifetime member of the LNP.

The Queensland anti-corruption Commission, the CCC, is currently investigating Tate over multiple alleged improper dealings with developers and other claims of corruption. Some sources suggest the Council may soon be sacked by the Labor State Government. 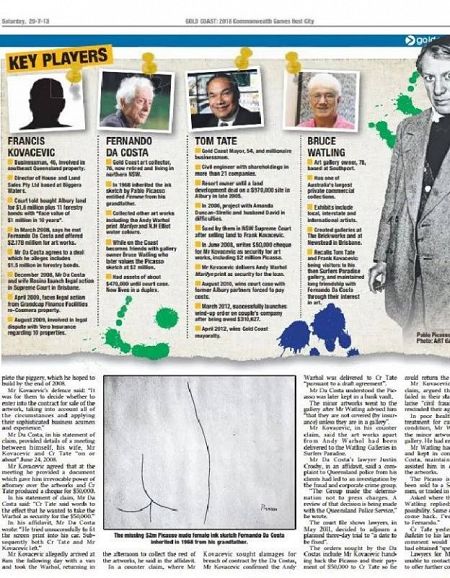 THE RETURN OF PICASSO

The purloined Picasso, taken by Kovacevic and Tate from da Costa in 2006, flared back into the news last month. On 28 December, the Gold Coast Bulletin reported Tate calling for art donations to HOTA — the new Gold Coast City arts precinct.

“There are some Picassos in Australia already, which are worth millions and it would be great to have those,” the Gold Coast Bulletin reported Tom Tate as saying.

“We are also appealing to major galleries to see what pieces they are not currently displaying,” continued Tate. “Some Andy Warhol would be amazing.”

Social media lit up after the story was published, with many noting that Tate and Kovacevic worked together to secure both a Picasso and a Warhol piece from da Costa for a mere $50,000. Some thought Tate was taking a sly dig at Kovacevic, with whom he had a major falling out in 2012, after they had worked together to secure land in NSW from former Albury Mayor Amanda Duncan-Strelec. 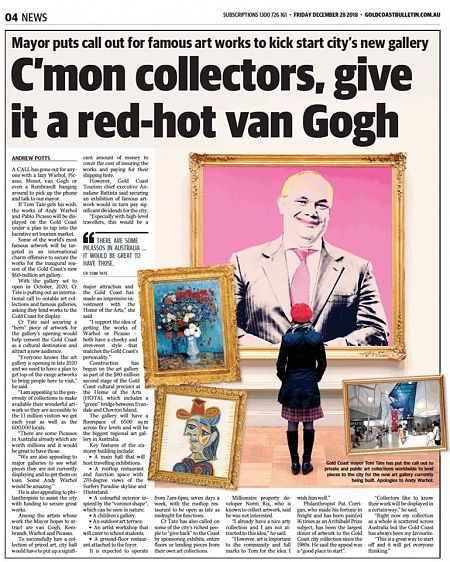 You can read more about the long partnership between Kovacevic and Tate on Independent Australia HERE and HERE.

TATE TRIES TO COVER HIS TRACKS

On 10 January, the Gold Coast Bulletin reported Tate trying to cover his tracks, saying his personal preference would be donations of Australian artists, despite not mentioning a single one in the original article.

The Gold Coast Bulletin reported soon after that a Canadian registered domain was attempting to sell the same Picasso ink on paper artwork for an astonishing $57 million, with the name of the domain owner concealed.

Of course, the owner is almost certainly Francis Kovacevic. 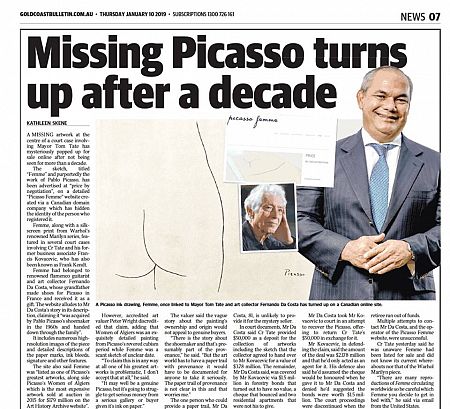 Late last year, Kovacevic, using his alias Frank Kendt, had made moves to sell the sketch, La Femme, even engaging a Canberra web designer, Evan Connell, to create a website for the picture. (That webpage may be viewed HERE.)

'Frank came to me a few months ago and asked me to sell his Picasso for him. He was looking for overseas buyers, and looking into selling it on bitcoin. I found his character very suspicious, so I gave him his deposit back and pulled out of the deal.'

The Canadian registered website shows similar details to those created by Connell.

In the same article, the Gold Coast Bulletin reported Tate as 'saying [Kovacevic] had never been his “business associate”’  — something the paper plainly knew was false. 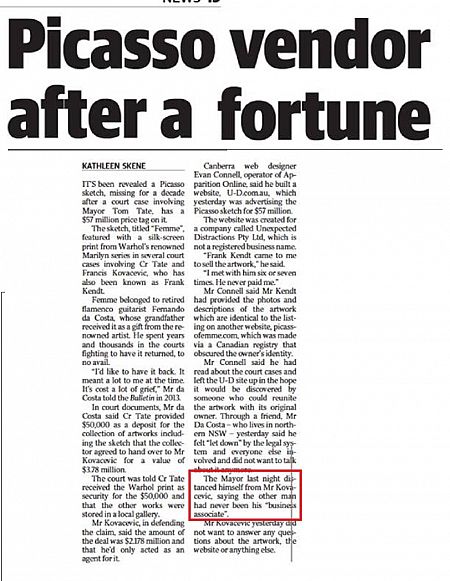 The only alternative is that Tate had perjured himself, which he had not done — at least not in this case…

This editorial was originally published as part of the Independent Australia weekly newsletter. These editorials are usually only available to subscribers and may be read online in the IA members only area. 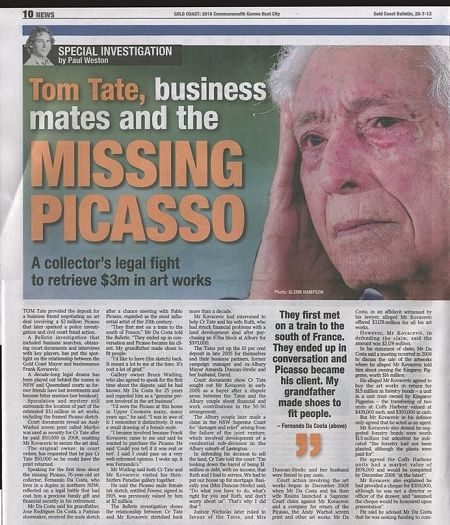