Queensland koalas have been translocated under the guise of "scientific purposes" without any evidence of resultant scientific studies. Sue Arnold reports.

THERE ARE OMINOUS signs that the Queensland Government may soon adopt translocation of any koala colony as policy to ensure developers are not hampered by any necessity to protect habitat.

The Queensland Government’s approval of a major translocation of koalas from Coomera to distant conservation areas is regarded as the largest translocation project undertaken in Queensland and New South Wales.

As the purpose of the project was to facilitate the development of the Coomera Town Centre located in 900 hectares of prime koala habitat, the translocation contradicted any suggestion that “scientific purposes” was the raison d’etre.

Nevertheless, scientific permits were issued by the Government to allow the project to proceed.

As virtually all relevant documents giving approval to the translocation are unavailable on the public record, Right to Information (RTI) requests are the only way to dig into the closet of this “transparent” Government.

There's serious concerns for Coomera's koalas, with the growing number of new developments in the area. https://t.co/hPHylpjJZM @Carly_Madsen #7News pic.twitter.com/Do3EoCkFPI

Between 2008 and 2014, permits to allow 260 wild koalas from the Coomera population of approximately 500 healthy animals — to be captured and translocated to areas around 35 km from their home range as ‘Research on non-protected areas for scientific purposes' under the provisions of the Nature Conservation (Administration) Regulation 2006 were issued.

However, the permits failed to specify the reason for the translocation was to facilitate the development. Instead, the permits allowed a battery of physical trauma and testing regimes, including sedation, general anaesthetic, bone marrow sample, urine extracted through the abdomen and more. This was followed by an hour-long trip to an enclosure in the conservation area, some days later to be released into an unknown environment.

Not only were Coomera koalas exposed to this trauma, but a number of koalas in the two translocation areas were also subjected to the same “scientific purposes” examinations.

A provision of the permits states:

'Collecting activities are to be effected away from public view.'

As any worthwhile koala ecologist would agree, a translocation of this size is of significant interest to the scientific community.

The permit acknowledges that a

'... report on all work undertaken in relation to this permit and any resulting publication is to be provided to the Environment Protection Agency.'

There’s no peer-reviewed or un-reviewed paper on the project and its outcomes. Animal Ethics Committee Approvals were required to legitimise this project. This information is only available under RTI. No Wildlife Data and Return Records required by the Scientific Permits are available without RTI requests.

A request for surveys of these animals from 2014, when the translocations ended, to 2018 was met with the usual denial:

'The information that you are seeking is not ordinarily in the public domain and therefore I cannot supply it to you. It is suggested that you lodge a Right to Information application which can be accessed through Council’s website: http://www.goldcoast.qld.gov.au/council/right-to-information-477.html.'

What we do know is that 23 koalas were killed by dogs in the early translocations.

A total of 23 koalas were predated by wild dogs following relocation, with over half of these occurring during a four-month period in the early stages of the program from October 2010 to January 2011. 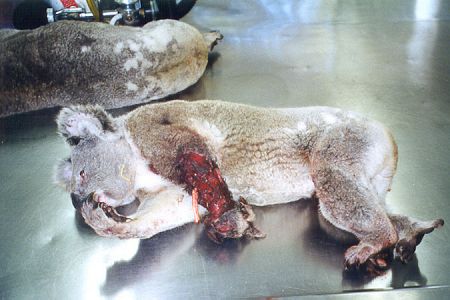 But there’s no information regarding further mortality, or sex, age classes, number of joeys, the timing of translocations and numbers released, any control site or relevant data on koalas resident in the conservation areas.

Given that the permits are styled as “ for scientific purposes”, it’s necessary to consult the primary authority on translocations of species, the International Union for the Conservation of Nature (IUCN) Guidelines.

According to the IUCN [IA comments in bold]:

The Guidelines are a response to the multiple challenges facing species, and the resultant need to use conservation translocations to establish new populations; where the species used to occur; or to boost existing small populations; or to restore key ecological functions.

Conservation translocation is the deliberate movement of organisms from one site for release in another. It must be intended to yield a measurable conservation benefit at the levels of a population, species or ecosystem, and not only provide benefit to translocated individuals.

Any conservation translocation must be justified, with the development of clear objectives, identification and assessment of risks, and with measures of performance.

Is the primary function objective of the release to:

Under the heading of 'IUCN Guidelines, Population Restoration', a further concern over translocation is covered:

'Addition of individuals to an existing population of conspecifics e.g. to correct skewed sex ratios, improve genetic status. This type of action is always risky as it poses a high risk to existing wild population from factors such as disease introduction & genetic pollution by introducing individuals which may be of the wrong race and/or subspecies.'

A paper by Fischer & Lindenmayer (2000) focused on translocation, these well-respected scientists concluded that:

'... the success rate of translocations, in general, is poor and is particularly low in Australia across all taxonomic groups. Translocations undertaken to resolve human-animal conflict were largely unsuccessful due to a number of factors including predation, post-translocation mortality and homing behaviour.'

Save the Coomera Koalas - Sign the Petition! https://t.co/YaQ6x960aW via @Change

The 'Nature Conservation (Koala) Conservation Plan 2006 and Management Program 2006-2016' states that koala translocation should be restricted to exceptional circumstances and operate under strict scientific guidelines.

When there is the conflict between the habitat requirements of wildlife and human requirements for land use, there can be pressure to "move the wildlife". Translocation, or the relocating of animals out of areas to be developed and into other habitat, can be perceived as a viable option. Unfortunately, this wrongly assumes that there is suitable habitat available, the translocated wildlife will survive and the habitat has the capacity to support additional wildlife including koalas.

The translocation of koalas will not be approved in Queensland except under a controlled scientific research approval aimed at expanding knowledge about wildlife translocation.

That sentence needs to read as, approval aimed at expanding knowledge about wildlife translocation for the purpose of conservation, not development.

'People are really angry ... only foolish politicians will ignore public concern for koalas.'

Koalas have also been translocated from other development sites at Coomera with the approval of the Gold Coast City Council as part of the “Koala Translocation Project”. It would appear that Council is attempting to set a precedent (backed by the Palaszczuk Government) to introduce translocation of koalas as government policy.

So the cart is now well and truly before the horse. The evidence points to a disastrous shift allowing the translocation of koalas that interfere with development.

Interpreting the meaning of “scientific purposes” is open to the widest possible definition allowing translocation projects to proceed in the name of science.

The ramifications of the Coomera extractions are serious. As koalas are removed from development sites, the necessity for developers to refer increasingly small areas of habitat with low numbers of koalas as "matters of national environmental significance" (MNES) under the Environmental Protection & Biodiversity Conservation Act (EPBC), diminish and disappear. The likelihood of a development being declared a controlled action with various environmental requirements and safeguards will no longer be necessary.

The steps you can take to save koalas from extinction (Pic: Friends of the Koala) https://t.co/mEHMtR4rfh pic.twitter.com/U3jzfpZ3AM

A perfect recipe to allow the absolute degradation of the habitat of a nationally significant koala population — one of the few remaining in south-east Queensland. Developers can chip away at habitat, leaving koalas with a war zone.

At the same time, considerable efforts and funds are being allocated to veterinarians and wildlife hospitals focused on finding cures for and treating chlamydia, retrovirus and other diseases. This focus allows the foundational cause of koala diseases, loss of habitat, to be swept aside.

The treatment of the koala should be an injunction for the states to bring in legislation for the prevention of cruelty to wildlife. At the international level, a court dealing with crimes against nature is long overdue.

It’s still not too late for nearby habitat to be acquired that would give koalas a chance at survival. The Palaszczuk Government needs to step up and provide the funds to buy the land for habitat to be protected in perpetuity. Otherwise, the recently released 'Koala Conservation Response — a new direction for the conservation of koalas in Queensland', isn’t worth the paper its written on.

Yet another political betrayal.