Young refugees are bringing hope to Gaza through sport

DESPITE YEARS of violent resistance against the Israeli occupation on the Gaza Strip and the West Bank after the failure of the so called "Oslo peace process" in 2000, talented young Gaza born refugees still enjoy sports to heal their psychological and social problems.

They practice football and athletics to challenge the destruction, poverty, violence and absence of security.

Their parents hoped that the Palestinian elections, which took place in 2006, would contribute to peace and security. However, Gaza witnessed various Israeli military operations during this period that destroyed already impoverished infrastructure.

In 2014, the Operation Protective Edge was the sixth Israeli military offensive and raised the number of children killed in assaults on Gaza to 1,097 since 2006, according to Defense for Children International (Palestine).

However, a number of girls and boys have exercised and delivered resilient and inspiring stories of success despite the lack of safety for so many years. They do not only attempt to overcome their psychological and social problems by playing but also explore opportunities to participate at international tournaments to exchange their cultural and social contexts. They challenge the social and cultural norms by their own participation and practices.

Inas Nofal, a 16 year old girl from Maghazi refugee camp has lived all her life under these circumstances of violence and occupation. She resists the social norms and local culture which discourages girls from sporting activity, to run in the streets of Gaza. She insists on being an athlete and recently won a number of local races in preparation for international tournaments in The Netherlands, the Arab Emirates and Lebanon.

However, Inas could not travel to participate at international tournaments in the region because of the restrictions and blockades imposed on the Gaza Strip since 2005. She turns up at a daily training session under supervision of a national coach, certified by International Association of Athletics Federations (IAAF), Sami Nateel al-Balad.

Though Sami had been hesitant to coach Inas, because it is so unusual for a girl to run in the streets of Gaza, Inas' father managed to persuade him. For a Gazan native to assist his daughter to practice running in the streets of the district also defies long held stereotypes.

There are a number of grassroots women organisations serving refugees that offer spaces to attend seminars, training courses and social orientation but not sport facilities. One example is that the United Nations Relief and Works Agency (UNRWA), established 11 women’s grassroots centres operating in refugee camps in the Gaza Strip after the Palestinian catastrophe and the establishment of Israel in 1948.

These organisations deliver cultural, social and sporting activities, education, recreation and other services for women.

Shinaz Mislh, the director of the Maghazi Women's Centre said:

"These centres represent a very peaceful environment for women, where there are no other places in the refugee camps to visit and engage with. They feel secure in a friendly environment where they can express themselves and practice their own community activities freely without any restrictions as director of women activity centre."

However, Inas breaks the norm as the first female athlete from Gaza aiming to participate at international tournaments.

From refugee camps to European tournaments

Boys have been participating in football tournaments in Oslo since 2010 (except for 2014 due to the summer hostilities). Boys under 13 representing the refugee camps of Gaza enjoy intensive training sessions from November to July before departing to Norway each year under the supervision of national coach, Mr Jamal. He and his colleague, Abed Karim also raise funds from local private businesses to cover the expenses of his team. 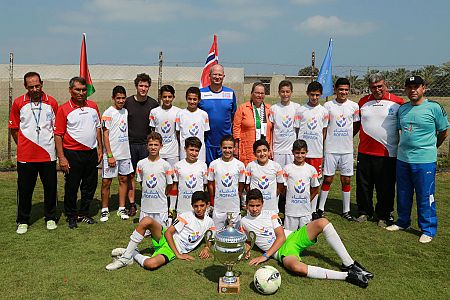 Head of the Representative Office of Norway to the Palestinian Authority, His Excellency Hans Jacob Frydenlund (centre) poses for a photo with the winning youth football team after a friendly game at Al-Musader playground in Gaza (Photo by Rushdi Al Saraj via UNRWA.)

Mr Jamal always emphasises that his mission is not only playing football but also cultural exchange. This year, they also succeeded in participating in the Gothia Cup in Sweden and Dana Cup in Denmark.

UNRWA Gaza refugee football team won the world’s largest football tournament for youth, the Norway Cup at Oslo. They enjoyed unforgettable four weeks out of Gaza and hte opportunity for fair play and meeting people from various cultural and social backgrounds. They are otherwise unable to travel across the Mediterranean.

The fathers of team members Abdedallah Jaber and Mohammed Matar are pleased to see their son's sporting, social and cultural abilities improve since they returned to Gaza from international tournaments. Abdedallah father said his son has more friends and his interest to learn English has increased to develop his skills of communications and travel abroad. Mohammed Matar's father was also surprised that his son is now much more confident, and his social attitude and behaviour is different.

Participation of boys from refugees camps at international tournaments and girls' resilience to break the norm of violence, poverty and inhumane conditions gives hope that Gaza can be recovered from under the rubble if it is given a chance.

Meet Inas Nofal, #Gaza's only competitive female runner. She dreams of competing at the 2020 #Olympics.https://t.co/BXG30QWyss