Yellow Jersey battle goes up hill and down dale

The Tour de France is heading into the Alps, although without some of its pre-race favourites, writes Lachlan Barker.

Having been hauled minorly over the coals by the editor for getting off-topic in my last le Tour article, distracted as I was by the marvellous commentary, I’m setting out to write hard-nosed sport in this one.

However, I would just like to make a note of some apposite naming that caught my eye during the week.

When we left things, the race was streaming through the Vosges Mountains in eastern France, with Astana’s Vincenzo Nibali in the Yellow, leader’s, Jersey.

But then on the eve of Bastille Day (Le quatorze juillet– the fourteenth of July, as the French themselves refer to it), a Frenchman, Tony Gallopin, of Lotto-Belisol, moved up to take the golden fleece.

World time trial champion, Germany’s Tony Martin, of Omega Pharma-Quick-Step won the day’s stage with a staggering display of horse power, while Gallopin moved through the field behind Martin to pick up enough time on Nibali to claim the top spot.

The cheers of the parochial French crowd when he crossed the line were something to be heard. To have a local in yellow on the country’s major holiday is greatly desired and was volubly celebrated.

On this stage a large group broke away from the peloton, Gallopin among them, and set off in search of victory.

Among the riders in this group was another Frenchman, Pierre Rolland of Team Europcar. So while Tony was “gallopin’”, Pierre was "rollin'". I’ve since seen that SBS’s Cycling Central has beaten me to the “gallopin’” punch, but I did get the “Rolland was rollin’” in first, so that’s something.

Then came stage ten and here another major shake-up occurred.

Alberto Contador, of Tinkoff-Saxo crashed out of the race. Contador and Christopher Froome of Team Sky were pre-race favourites for this year’s Tour de France.

Froome was last year’s winner, but suffered three crashes in five days, and had to retire on stage five.

This then threw favouritism onto Nibali and Contador.

But then on a narrow road midway through stage ten, Contador went down. 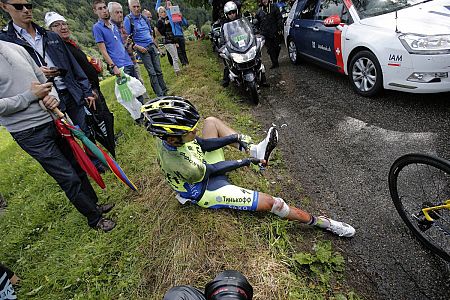 Alberto Contador crashes out of the Tour with a fractured tibia (Image via businessinsider.com)

Exactly what happened is still not clear. Contador at the time wasn’t sure if he had hit a rock or a pothole. His support crew thought he may have been eating, and thus not concentrating fully on the roadway. The final readout seems to indicate a combination of the two.

Whatever it was, it was a bad accident, leaving Contador with a fractured tibia, and no alternative but to retire from the race.

So the race was once more in flux, with new contenders now emerging to compete with Nibali.

Nibali won the stage this day, and retook the prized yellow shirt from Gallopin.

There then came a rest day, and racing began again on July 16 with Stage 11.

Tony Gallopin won this stage, though Nibali retained the Yellow Jersey, as Gallopin’s victory did not gain him sufficient time.

But while Gallopin was heading for victory, at the other end of the race, another favourite was stuttering badly.

Andrew Talansky is the number one rider for US team, Garmin-Sharp. He has, like Froome, gone down in a number of crashes already this tour and these have taken a heavy toll. He had an extremely sore back, and at one point on this stage pulled over to the side of the road and got off his bike.

All the indicators were that he couldn’t continue, but his team boss, South Africa’s Robbie Hunter, spoke with him at length, and eventually was able to help Talanksy back onto the bike. Talanksy then rode through nerve-shattering pain for the rest of the stage, and made it home just minutes before being officially excluded from the race.

Each rider on the day’s stage must cross the line within a certain time of the stage winner. There is a complex mathematical formula to determine this, but 45 minutes is a rough guide. So if the stage winner crosses the line after four hours, then all riders have to be home within four hours and 45 minutes. The actual time is a percentage to do with the speed of the day’s stage, and the winner’s time.

This day was a relatively fast stage, with the stage winner Gallopin crossing the line in 04:25:45. Talansky limped home in 04:57:50, 32 minutes later and beat the cut off for the day by around five minutes.

It was a massively brave effort by Talansky.

Talansky was another pre-race favourite – he'd won the Critérium du Dauphiné, a major pre-Tour indicator of form – but couldn’t start the next day’s stage and has now officially abandoned.

The next stage, the twelfth, was won by Norway’s Alexander Kristoff of team Katusha, with Slovakia’s Peter Sagan of Cannondale second and Frenchman Arnaud Démare of Française des Jeux (FDJ) third.

So with the Vosges Mountains behind, the Tour headed for even bigger mountains — The Alps.

The Alps include the highest point of this year’s Tour, the Col d'Izoard at 2,360m above sea level.

Nibali said he was “not afraid” of the Alps and the monster climbs therein, and this proved no idle boast, with the Italian champ winning the first alpine – the Tour’s 13th – stage.

Stage 14 – containing the above mentioned Col d'Izoard – saw the continued rise (excuse the pun) of Majka.

He won the stage, with Nibali (who retained the Yellow Jersey) second and Jean Christophe Péraud of AG2R third.

So, the riders move on through The Alps with their regular multi-kilometre climbs taxing the teams.

However, commentator Phil Liggett informed us last night that beyond The Alps lie The Pyrenees, which he described as “brutal this year”, indicating they may be harder than The Alps.

That doesn’t bear thinking about.

I’m already wincing and panting in sympathy with the riders at the moment; if The Pyrenees are harder again, I’m gonna need oxygen just to watch.

King of the Mountains (Polka-dotted Jersey)

All tables in this piece via sbs.com.au/cyclingcentral. Read more by Lachlan Barker at cyclonecharlie88.blogspot.com.au and follow him on Twitter@cyclonecharlie8.