World Cup Brazil has now moved to the sudden-death phase, where the nerve of player and spectator alike will be tested with the dreaded penalty shootout coming into play.

However, before getting to who’s in and who’s out, I’d like to pay tribute to the quality of the commentary.

With soccer, we are blessed with the best commentators – mostly English nationals, for the English-speaking TV channels – and the best of these, in my opinion, is Martin Tyler. He stands head and shoulders above them all and is the David Attenborough of the soccer comment. Even, in my opinion, having a similar physical resemblance.

Martin is genuinely knowledgeable – encyclopaedically so, in fact – and brings this wealth of knowledge to his calls, with a precise level of enthusiasm, that invariably exactly captures the level of excitement in the game being played.

If the match is a dour deadlocked struggle between the defences, he then takes the opportunity to bring out a series of esoteric facts that would stretch a pub football-trivia champ.

For instance, during the Italy England game in Manaus, Tyler informed us that this city is so far from Rio, that it is in a different time zone. What’s more, the stadium in Manaus, built for the World Cup, has an uncertain future afterward as Manaus does not have a top flight soccer team. So then Martin informed us that one of the possibilities for the stadium is that it may be converted to a prison.

Talk about depth of knowledge.

Martin is not just a journalist, he is also a coach — currently the first team coach at Isthmian League club Kingstonian.

He showed his coaching nous during the Germany-Ghana match. Germany were down 2-1 in the 63rd minute. Martin then suggested that it was time for the Germans to bring on their ace, but now ageing, goal scorer, Miroslav Klose.

This goal got Germany a satisfactory 2-2 draw.

And the final word from Martin has to do with Belgian striker, Vicenzo “Enzo” Scifo. A genius player, but not overburdened with thinking skills, Martin told us that it was said of Scifo, that

But if Martin Tyler is a gem who enhances our pleasure just by being able to listen to him, Uruguayan forward Luis Suarez is the closest thing to a nightmare soccer has got. A genuinely brilliant goal scorer, he nonetheless displays regular displays of mindless violence that beggar belief.

And the worst of it is: biting.

He was convicted of this crime twice — most famously while playing for Liverpool, where he copped a ten-week suspension.

One would think he would have learned, but clearly not, for during the match against Italy, he allegedly did it again, this time it was Italian defender Giorgio Chiellini who claimed he felt Suarez’s dental work against his skin.

FIFA have investigated, and Uruguay’s top lawyer was even flown to Rio to defend the striker, but to no avail. He has been suspended for nine games and four months from all soccer related activities.

Even if he appeals, he will not see another game in this world cup.

Needless to say social media went nuts over this alleged biting incident and was best summed up by this tweet from @bigjohnterry: 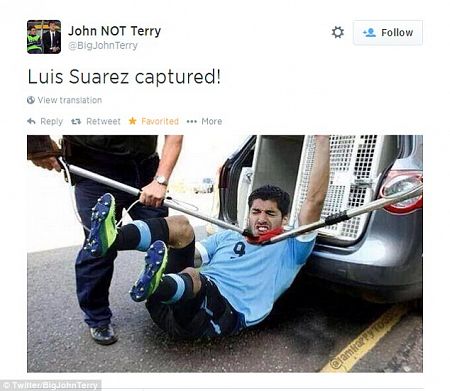 'FIFA finally get hold of Suarez.'

So to pass from one genius South American striker to another, but this time for all the right reasons.

It is generally considered the greatest player of the modern age is Lionel Messi of Argentina. He has performed miracles with his club, Barcelona, but has failed to live up to his promise for the national side.

However, as these SBS highlights show, he may have finally come of age.

His first goal fills every bit of the description “super-emphatic” and his second from a free kick is the epitome of precision, looking almost like it was laser-guided with the sort of equipment NASA used to drop the Mars rover on the surface of the red planet.

With the final matches complete the qualifiers for the knockout phase are:

Thus the breakdown for the remainder of the Round of 16 is:

Colombia played with assurance to down the Saurez-less Uruguay, 2-0.

They move through to play the anything but assured Brazil.

Brazil had their hands full with Chile, and only got away with it at the death through penalties.

Mexico and The Netherlands played a match that must have had heart surgeons on two continents standing fretfully by their phones waiting for a “call to attend”.

Mexico scored in the 48th minute (time added on in the first half) through Dos Santos. Then the match moved through the second half with the Mexicans in control, but then with those in Green and Red already celebrating the Dutch hit back in the 88th through Wes Sneijder.

The match back in the melting pot, those oh-so-hard-and-professional Dutchmen landed a killer blow. Star forward Arjen Robben was nailed in the box, the ref blew the foul and Huntelaar buried the spot kick, and the Mexicans, in injury time at the end of the game.

The Netherlands go through to play Costa Rica, who went through on penalties after a similarly heart-stopping match against Greece.

Argentina versus Switzerland promises much with the above mentioned Messi peaking and the Swiss ace, Shaqiri, fresh from a hat-trick against Honduras, firing at the other end.

The French should have too much all around for Nigeria to handle.

Germany will be too much for Algeria.

While Belgium v the USA will be tight, Belgium will go through thanks to more tournament experience.