Walk in her bowling spikes

The Walk in Her Shoes challenge is about to start, while the biggest challenge confronting Australia in the Cricket World Cup is beating those pesky Kiwis. Lachlan Barker reports.

We have decided to include women’s sport whenever possible in this column to counteract the MSM (mainstream media) largely ignoring it and, since cricket is the sport de jour, I went and checked if Australia’s women’s cricket team, the Southern Stars, were playing.

They don’t seem to be, but I found that Stars’ captain, Meg Lanning, has committed to the #walkinhershoes appeal, run by CARE Australia, so I thought it would be very worthwhile to mention that.

The Walk in Her Shoes campaign is a walk to get Australians to do a sponsored walk of similar distances to those walked by women and girls in the third world to get water. How far is this? Well, it can be a very long way.

The image following shows the challenges you can sign up for, with the top "Gold" challenge being to walk a gruelling 14 kilometres a day for five days: 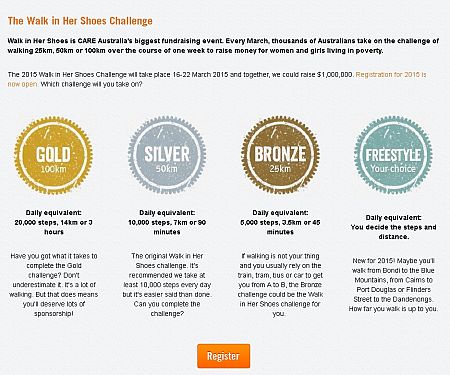 Hard yakka indeed, so think of those women who have no choice but to walk these distances every day just to keep their family alive.

Walkers are sponsored for kilometres covered and all monies raised go to help Care build wells and provide clean water for as many villages as they can in poorer regions of the world.

Now, as for male cricketers, the Cricket World Cup continues and the most notable game was the Australia v New Zealand match in Auckland at Eden Park.

In the end, New Zealand won a real nail biter by a single wicket, but that doesn't tell the full story of the day.

When not writing, I work as a gardener and, on the day of this game, I headed up to do some work for my client Joanne at Possum Creek, in the hills about ten kilometres west of my home town, Byron Bay.

I worked through the morning and then headed home about 1pm; as I drove down the hill, I turned on the car radio, to follow the game, and very soon heard Jim Maxwell, the doyenne of cricket commentators (in my opinion) said “and Haddin moves to 15 n.o.”

For you see, Brad Haddin bats at number eight for Australia and his presence at the wicket meant that six Australian wickets had already fallen; since it was only one o’clock, and even with the earlier time change from New Zealand where the match was being played, as I say, I knew things weren't looking good for Australia.

Then as the game trundled forward, the true nature of the trouble Australia were in became apparent. Australia had won the toss and batted, then things had proceeded well, until the second wicket fell at 80 and Shane Watson out for 23 — another concerning lack of runs for him.

This triggered a collapse, with seven wickets going down for a mere 27 runs, leaving Australia 9-106 in the 27th over.

The above mentioned Haddin then did what he could, in the company of number 11 Pat Cummins, and got Australia to a measly 151 all out. Haddin ended up with 43 while Trent Boult was the main destroyer for New Zealand with 5 for 27 from his allotted ten overs.

Clearly, New Zealand were going to win and so I nearly didn’t even follow the remainder of the match, thinking a bike ride or a surf would be a better use of my time on this sunny Saturday.

However, with commitment to this column – and knackered from gardening, I might add – I felt I better watch the carnage and so stayed in for the New Zealand innings — and I’m so glad I did.

The Kiwis took to the wicket and began batting like they all had an early plane to catch.

The openers Martin Guptill and captain Brendon McCullum took it to 40 in the fourth over, when Guptill fell, caught Pat Cummins, bowled Mitchell Starc for 11. However McCullum was in no mood to quibble and continued blasting Australia to all points of the compass until dismissed for 50 off 24 in the eighth over, fall of wicket 78, New Zealand already halfway there.

However, to the Australians' eternal credit, they never gave up and captain Michael Clarke brought fast bowler Mitchell Starc back on, and he struck with two wickets in two balls — Ross Taylor and Grant Elliott. The Australians hoped anew.

However Corey Anderson, with Kane Williamson steadied the ship for New Zealand, taking the score to 131, 21 short of the target, when another collapse occurred. Maxwell dismissed Anderson for 26, then Starc did for Luke Ronchi and the score was now 6-139, with New Zealand still clearly in the favoured position.

But then Cummins got rid of Daniel Vettori for 2 and then Starc nearly brought it home. He steamed in and let fly with two of the best yorkers you will ever see, dismissing Adam Milne and Tim Southee in two balls — his second two-ball-two-wicket effort of the innings.

Now New Zealand were 9-146, still six runs short. However watching all this from the other end was Kane Williamson, still solid at the crease on 39 n.o., and he saw that this was rattling his team, and so he made the definitive statement in one day cricket and this match.

Pat Cummins came lancing in and delivered another thunderbolt, but Williamson just took one step forward and blasted the ball over the long on boundary for six, taking the New Zealand score to 152 and victory in one hit.

Heartiest congratulations to Williamson and New Zealand for holding their nerve.

Elsewhere in the World Cup, the game we were all following was of course Scotland and Afghanistan. I was supporting both these teams, so was a bit divided. However it was great game with both sides doing well. Scotland batted first and posted 210, with contributions shared, six batsmen adding 20 or more.

Then the Afghanis took to the crease and took us all to the edge of reason, and our seats, eventually winning in the last over by a single wicket. Samiullah Shenwari being the major contributor with 96.

This was Afghanistan’s first ever win in the Cricket World Cup and so well done them. It’s great to see them out here on the cricket field.

Another notable result was Pakistan defeating Zimbabwe. This was Pakistan’s first win and lifts them off the bottom of the table in group B.

So, well done Pakistan for their first win, well done New Zealand for holding their nerve and well done Australia for not giving up in a seemingly unwinnable game.

And also well done to Afghanistan for winning their first match.

And, of course, most of all, well done Meg Lanning and everyone at CARE for improving water supplies for as many as they can.

VIDEO: A collapse, a chase and a pasting: New Zealand beat co-hosts Australia by just one wicket in a dramatic... http://t.co/bTFnchBltJ