Two small primary schools and their mottos: A case study

Experienced educator Dr Lee Duffield looks at the mottos and exhortations of two neightbouring primary schools to consider how they may differently affect students throughout their respective lives.

“Some of these schools don’t even have a school motto!”, said the then Education Minister Brendan Nelson, some years back.

However much that fact scandalised the touring Minister, it is a truth that a few inspiring words can go a long way to spell out required values and culture.

“Strive to Win”, “Wealth and Power”, “Keep the Upper Hand” — exhortations that suggest a certain kind of school and its desired human product, maybe to the liking of the motto-fancying gentleman mentioned here.

The memory of that ministerial utterance came back when I noticed some ideological posits appearing on billboards around primary schools in my neighbourhood.

What’s in a few words?

It seemed worth investigating and it did turn up some kernel ideas as to different things that educators, families, Australia might be up to as they raise the young.

Two actual schools make up this small case study, complementing my earlier piece for Independent Australia last week about universities, and the question of whether learning should, or should not be mainly “short, cheap and practical”, angled just towards jobs in the current economy.

The schools are in adjacent inner-city suburbs, both “gentrifying” areas with young families driving SUVs. One might be seen locally  as a little more “alternative”, the other more “bourgeois”, but on actual evidence, like voting habits or real estate values, it would be hard to mark substantial differences.

The first place, which can be called Milton School, is well in the category of a highly-maintained premises, exuding love and pride — responsible to say the least.

It is the kind of setting where conscientious parents with adequate resources ensure immaculate gardens to go with the new safe swings and a swimming club. They certainly ensured getting one of Prime Minister Kevin Rudd’s special buildings, part of the big spend antidote to the Global Financial Crisis.

For families acting together, adding on to what the state provides can change an ordinary public school into something like a smallish community-based private school — for a smidgen of the usual cost of private education.

At all approaches to the actual premises the visitor is confronted with signs spelling out the chief ethos: 'Respectful, Responsible, Safe': 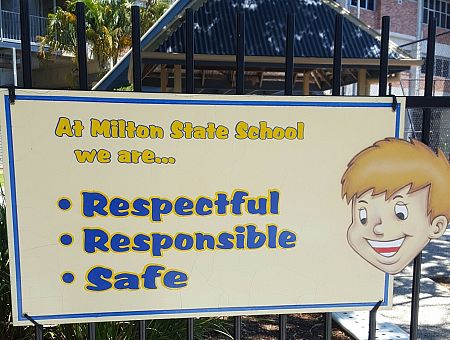 Something seemed to jar with this incantation, probably because the three-step program can be followed and enforced as a set of behaviours — no absolute need for the youngsters to internalise it.

It might easily denote a life wholly other-directed and rules based — but let’s not go too far.

Even while it’s a possibility, it would be drawing a long bow to say that such a well-meaning proposal can facilitate only a corporatist life where assertive human rights hardly get a look-in.

In fact, there looks to have been some “subversive” activity going on down the back at this particular school, where they have painted add-on slogans on a shed, acknowledging the more humanistic side of things: 'Imagine', 'Discover', 'Create', it says: 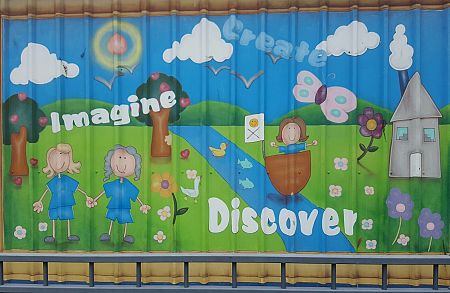 Why down the back, though?

That seems to highlight the problem with the three privileged values: that they are not only prescriptive, but pushed exclusively, in effect smudging out any competing ones that might make things complicated.

I confess to seeing such focused insistence on best outward behaviour as a key to a life of rewarding conformity and confess also to an impulse to add some graffiti — extras like “Original”, “Reasonable”, “Fit” and “Free”.

The relevance of this to universities would be to ask how much the focused three-point regimen would dispose young learners towards the growing, I’d say problematical organisation ethic of higher education — even more than towards anything else.

Responsibilities at university are being laid out narrowly, not so much by the academic savants as by strutting bean-counters; respectfulness is defined, top-down, nothing to do with esteem for the learned soul; sensible risk management may turn into craven backside-protection in an organisational instant.

Will school leavers – respectful, responsible, safety-conscious – become over-prepared for that only, attending as earnest “customers” — out to get a quick and secure return on investment in the form of a job and, if possible, not let the experience otherwise mess too much with what is inside their heads?

We could call that, also, apt preparation, or inoculation for an overly-orthodox organisational life after graduation. 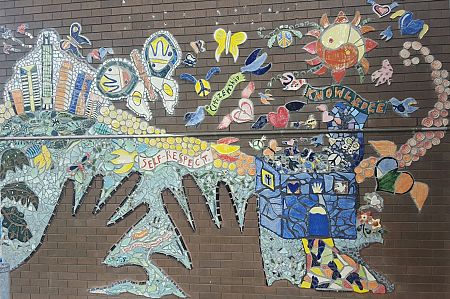 Which brings up the second school, which can be called Petrie Terrace, and its arresting wall mural, showing the place situated in Earth and environment and an Indigenous presence, with also a different three-word exhortation: 'CITIZENSHIP', 'KNOWLEDGE' and 'SELF-RESPECT'.

The school has the same kind of organisational concerns as the one over in the other suburb: signs enforcing two-minute parking by Mums, visitors to report to the office, no dogs, and so on.

Yet the motto has a starkly different appeal, the values being more about human characteristics and development of the person — not so much makeable into, or made up out of governable behaviour.

Good citizenship attitudes, achieving knowledge and even acting out self-respect are all enforceable, but clearly by linking them together, the educators behind the scheme were not thinking of that.

They have proposed ideas about what might happen inside each child, how with freedom and good tutelage he or she might become a fully grown-up human being.

To again refer to the first article in this two-part set, we have the awkward, persistent liberal proposition that if you have properly studied something, you have a good chance of being able to do anything.

The actual test is the growing of the organism brain and all, so that the young thinkers begin to function autonomously, solving their own problems and those of the world — individuals working freely with others.

PRESCRIPTIVE BEHAVIOUR OR CHANGING THE PERSON?

Even in the jargon of organisations, we know about “human capital” and the like.

The proposition here is that building it up to the best standard means not ticking boxes, but learning and growing.

Without that, goals of “Excellence” proclaimed for different schools cannot be that convincing.

On the other hand, working on the three characteristics – being a good citizen in a society of inter-dependent players, developing your knowledge for its own sake, and having good self-respect – is a wholesome and highly practical guide.

The experience of the children may well be the same in the two locations visited here out of school hours, since children will be children and they are neighbours.

The difference in the rhetoric about what they are going through, between the prescriptive behaviours or the aspirational human goals, suggests that, in 2018, a lot remains to be thought out and settled.

Dr Lee Duffield is a former ABC foreign correspondent, political journalist and academic. He was a member of the governing Council of the Queensland University of Technology and writes regularly on higher education.

The lesson from Finland 🇫🇮

- No homework for primary school children.
- Equal access for all children.
= One of the best education systems in the world.#Finland #TuesdayThoughts #Education pic.twitter.com/4Obq4QKonZ