Time to do better on Ebola, Tony Fiddler

Australia is once again a laggard in its global responsibility. As he has done with climate change inaction, Tony Abbott is failing Australians and failing the world.

What do AIDS and Ebola have in common? They share a capacity and potential to be a runaway scourge due to ignorance, complacency and bigotry. The response to both has been plagued with hysteria, misinformation and head in the sand denial.

In their manifest epidemiological stupidity, former U.S. President Ronald Reagan and Australia’s Prime Minister Tony Abbott share the podium. Reagan delayed any concern about HIV until the toll of the epidemic had soared. Tony Abbott has seemed unmoved by the plight of Africans and has been missing in action on Ebola and declared unequivocally no teams of Australian medical experts and personnel will be deployed to West Africa.

As with AIDS in the 1980s, the current plague of Ebola is being underestimated and ignored.

Abbott Government spends 21.6 million to secure next Pirates of the Caribbean film. 18 million to tackle #Ebola. Via @madashelltv #auspol

In summary, Australia’s contribution to fighting Ebola is spectacularly insignificant.

Had strong global action been taken to contain Ebola in March, we could have contained the epidemic. So says Laurie Garrett winner of 1996 Pulitzer Prize for her coverage of the 1995 Ebola outbreak in Zaire.

The death toll in West Africa is estimated, by the World Health Organization, to be near 4,500 and climbing daily. And by Christmas, the death toll could be rising by 5,000 to 10,000 per week, warns the WHO.

Denial is a defensive coping mechanism. It is life saving. It can mute unbearable reality until we can muster the strength to cope. It can keep hope alive against the odds, enabling us to strive to survive, or wait for help. But like the minor tranquilizer Valium, it is best used in moderation. Denial can worsen any catastrophe that humans or fate can construct. The ‘unsinkable’ Titanic ignored iceberg warnings and had insufficient lifeboats. Science warned of global warming decades ago, when action would have saved dollars and lives. Denial has meant little to no effective action has been taken.

That is a mad attitude. It’s like waiting for a small brushfire to turn into a mega conflagration.

The New York Times reports prompt responding has paid off for Nigeria so far. Once a case of Ebola was diagnosed, protective nursing processes were instigated. All those in contact with the patient were tracked down, isolated and monitored through the incubation period.

The WHO has declared this a success, declaring Nigeria Ebola free, with the proviso that Nigeria must remain vigilant as Ebola continues to spread rapidly in Sierra Leone, Guinea and Liberia.

In contrast, by the time Ronald Regan had even acknowledged AIDS, many potentially preventable infections and deaths had occurred.

So what are the similarities between AIDS and Ebola?

Reagan and Abbott have exhibited an appalling lack of leadership regarding AIDS and Ebola respectively. Both leaders kept an eye on the voting constituency.

At least the Ebola crisis has roused the Federal Opposition from its ‘we agree with everything’ torpor. Deputy leader and foreign affairs spokesperson Tanya Plibersek has called on the Australian Government to send in medical teams, declaring that the best way to protect Australians is to contain Ebola in West Africa.

President Obama has committed troops on the ground to construct hospitals and assist aid workers.

To paraphrase Mr Adamson, he said Ebola was "the worst thing" he'd "ever seen" and that even a small team from Australia could protect communities. Excuses about wanting ‘iron-clad’ guarantees of evacuation were, according to him, absurd. The Health Minister saying that people would die on the 30-hour journey showed to Mr Adamson that Peter Dutton had obviously never seen a case of Ebola, because you don’t die in 30 hours. He said that the death rate has doubled while the Abbott Government did nothing.

Aid organizations, including Save the Children, along with the Australian Medical Association and other health experts, are calling for Tony Abbott to do more.

Tony Abbott, who was more than ready to send troops into dangerous zones in Ukraine and Iraq wants a no risk guarantee for “our people”, saying it would be

“… irresponsible of an Australian government to order Australian personnel into this very dangerous situation.”

Beyond the obvious hypocrisy, Abbott is either callous, ignorant, or just not up to the job.

What is needed is not just a token donation of money, but people on the ground.

Also needed is the provision of expert training and (even simple) equipment — including protective gear, spray bottles, chlorine and logistical support.

The letter to the world from Liberia’s President sums up the perfect storm that has fostered the flood of contagion of the Ebola virus — years of war, civil unrest, weakened infrastructure, an exodus of health specialists, overwhelmed health services, sheer poverty and lack of world support.

'This fight requires a commitment from every nation that has the capacity to help – whether that is with emergency funds, medical supplies or clinical expertise''

'From governments to international organisations, financial institutions to NGOs, politicians to ordinary people on the street in any corner of the world, we all have a stake in the battle against Ebola. It is the duty of all of us, as global citizens, to send a message that we will not leave millions of West Africans to fend for themselves against an enemy that they do not know, and against whom they have little defence.'

As Ellen Johnson Sirleaf says, ‘we all have a stake’. Put simply, Tony Abbott’s message of mean spirited disinterest and misguided self-protection is costing lives.

Surely, we can do ‒ and are ‒ better than that. 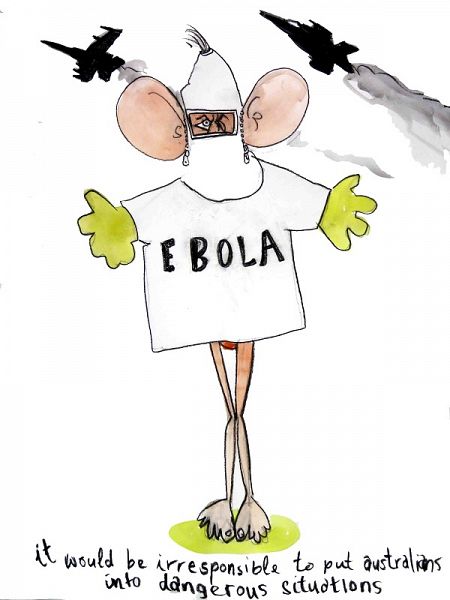