SUBSCRIBE   DONATE LOGIN SHOP
SUBSCRIBE   DONATE
Wanted for Robodebt crimes: Morrison, Tudge, Robert and Co
The Commonwealth Bank's illusion of ethics
Why privatisation of the NBN would be a good thing
Get a Mark David T-shirt!
An elegy to masks and why mine stays on
Sport

IA's sports guru Lachlan Barker missed perhaps the most remarkable game in football history due to a technical stuff-up — and he's not very happy about it.

RECENTLY, I WROTE A BOOK, which I hope you forgive me for plugging here. It’s called Long Way Round to Rehab.

It’s essentially a travel book, but also, I hope, provides a warning about how easy it is to descend into alcoholism, a perennial danger for journalists it seems.

Anyway, one thing I learned about the travel part was that people want to read about when things go wrong for the traveller: late or non-existent buses, ticks between the toes, downpours while hitching at the side of the road, that sort of stuff.

Well on the topic, nothing could have gone wronger for me than the events of Tuesday night.

I am covering two sporting events at the moment for IA, the Tour de France bike race, and the soccer World Cup.

So, Tuesday I watched the bike race until about midnight, then set my record facility to record the rest of the race, then to come on and record the first semi-final at the World Cup between Germany and Brazil.

Wednesday morning I got up, made my breakfast, then turned on the TV. To my utter, utter, horror, the transmission had dropped out, and an ominous “No Signal” was all I saw onscreen. I clicked to my recording device and got the full shock, minutes after I went to bed, the signal had dropped out, and I had recorded four hours of nothing.

At first, I was angry at myself, thinking I’d messed up the recording settings, but then the “No Signal” message made me understand that the signal from the broadcaster had gone wrong. I raced into the office and rang SBS, but there was nothing wrong at their end.

Then, as further phone calls revealed, it was some utter, (please forgive me here) F$%^-ing jackass at the transmitter station, who had decided in their wisdom to push through a channel retune at 1am on World Cup semi-final night – without any warnings I might add.

They did say that it should be back up by now, and so if I did an auto tune on my TV, the signal should return. I did so, and thankfully SBS popped back into existence.

So all was not lost, if I could get through the day without learning the score, I could still watch the soccer, with all the excitement of not knowing the score, when the replay came on at four pm.

So I went to my desk, and got my writing for the day underway, but in the process had to check my email.

There in the inbox was an email from a soccer friend which had '7-1' as the subject.

I frantically shut down my email without reading anything else of the email.

However, I didn’t know if Germany or Brazil had got seven.

Not much, but still something to look forward to.

Then I had a call to help retune a TV for a guest in the apartment complex I live in. I went around to the unit, and as I stepped through the door, I said, first thing, “If anyone knows the score from Germany and Brazil, don’t tell me, as I want to watch the highlights at four pm.”

I think they thought I was joking because, seemingly unable to help themselves, the male half of the apartment’s guests said:

“Do you support Brazil?”

I held up my hands in a threatening gesture:

That shut him up, thank god, so I retuned their TV and left.

Now it was lunchtime, four hours to go, I could still make it.

I then did some work researching an article and generally keeping my head down.

And I nearly made it. But then, around two pm, one of my work colleagues, whose partner is German stopped by my desk.

They lost by a Brazillion, 1-7, to Germany. #WorldCup2014 pic.twitter.com/LBeFayFMme

My head dropped in despair, I had nearly made it, but that chance remark blew it all away.

So thanks to some nameless jobsworth at the transmitter hub, I had missed the most remarkable World Cup semi-final in history.

Even if you are not a soccer person, I think you can glean that Brazil are the major nation in soccer and, while Germany are always contesting for the top spot, gubbing Brazil 7-1 is beyond extraordinary.

I watched the highlights without any sense of the excitement and just fumed through the match. Glumly, I observed that Germany were leading 5-0 at half time, and so the whole second half I spent listening to Martin Tyler explaining why this was the most remarkable match in history.

Afterwards, I sent a text to my friend who sent the email labelled “7-1” and told him my tragic story, and he texted back, and this is verbatim from my phone screen:

'Knowing your luck you will get to watch the other semi and it will be decided by penalties after a scoreless draw.'

What do you think happened in the other semi final between Argentina and The Netherlands?

Bingo, it was decided on penalties after a scoreless draw, with Argentina going through to the final.

So there you have it, as good as an example of the power of sod’s law as you will see.

The final between Germany and Argentina is Monday morning here in Australia, the broadcast starts at five am.

I will have less interest in who wins than in making sure that the damn signal is coming in.

I live in Byron Bay and if anything, and I mean anything, goes wrong with the signal, you will hear me screaming about it from your living room. 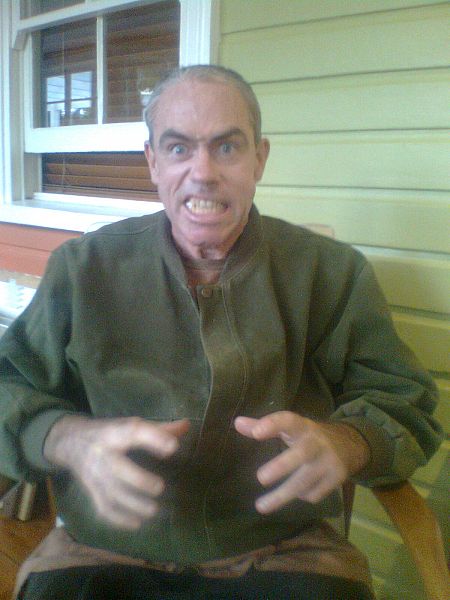 Lachlan Barker demonstrating what he would do if he can find whoever decided to retune the TV transmitter on World Cup Semi final night.

For the record here are the match stats.

In the other semi, it was The Netherlands 0 – Argentina 0 at the end of extra time. Argentina’s goalkeeper Sergio Romero emerged the hero, saving the first two Dutch strikes in the shootout, sending his team through to the final 4-2 on penalties.

In closing, I will just say that I vehemently believe in sod’s law, or have I already mentioned that?