The Superbowl ... and other adverts with a little bit of sport in the background

Corruption and advertising in sport. Once again, sports correspondent Lachlan Barker doesn't shy away from the tough issues.

SO, another sporting fortnight has come and gone and sadly, once again – and as usual – corruption in sport has to be acknowledged.

This is largely because of tennis, but even then it really comes down to what do we consider corrupt?

As anyone who has been a regular reader here will know, I consider any sport that has destructive advertising sponsorship corrupt.

In Australia, that means – most prominently – men’s cricket and football, both sports of course peppered by alcohol, gambling and unhealthy food advertising.

But then, recently, the Australian bike race was held in South Australia, and that was sponsored by a coal seam gas (CSG) company and so I took the opportunity to ignore that race.

Normally, I can’t get enough road cycling on my TV with the riders rushing through the beautiful countryside.

However, with the Australian bike race being

Broadcast, of course, is too laughable a use of the word when it comes to what Nine does to the bike race.

What channel Nine had on screen for that week was a load of ads, with some interruptions to show some cyclists on the rare occasions when we weren’t being told to buy the shit that commercial TV screams at us to purchase.

Then there is the soccer, which made another Halley’s Comet like pass back through the news. As is well known now, it seems those at the top of the sport have been less than honest with the organisation’s money, but worse than that is that the auditors somehow managed to sign off on FIFA’s books  at tax time each year without seeming to notice that large amounts of money was missing from the balance sheets.

Now it looks like the auditors will have to be investigated as part of the ongoing FIFA investigation. Quis custodiet ipsos custodes? – Who will guard the guards themselves – no less.

And so to the darker side of tennis, where the ABC’s Four Corners, led by journalists Linton Besser and Justin Stevens, did an excellent expose.

Their investigations showed that while the top tier of tennis is – most likely – corruption free, there are suspicions about the lower tiers.

The betting on tennis was the more subtle kind that is harder to catch. Rather than an obvious fix where a player ranked say 400 in the world beats a player ranked much higher, which can be seen as obviously suspicious. The fixing was more along the lines of the higher ranked player winning the match but, for example, losing the first set.

This is known as spot-fixing and only needs the higher ranked player to be in on the fix.

Doubles tennis, as a comparison, is obviously harder to fix and then at least two players have to be got at by those organising the fix.

And a big part of the problem for Australian tennis is that much of the alleged corruption investigated by Four Corners involves offshore betting agencies. Clearly, there is nothing an Australian tennis authority can do to stop these agencies fielding markets on tennis in Australia, yet it does leave us with an uneasy feeling about ongoing lower tier tennis.

However, possibly partly due to the Four Corners story, tennis authorities have now announced

‘... a sweeping review of the sport's anti-corruption regime.’

So we can have some hopes that tennis at all levels will be a clean sport.

So I’ll just say this in closing the whole sorry first 500 words: what doesn’t help the situation is bombarding, plastering, wall-papering, deluging and carpet-bombing Australian sports broadcasts with gambling advertising. By normalising gambling in this fashion we provide easy meat for the online betting agencies to take large amounts of money off those vulnerable to this destructive addiction.

So to the sport itself (finally).

First mention has to go to champ women’s soccer team Melbourne City. On Sunday Jan 31 they won the grand final of the W-League 4-1 over Sydney FC.

Melbourne City were undefeated on the journey to this victory, the closest they came to defeat was a nil all draw in the semi final, which they eventually won on penalties.

So well done to Melbourne City women – their first season as well I might add – for such a wonderful season long performance.

Banner says it all, about the new national champions, Melbourne City W League side #CityFamily pic.twitter.com/X1qhwQQG2K

On the green sward, our cricketing women played a three match 50-over series against India, won by Australia 2-1.

Hobart was where Australia clinched things, led by a ton up opening stand from Nicky Bolton (77) and captain Meg Lanning (61). Run rates were good, with all of the six batters required going at close to a run a ball, getting Australia home with three overs to spare.

India was best served at bat by opener Smriti Mandhana, with an excellent 102 from 109 deliveries.

In the bowling department, Australia’s attack was led by Ellyse Perry with 3-54 from her ten overs, ably supported by Megan Schutt with two wickets and a miserly 35 runs only allowed from her allotted 60 deliveries.

India’s women went on to at least gain a consolation victory in the third fixture, running down Australia’s total of 231 in the 47th with Mandhana (55) and Indian captain Mithali Raj (89) doing the heavy lifting for the visitors.

Final note for this sporting fortnight lies in the States with the American Football grand Final – the Superbowl – which was played today in Santa Clara, California, in the heart of Silicon Valley, south of San Francisco.

The finalists were the Carolina Panthers, from North Carolina on the east coast, playing the mountain men of Denver — the Broncos.

I lived in North America for two years and became quite the devotee of most of their sports. Baseball, particularly, supporting the pride of Canada, the Toronto Bluejays. Of course, also, no one who lives in Canada can get by without knowing something about ice hockey, where I supported my local team, the hapless Vancouver Canucks.

Canada has its own football, but this is pretty ridiculous, really. When I was there, they had eight teams and two of them – from Ottawa and Seskatchewan – were called the Roughriders, figure that out.

So for football I looked across the border to the US and began supporting the San Francisco 49ers. I was still drinking then and so watching American football wasn’t the onerous marathon it is if you try to do it sober.

Thus, I’ll highlight that with a coupla trivia questions that I have mentioned in sporting comments, but can always do with a further airing on this Superbowl day.

How many players are there on an American Football team? Answer: 11.

Explanation: while as many as 45 players suit up for game day and it looks like the Red Sea scene from The Ten Commandments on the sideline, if you count you will see that there are only 11 players from that team on the field at any one time. 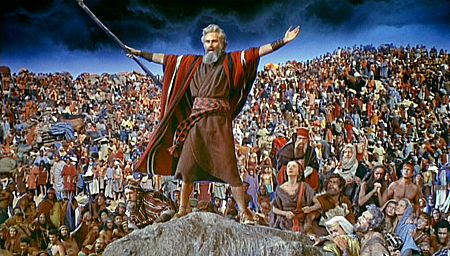 Moses: "Okay, as soon as the rest of the players get here we'll go on the attack." (Image source: insertawittyblognamehere.wordpress.com)

These 45 players make up sub-teams, attack, defence and special teams. The special team does things like punting or kicking a goal. San Francisco, for instance, lists 70 players on their player rotation at this time.

Former Australian rugby league player Jarryd Hayne is still listed as a fringe player, for those who were wondering what happened with him. He is slated to return to the 49ers for the next season in April.

This is, likewise, confusing as a broadcast of a regular season game lasts three to four hours and the Superbowl broadcast around six to eight hours.

With the constant stoppages in the game, so the quarterback can ring home and check with the babysitter and the end tackle can call his agent and maybe renegotiate his contract for the next season, it is the most fertile field for inserting ads in the broadcast.

Thus, an American Football game live is the nth degree of hell for someone like me who hates ads. The proportions are woefully, horrendously reversed and, on Superbowl day, for every minute of football there are an unseemly amount of ad breaks, not to mention the onscreen placement and scrolling ads to boot.

So I didn't watch the Superbowl, but I kept an eye on the newsfeeds to see if it was a close game. I usually tune in with a minute to go if it is a close game.

Result: Denver won 24-10. It was 16-3 at the end of the third quarter and figuring the men from Colorado had it won, I went outside and looked at nature from the seat of my push bike.

The exact moment when Eli realized he has to win Super Bowl #3 https://t.co/E1qdRLebAj