The Stars of the South

Australia’s women cricketers continue their good form, while the Australian men keep up their patchy performances back on home turf, writes Lachlan Barker.

Finally, some good news from the cricket field: Australia’s women cricketers are dominating the green sward for another summer.

So far, they have defeated the West Indies women’s team 4-0 in a 20 over match (T20) series and are now leading the current one day international (ODI) series 2-0.

This fits with the current world rankings, which sees England on top, India second and Australia third. The West Indies are ranked seventh of 14 and may have trouble holding that.

The first ODI saw the visitors post an eminently respectable 240 from their 50 overs and were in with a chance. However, the Australians quickly went out and dashed all hopes. Opener Nicole Bolton scored 59, while captain and number three batsperson, Meg Lanning went out and duly pasted the Caribbean bowlers to all parts of the Hurstville oval to score 95 off 107 deliveries with nine boundaries.

Australia ended up winning by three wickets with three deliveries to spare.

In the second international, Australia did it easier.

The Southern Stars batted first and posted 256, with Nicole Bolton again in the runs with 76 and Ellyse Perry contributing 72.

The West Indies started their run chase well, with Hayley Matthews scoring 89 and fellow opener, Kycia Knight posting 45. These two took the score to 115 for the opening wicket, but then it all fell apart. Knight was the first to go and then the West Indies lost 7-98 to be all out for 203 in the 47th over. The tumbling wickets saw the run rate slow to bank queue speed and left the visitors with no chance of a late resurgence.

The trend continued in Bowral for the third international in this series, with the Bradman Oval ringing to the sound of Meg Lanning’s bat pummelling the West Indian attack with merciless precision.

The visitors batted first and posted 220 from their fifty with, once again, openers Kycia Knight, 40, and Hayley Matthews, 60, leading the way to an opening wicket stand of 97. Then things fell away, with the visitors losing 6-122, to close at 220. The wickets were shared evenly among the Australian bowlers with Rene Farrell, 2-40 off eight, and Erin Osborne, 2-51 off ten, the leading wicket takers.

However, then it was the Meg Lanning show. Australia’s openers went early, but combining with Ellyse Perry, 64 n.o., Lanning went on to 135 n.o., her career best, to break the visitor’s spirits, and bring Australia coasting home to victory. Lanning hit 21 boundaries on the way, facing 127 deliveries, giving her a strike rate of 106.29. Any innings with a 100+ strike rate is quality batting.

One of my gardening clients is a retiree; Bill is his name and he is a big cricket fan. This week, when I went round to mow his lawn, I asked him if he followed the women’s cricket as well.

“Oh, yes. The fielding is great ‒ really slick ‒ and they have some very stylish batters. I quite enjoy it.”

This maps with my thoughts on the game as well, women’s cricket is on the up, the crowds are still small, nothing like the hordes that flock to the MCG on day one of the boxing day test for instance, 100,000 regularly do that, however there is a small but growing following for the Southern Stars.

This is reflected in the women players now being able to move to professional status, with the female exponents of cricket in Australia at the top level receiving retainers, which allows the bulk to focus on cricket full-time.

As for comparisons, probably the bowling speeds give a good indicator, the men reporting speeds of around 140kph in match conditions, when bowling multiple overs, while the women’s peak bowling returns figures of 125 kph.

Now retired Australian Cathryn Fitzpatrick is generally accorded the ‘fastest’ title, with speeds of 125kph, but current player Ellyse Perry is right up there with the same speed. That is pretty lively, and most male lower grade cricketers would find that too hot to handle.

So it’s all go for our female cricketers, as the game develops one hopes that there will be greater coverage and a steady move to larger grounds.

As for the men, with the T20 out of the way, one day (50 over) matches (ODI) got underway in Perth on Friday, with Australia playing South Africa.

Australia won the first international by 32 runs, but the shine was taken from the victory with captain Michael Clarke out injured with a pulled hamstring. He is currently having scans to determine the full extent of the injury.

Australia batted first and posted 300, with George Bailey top scoring with 70. Best of the South African bowlers was Vernon Philander with 4-45 off his ten overs.

South Africa went at it in fits and starts with the major contributions coming from captain AB De Villiers, with 80, and David Miller, with 65. However, with the captain’s run out in the 40th over, the South Africans fell away to close the day at 268, 32 runs short.

Relative newcomer Nathan Coulter-Nile was the best of the Australian bowlers with 4-48 off ten.

The second match, however, saw Australia’s batting fold badly, all out for 154, before eventually losing by three wickets. The South Africans passed the Australian total with 134 balls (22 overs) to spare. Mitchell Marsh showed the only resistance with 67, while acting captain, George Bailey provided minor support with 25.

Giant South African bowler, Morne Morkel, was the destroyer with 5-21 off eight overs, including 37 dot balls. Morkel is 1.96m (6ft 5in) high and his arms look like they’re three metres long on their own. On the bouncy Perth track, his pace and bounce were devastating.

So summer is getting moving on the sport field, cricket is on the radio and soon the real game, test cricket, will be upon us.

I’ll keep my ongoing complaint brief, the advertising for the ODIs has again been offensive; both teams, Australia and South Africa, are sponsored by alcohol companies and the matches so far have been replete with ads for unhealthy fatty chicken take away food, gambling and alcohol. The first alcohol ad came on my screen at 2.30pm on Friday afternoon. 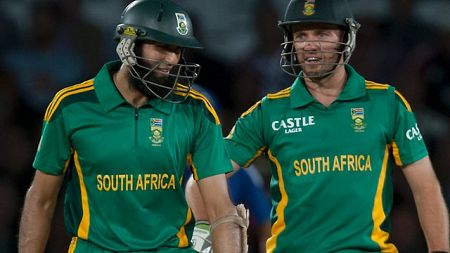 However, there is an upside; two South African players ‒ Hashim Amla and Imran Tahir ‒ are Muslims, with strong views on alcohol. They both politely, but firmly, told the South African powers that be that they would not wear any alcohol advertising on their clothing and this stance was accepted by the authorities.

So, if removing alcohol advertising can be done for religious reasons, one can’t help but ask why it can’t done for public health reasons?

How cricket's big bash is making us big: Why do governments continue to allow unhea... http://t.co/tcAtS3DwYu via @independentaus