AN UPLIFTING note for sport to start on this week, with 95-year-old Dr Charles Eugster breaking the record for the 200 metres sprint in his age group, a time of 55.48s. Well done to him, it really is a tribute to the never say die spirit.

Eugster attributes his success to positive attitude and healthy diet.

The record for the two hundred metres is, of course, currently held by Usain Bolt, at 19.19, but even so, this puts Eugster’s achievement look even better. Bolt is 29 years old, and Eugster has sixty years on him, so 55.48s is still an impressive run, particularly as Eugster is only new to the sport, having begun competing as a raw novice of 92.

We of course can only hope that when our turn comes around we can approach retirement age with the spirit of Charles Eugster.

Back home, the women’s footy in Victoria held its second round and the table is beginning to settle out. Diamond Creek were too good for the St Kilda Sharks, 71-57, while the students, Melbourne Uni, got moving for the year with a 50-31 defeat of Darebin. VU St Albans had another forgettable day notching two behinds only in their loss to the Eastern Devils, 69-2. The Devils are on top from the Sharks, while VU St Albans dwell in the cellar.

Hoping to do more than just list the results, I contacted the Eastern Devils and was able to speak with Devils co-captain, Meg Hutchins. Hutchins is a defender and plays mostly at centre half back.

One thing that I was curious about was aggression levels. Male footy, of any code, has large amounts of testosterone on show, occasionally boiling over into fighting and so I was wondering if the women’s version showed similar.

Meg hastened to to say:

“There is aggression at the ball, but never at the player.”

Meg did say that the women’s game is increasing in skills and athleticism and part of this process is the annual home and away exhibition match for the women of the caper. The Melbourne Demons and Western Bulldogs AFL clubs have thrown their support behind women’s footy and each year a two leg-exhibition match is played.

The best players from around the country are selected into two teams, representing the Dogs and the Dees, (the Dees is the nickname of Melbourne, short for Demons), and then play their match in the run up to the men’s fixture on the same evening.

The first match this year will be played on May 24 at the G and will clearly be a great outing for the women of the code. Meg herself is a possible for this match and will be looking forward to getting out there on the hallowed turf if selected.

The future of the women’s game is bright with the exhibition games. This will be the third year of the events, the game is gaining some attention. The head of the AFL, CEO Gillon McLachlan, has stated he wishes for a women’s national comp, possibly as early as 2017, but certainly by 2020.

Currently there are competitions at state level, so going national is the next step.

Certainly, if the drive and energy showing the tackle here is translated to this push for national recognition, then achieving a national comp is looking good.

The photo below is from the second division match between Montmorency and Pascoe Vale, with Montmorency the victors 76-2. 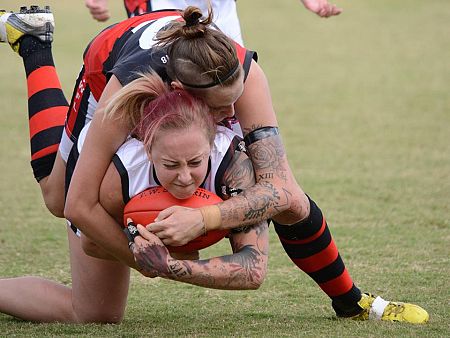 Aleisha Casley of Pascoe Vale (in the red and black) puts in a tackle on Jade Gormley of Montmorency. Determination writ large on both players here. (Image by Russ Canham)

Still at home, but on the water, the world surfing tour has moved to Western Australia with the current tournament at Margaret River. For once I am happy to name the sponsor of the event — the Drug Aware Margaret River Pro.

The women’s event has been rocked by the withdrawal of Stephanie Gilmore following an injury during a free surfing session.

Gilmore hit the sand hard, feet first and received a small but painful fracture to her tibia. She is currently undergoing MRI scans to check for ligament or other damage. Gilmore is hoping to be fit again for the next world tour event in Brazil on May 11.

The women’s event is at the quarter final stage and the match ups for the round of eight show Sally Fitzgibbons (Aus) v Lakey Peterson (USA) in heat one, Carissa Moore (Haw) vs Tatiana Weston-Webb (Haw) slug it in heat two, Malia Manuel (Haw) and Bianca Buitendag (ZAF- South Africa) in heat three and Tyler Wright (Aus) goes head to head with Courtney Conlogue (USA) in heat four.

The men’s event at Margaret River is at the semi final stage. The first semi has John John Florence (Haw) vs Nat Young (USA). Please note: this Nat Young is no relation to the better known Australian Nat Young — a pioneer of modern surfing from Australia. The second semi shows local boy, Taj Burrow (Aus) against losing finalist from the previous event at Bells, Adriano de Souza (Bra).

Margaret River is a heavy wave, with the ocean piling in from the roaring forties south of Australia and so anyone, male or female, that gets out there taking on those waves, certainly has my admiration.

Now that I think about it, next year’s event may see Charles Eugster out there on the board; I suspect all it would take is for someone to suggest it to him. He certainly seems willing to try anything to show that ageing doesn’t have to mean slowing down.

Be a good sport. Subscribe to IA from just $5.