A new report reveals the systemic destruction of koala habitats in Queensland and quantifies the total number of native animals lost each year from deforestation at a staggering 34 million. Sue Arnold reports.

IN A RECENT REPORT, entitled 'Tree Clearing: The Hidden crisis of animal welfare in Queensland', released by WWF Australia and the RSPCA Queensland, scientists estimate tree clearing in Queensland kills about 34 million native mammals, birds and reptiles each year.

This is an underestimate according to the report:

The enormous extent of suffering and death caused makes tree-clearing the single greatest animal welfare crisis in Queensland. Yet it is largely unmonitored and unstudied and neglected in wildlife policy and law.

Many animals die on the site of clearing. Some are crushed by machinery or falling trees. Others die more slowly from injuries, starvation and exposure. Others die as they flee from clearing in collisions with cars, fences or power lines, killed by predators or due to injuries or deprivation.

Tree-clearing: the hidden CRISIS of animal welfare in #Queensland #Australia via @wwfaustria https://t.co/H27u5WhzaD

Most tree-clearing in Queensland overlaps mapped habitats of threatened species. Despite this, most of it proceeds without any attempt to seek approval under threatened species laws. The enforcement of State and Federal nature and biodiversity conservation laws appears to have been minimal.

The weakening of controls over habitat destruction in Queensland together with recent similar changes in New South Wales have led to eastern Australia being listed as one of 11 global deforestation fronts. These are the areas which on current trends are predicted to account for 80% of all forest losses up to 2030. Australia is the only developed nation in this ignominious list.

The report makes a heartbreaking case for not only immediate protection of habitat but an urgent need for wildlife laws that ensure monitoring and enforcement are mandatory provisions. Thus far, there has been no response by the Palaszczuk or Turnbull governments. Not surprisingly, there has been almost no mainstream media coverage of this report. 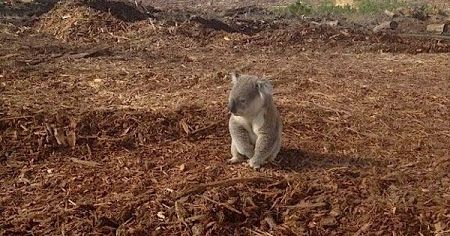 All politicians should be forced to read the information and then update themselves on the situation in their own state. The ongoing destruction of native animals, birds and reptiles demonstrates unequivocally that Federal governments (both Labor and Coalition) have so severely weakened the Environment Protection & Biodiversity Conservation Act l999 (EPBC) legislation they are incapable of protecting listed wildlife.

In fact, there are no provisions in the EPBC Act which would allow for emergency action to address wildlife crises.

With the complete refusal of both Coalition and ALP governments to address the appalling loss, much less recognise their existence, the future for Australia’s unique species, particularly the koala, is looking very grim.

The Turnbull Government is consumed by its "jobs and growth" mantra, bringing over 200,000 immigrants to Australia annually. With major urban developments, mining, highways and massive land clearing, it's a perfect storm for an environmental holocaust.

The plight of Queensland’s koalas provides the most telling example of respective Queensland governments’ policies of extinction.

Let’s look at the background:

As everyone involved with koalas in Queensland knows, habitat protection is the primary priority if the species is to be saved. There’s plenty of available current and historic habitat maps. Monitoring undertaken by community organisations and some local councils is all ignored by state and Federal governments. As for the two koala precincts, if the koala mortality continues at the current rate, if any precincts are created they will likely be home for a tiny relic of the South East Queensland population.

Listed below are some of the gems from the 'Koala Expert Panel Interim Report', which highlight the extent of government inaction:

This is despite vocal, passionate community advocacy.

Given that the Queensland election is likely to be declared in the near future, there’s little possibility that either Labor or LNP parties will pay anything more than lip service to the koalas’ plight.

Thousands of concerned Australians have taken to the Koala Crisis Facebook page to air their desperate concerns over the plight of koalas. Yet the mainstream media remains indifferent with the most blatant censorship of any information regarding the environmental crisis in Australia.

A Federal Government recovery plan for Queensland koalas will not be available until June 2018 — six years overdue, as it was required when the koalas were listed as "vulnerable" under the EPBC Act, in 2012.

It is indeed a shocking indictment of political policy and a betrayal of future generations, both human and non-human.

Sign the petition to save koalas from extinction here.

Environmental annihilation — brought to you by Roads and Maritime Services @koalacrisis https://t.co/dXvHwTavAI @IndependentAus

Stand up for the little guys. Subscribe to IA.