Was John Howard's Australia the place admirers like Tony Abbott promote? 'The Happy Land' is Graham Jackson's satirical alternative reality. This challenging work, illustrated by Gee, consists of thirteen Papers written by the major players in a dark period in Australia's short history. Here, we see new minister Ruddock, or warden of the inland ports, ingratiate himself upon the prime minister. 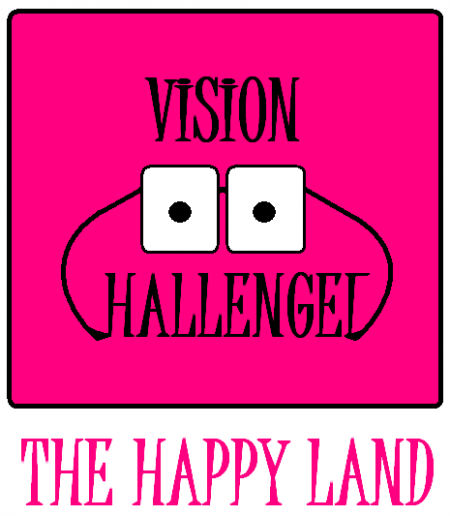 For the moment it was true, although the wife of the historic township’s policeman gave them all a generous meal shortly after. There was even a hot chocolate with marshmallows for Jack. In the meantime her husband contacted his superiors, so the news of Jack Blight’s whereabouts quickly reached the Prime Minister’s bunker in parliament house. Later, he couldn’t recall if he’d received the report or not — but they were busy, exciting times, with the country’s attention focused on Ruddock’s promotion to the combined position of Protector of Asylum-Seekers and Father of Fingerlings. Coward made a note to find a similar title for himself.

On the other hand, Coward reflected, there was a resonance in prime minister that would always be hard to beat.

In the adjacent office, Ruddock sat at a desk as bare as Old Man Plain. Anyone who didn’t know him might have seen in his thin, set lips the ghost of a smile, but Coward would have recognised his minister’s expression of intense concentration. Both men were sitting upright and stiff, expecting invasions from every side, although in the event it was only the tea trolley trundling down the corridor. 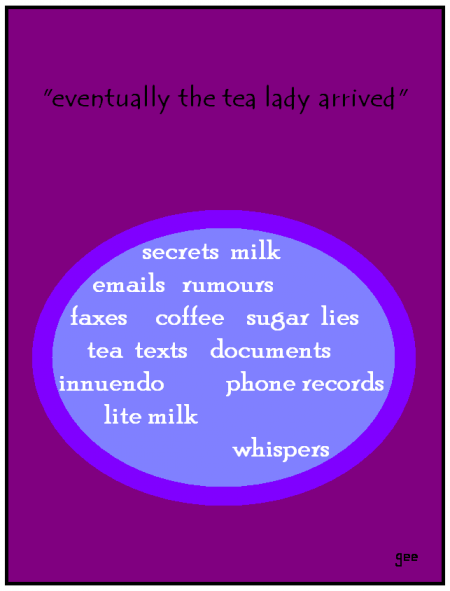 “Come through,” Coward advised. “No, not you,” he added as the lady poked her head through the door. “Later, later!”

She pushed on as Ruddock oiled into the leader’s office.

“I’ve been contemplating the direction we might take after the Finley fiasco,” Coward began.

The Father of Fingerlings insinuated himself into a chair.

“With respect,” he said quietly, “it might be to our advantage to fuel the fiasco.”

“A pity he had to fall on his sword,” Ruddock replied with such blatant hypocrisy his leader laughed outright. Ruddock asked uneasily: “Where were we?”

What they were, Ruddock never discovered. As trivial as it was, the incident marked a turning point in Coward’s leadership, which thereafter became less approachable and more conscious of the dignity of his high office and of himself personally. Ruddock closed the door behind him as he left the Prime Minister’s office. His status had altered. But he would bear it with stoicism, for that was his nature, and in time would be rewarded for his silent support.

Events were on the move, as was young Blight. Beyond Jerilderie, before he began his trek across the Plain, he paused to rearrange his caravan. He’d decided that the dog, a kelpie, would have to share his burden. Fashioning the sling to fit over its back, he tucked a kitten in on either side and perched the mouse on top, like an Afghan on top of a camel. The likeable rodent would be their guide, pointing the way forward with its twitching nose, over the endless saltbush sands rippling away to the horizon upon which the fabulous Four Corners lay. 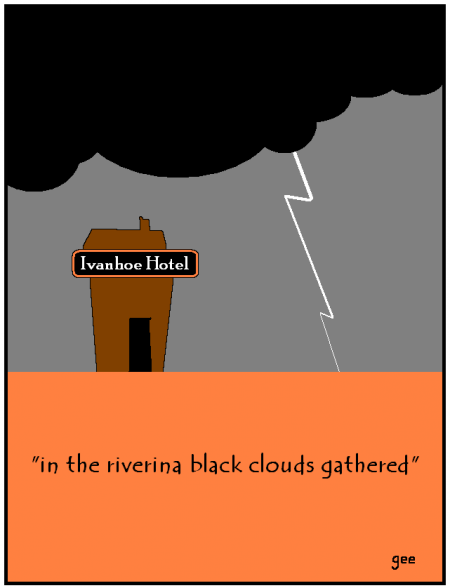 “No, no sign of your Dad here, lad,” the sergeant of police in the town had said, “but he might have gone west on the Deniliquin road before turning north to Hay.”

Hay was a prosperous town on the Murrumbidgee River. It was one of Blight Senior’s favourite destinations, with two or three good hotels to choose from. While the river marked the northern boundary of the Riverina, it wasn’t the end of Old Man Plain, which seemed to go on forever — or at least as far as Ivanhoe. When Coward first heard this name he experienced a sensation like a lump in his throat. His mind played tricks on him, conjuring up visions of regal banners and the sounds of silvery, clashing swords. His face whitened so perceptibly his wife became alarmed and called the doctor, who referred him to a specialist, who poked about in his gullet and ordered x-rays. The radiologist asked him to drink something chalky, and not even an intense concentration on the White Cliffs of Dover, and other Scottish things, could overcome his disgust. Then, after all that, nothing was found. Coward could only make a resolution never to have a lump in his throat again.

Knowing nothing of these affairs of state, Jack Blight began his march. Taking his direction from the sun, he went north-west, despite objections from the mouse, who seemed to want to turn the dog round and go home. But home was no longer possible, cut off from the rest of Australia by razor wire and a strengthened guard at Wait A While Gate, which had replaced the Road Block and looked far more sinister. In other circumstances, the media might have accompanied the boy, sympathetic to his plight, but since the government had determined he was an illegal Fin, his ratings fell — as did his chances of getting off Old Man Plain alive.

Ruddock was appreciative. His prospects, his advisers believed, had never looked better — his general appearance, as his predecessor Reith might have said, had never looked so much like an eel. From time to time Coward allowed the door between their offices to remain ajar.

Away out in the Riverina black clouds gathered that would eventually cover the continent. On the darkening Plain, young Jack searched vainly for direction. The kittens were oblivious in their sling, asleep, but the kelpie was edgy and so was the mouse. In the event there was no rain, but much thunder and lightning, signifying nothing. With no sun to guide him, the boy could only guess at his direction and good fortune alone saw him arrive at Four Corners.

The caravan halted and rested, while the boy decided if he should press on or wait for his father. He had no doubt his father would come, because Blight Senior always came home, even after long hauls north through Ivanhoe to Wilcannia on the Darling River. There were no signposts at Four Corners; no way of knowing which way was forward or back, unless young Jack trusted the nose of his mouse, which always twitched back.

In his parliamentary bunker, the Prime Minister scratched the side of his nose as he looked at the map on the wall. He felt comfortable in his office, less so of the world beyond. Of the mind of his own People he was certain, since so many were like him, which was why it had always seemed wise to stay home. Occasionally, of course, he was obliged to travel — and not only for games of cricket or to consult the American President. Then, it was appropriate, if his advisers happened to know where they were, to ingratiate himself with local dignitaries. One day they might even notice his presence.

Ruddock was doing much better. The Prime Minister had a document in front of him awaiting his signature, approving yet another promotion for the Father of Fingerlings. That title, devised by a junior adviser, had never appealed to him. He had thought of the new one himself. The first Lord Warden of the Inland Ports would owe his position entirely to his leader, which was both appropriate and desirable.

Jake Blight would never owe anything to anyone if his father didn’t arrive on time. And that was by no means certain. Rain had inexplicably fallen and the tracks across Old Man Plain were treacherous now. Only if he were returning to Finley with an empty truck would he be likely to get through. But the boy was confident, as boys usually are, and lay down with his menagerie to wait and sleep, while all around him the ocean of saltbush waved away to the inland ports — Balranald and Hay on the Murrumbidgee, Moulamein and Deniliquin on the Edward, and Finley on the Mulwala Canal servicing its own inland sea of rice.

Coward was just as confident. Jake Blight had perished on Old Man Plain, the Lord Warden was convinced. As convinced as one could be in uncertain times, at any rate, which was all one could ask. Already there were unconfirmed reports of Fins behaving erratically, refusing to eat rice and gazing gloomily through the razor wire. What if they should speak to the media? No doubt the Lord Warden had that eventuality covered.

Satisfied, the Prime Minister tidied his pencil away in its drawer, wondering if he could hear the sound of the tea lady’s trolley approaching.