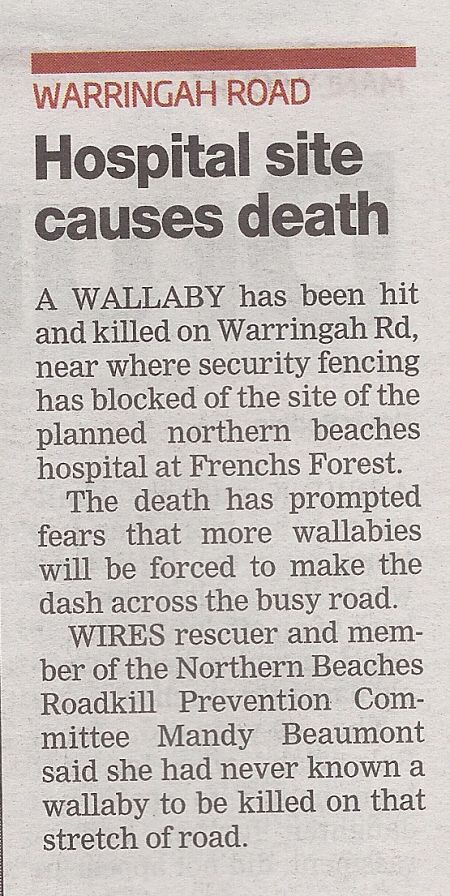 Overseas visitors are often disappointed when they come to Sydney with the expectation of seeing kangaroos bounding along our suburban streets. They might get more than they bargained for now, because at Frenchs Forest – just 13km from the CBD – the NSW State Government's Health Infrastructure Commission has locked out wildlife, such as swamp wallaby's, from a nature corridor so they are now being slaughtered when made to detour along the busy six lane Warringah Road.

Early last Monday afternoon, for instance, I found the body of a 12 month old female joey on the median strip near the intersection with the Wakehurst Parkway — it was apparent that it had been there since the early morning.

The problem is not that wallabies are trying to cross, but rather that they are being diverted from their intended destination by a new obstacle – the site fence for a proposed specialist hospital – which makes them traverse back, so they end up having to play "Frogger" with the traffic as they bound along the road looking for somewhere else to depart.

This is not only a risk to the animals, of course, but also a grave risk to fast travelling motorists, which is a rather a darkly ironic impact for a new hospital.


The chapter goes on to describe the "almost continuous green edge" along Wakehurst Parkway — yet it seems that merely a green facade is all that will remain.

Not once does this 84 page report mention that this endangered Duffy's Forest Ecological Community is the habitat for many animal species — like swamp wallabies, powerful owls and brush tail possums.

Without this corridor swamp wallabies will more than likely become extinct in the Manly Dam/Bantry Bay Area, especially if this colony becomes 100 per cent reliant on making the more risky crossings in the Roseville Bridge area for them to be able to find breeding partners.

Where is the Environmental Impact Statement for installing this fence — let alone a hospital? Can the Government promptly remove this before there is any more loss of life — animal or motorist.

The Health Department's policy, as shown on the P.U.S.H. website, is to centralise service delivery to avoid the costs associated with duplication; thus, when the new hospital is completed, with the closure of Mona Vale Hospital, Pittwater to the North will be denuded of hospital services and will have to rely on roads, such as the Wakehurst Parkway, which become impassable in poor weather.