SPORT: The return of the Funnel-Web(b)

SPORT for the period has been dominated by the Australian Open golf at The Grange course in South Australia.

All the big names were there, but most enjoyable for us Australians was that legend Australian golfer Karrie Webb was back out on the course.

During their Triple J years, brilliant sport satirists H.G. Nelson & Roy Slaven dubbed Webb "The Funnel" in reference to her surname, stemming of course from the hideously frightening Australian spider the Funnel-Web.

During Webb’s heyday, she dominated the world of golf, including winning the Australian Open with a record score of 22 under the card.

At the time, her main rival was Swedish golfer Annika Sörenstam and so Sörenstam was therefore dubbed by H.G. & Roy, the "Funnel Nemesis".

Thus, we would tune in to triple J on a Sunday afternoon and hear H.G. in his intro to the show announce something like:

"And in the U.S. The Funnel pulls into the lead at the close of the third round at the CordeValle course, but all the while Funnel Nemesis, Annika Sörenstam, stalks her footsteps across the course."

When H.G. and Roy left Triple J for commercial radio, it left a hole in my life that has never really been filled, so it was good to revisit, but back from the world of dreams to the current day we come.

Over 30,000 fans have attended the @WomensAusOpen at Grange Golf Course during the four days. pic.twitter.com/7TggF104cN

To say that this tournament was tightly contested is nothing more than the truth at the close of the third round there were 18 golfers within four strokes of the lead.

So Sunday dawned and the final round began. Webb was the highest placed Australian golfer, one shot off the pace at 8 under, while U.S. golfer Danielle Kang and Japanese player Haru Nomura led at 9 under.

Things remained tight through the front nine of the Sunday round, but in the back nine Webb and the others fell away and the final showdown came down to New Zealand’s Lydia Ko, the current world number one, and Nomura.

By the 13th hole, Nomura led Ko by a stroke. Then, on the 15th green, Nomura pulled another stroke on Ko, moving to a two stroke lead.

Nomura then nailed a long sinuous, snake of a putt on the seventeenth and was able to walk the 18th in relaxed fashion being three strokes clear.

She eventually won the tournament by three strokes at 16 under.

It was a terrific, maiden win for Nomura and she showed great touch and poise on the final day to achieve it.

However, I would also like to give great credit to Lydia Ko and Nomura’s other opponents, they were the first to congratulate Nomura on the 18th with the linked video shows their great sporting spirit.

In the video, you see Nomura nail the putt to win, and then Ko and the other golfers who Nomura has just beaten are the first to run on and congratulate her in a drink dousing high jinks moment. (Lydia Ko is in the shirt with white and dark bars).

So well done to all involved for a great tournament and, as ever with women’s sport, great sportspersonship.

For the men there are a couple of individual performances of note.

Nick Kyrgios had a breakthrough moment to win his first ATP tour tournament in Marseille.

Kyrgios beat Marin Cilic in the final 6-2, 7-6 and since Kyrgios is only 20 this augurs well for the future. One hopes that with increasing maturity Kyrgios can go on to begin converting his undoubted brilliance into more victories on the Sunday afternoons.

Across the ditch and test cricket is being played in New Zealand.

In the first test, I was alerted to great deeds afoot by my friend and cricket tragic Misha, who sent this Facebook note through to me.

Being Misha, I didn’t have to confirm this at Cricinfo, as he’s a better statistician than anyone.

It’s a remarkable achievement from Voges — so much so that for a short time he had the highest ever average in test cricket.

For those of a non-sporting bent, and who may have wondered about the hype around Don Bradman, here is the reason.

This is remarkable enough, but one day talking with the above mentioned Misha, he put this into context. Misha pointed out that the real indicator of Bradman’s greatness is that there is no one close.

After Bradman – apart from Voges now - the next on the list is the great South African player Graeme Pollock at 60.97.

At the moment, Voges is averaging 97 after 15 test matches and time will likely see him return to the field. But either way it is great stuff from Voges, and he deserves his acclaim at the moment for being the only batsman to come within a bull’s roar of Don Bradman.

Australia won the first test by an innings and 52 runs, helped not least by Voges’s 239 in Australia’s only innings.

In the current second test, another individual performance made the headlines, with New Zealand power hitter Brendon McCullum smashing his way to fastest test century ever — and done from a difficult team position to boot.

With New Zealand, well shaky at 3-32 McCullum decided enough of this rubbish and stuck his front foot down the wicket and began plastering the Australian bowlers all over the film set for the Lord of the Rings. 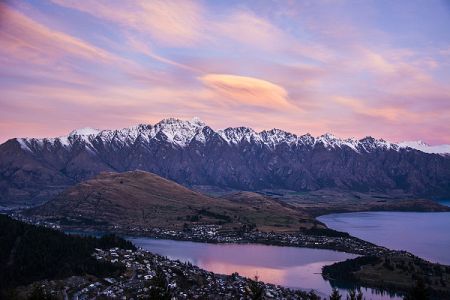 The “Misty” Mountains of New Zealand (Image via www.globotreks.com)

He reached a hundred in 54 deliveries, beating the previous high water mark of Viv Richards and Misbah-ul-Haq of 56 deliveries.

Unfortunately for New Zealand, McCullum’s explosive batting will likely not lead to victory. At stumps on day three, New Zealand are 4 for 121 in their second innings, still trailing Australia's mammoth first innings score of 506 by 14 runs. McCullum ended his illustrious test batting career after a freakish catch by David Warner in the deep for 25.

Overnight, Voges was 47 not out, however he was dismissed early in the day for 60, meaning his average has plummeted to a paltry (joke!) 94.

So that’s your ration for the period, as the great Peter Cundall from Gardening Australia used to say, well done to an assured Haru Nomura, a maturing Nick Kyrgios, a detonating Brendon McCullum and the focussed Adam Voges for their great individual performances.

But most of all, well done to the losing female golfers for their great sporting spirit in being the first to congratulate Nomura for her victory.