Matildas make it to Rio!

Sport this around features the Diamonds, Jason Day and David Pocock, as well as some great news about the Matildas. Lachlan Barker reports.

I logged onto Facebook this morning and was greeted with a message that made my spirits lift:

I enjoyed reading that message and thus it was appropriate that on the eve of this day, the Australian women’s soccer team, the Matildas, qualified for the Olympics in Rio with a 2-1 victory over the Democratic People’s Republic of Korea (DPR, formerly known as North Korea).

The stakes were high in this match; Australia sat atop the group and one more win, or even a draw, would see them through to Rio, while the DPR had to win to keeps their hopes alive.

Thus, the match was intense with both teams going at it hard for the full 90 minutes. Australia opened the scoring on the 18th minute with a top class strike from Michelle Heyman. This stilled the nerves and the game then went into a back and forth arm wrestle for the remainder of the half.

The second half continued in the same vein until the 77th minute when the Koreans equalised through Kim Su Gyong. It was a great goal; a small flick from Korean captain Ra Un-Sim drew Australian defender Claire Polkinghorne into the ball, leaving Su Gyong free on the left flank. She smashed her shot accurately and with venom into the top corner leaving Australian keeper Lydia Williams no chance.

Well that set the nerves jangling, I can tell you. However, hardly had I finished cleaning up the coffee I had spilt when the Korean goal went in when Australia took the lead again.

A measured cross in low from the right from Kyah Simon found Caitlin Foord in the centre. Foord was facing away from goal, so made the neatest of touches to lay the ball into the path of Katrina Gorry. Gorry made no mistake with her shot into the farthest square centimetre away from the Korean keeper.

As a goal this was world class, centimetre accurate cross, perfectly weighted touch back, and millimetrically accurate strike. Did the heart – and the nerves – no end of good I can tell you.

The Australians then resisted the Koreans for the next ten minutes and, finally, the whistle blew, signaling the Matildas would be seen in Rio come Olympics time.

With one match to go against China, with both Australia and China are through, both managers are likely to take the chance to give younger players a chance to get used to the nerves on the big stage. 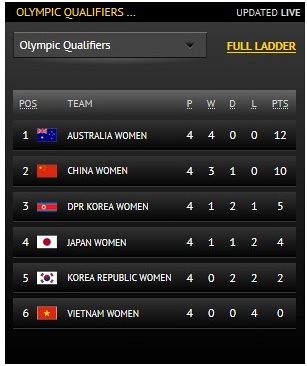 I was also impressed with Australian manager (as coaches are called in soccer) Alen Stajcic, for his masterful performance during the tournament, maintaining focus in the team and rotating his squad as much as practicable.

Upon clinching the Rio berth, Stajcic made note of those who weren’t on the field at the time and their role in this achievement, saying:

"This is a night of celebration, it’s one of the great nights of Australian football and I want the whole of Australia to realise just how big an achievement this is. It’s not just the players here but also those back home – we had several girls pick up injuries who couldn’t be with us – and all the staff as well that deserve to take credit for this performance."

That is what a team game is all about.

Australia’s other matches of note included a 9-0 thumping of Vietnam and a 3-1 defeat of hosts Japanin their opening match. Japan, as you may recall, were the team that knocked Australia out of the recent world cup in Canada, and so this victory was an achievement on its own and was the first sign that Australia were on the cusp of great things in this tournament.

Elsewhere in sport for the period, it is worth noting that Australian rugby player David Pocock won the ABC’s Sports Personality of the Year award.

I was glad to see Pocock win this as it reflects his multi-dimensional world view. Pocock has taken stands on homophobia and the environment and, whether you agree with those views or not, I feel it is good to see a sports person whose life does not begin and end the moment they step onto and off the field.

In my opinion, the appalling drunken carrying on that we see from some players, particularly in the football codes, is largely due to sport being the only thing in the life of those players. Which is why, going back a bit and certainly in rugby league, which I was closer to in my home state of NSW, when you signed to play for a league team, the club got you a job. Often, this was an apprenticeship for a younger player and this did a lot to keep the player's feet on the ground.

However, with the onset of big money in the game, this became largely a thing of the past and we opened the door to the genuinely professional player who trained four days a week for two or three hours then played on the weekend. The pressures on players in this environment are intense, and is – in my opinion – a factor in some of the appalling drunken incidents that blight the codes. Clearly, this is not good for the game, whichever sport it may be and so that’s why I find Pocock’s attitude so refreshing.

Other awards of note on the night were the Australian netball team, the Diamonds, winning the team award and golfer Jason Day capped a mountainous year by winning the individual male award.

So there we have it for the period. Well done the Diamonds, Day and Pocock, and great news about the Matildas. Next time we see them on the world stage they will be juggling soccer balls on Copacabana beach, which is a just reward for Stajcic and his squad.