Scott Morrison branches out into small business whilst carrying out his duties as prime minister.

MORRISON: I have called you here today to fill you in with what I have been doing away from my parliamentary duties.

Our great Australian way is to achieve more than one thing. Yes, more than the one thing at the same time. We are a nation of small business people. My current distaste for all things French prevented me from using a certain word.

Fortunately, I have remembered my very good friend, George W. Bush, pointed out something he finds very disappointing about the French, is they don’t have a word for entrepreneur. That frees me to say Australians are a nation of entrepreneurs.

In our great Australian entrepreneurial tradition I have established my own company and product. The "Morrison polygraph"; the lie detector test impossible to fail.

How good is that! We have created a circuit which reverses the sequence. It guarantees a pass for all the basic questions, like your name, marital status, parents' names and so on. All tricky questions, it will deem you a tick for having told the truth. Facile questions, such as your favourite movie, colour and band. You will get an occasional negative result. This will add to the veracity of the test.

Like all good emerging businesses, I have created an exciting promotional video, incorporating recommendations from some of my very close celebrity friends. 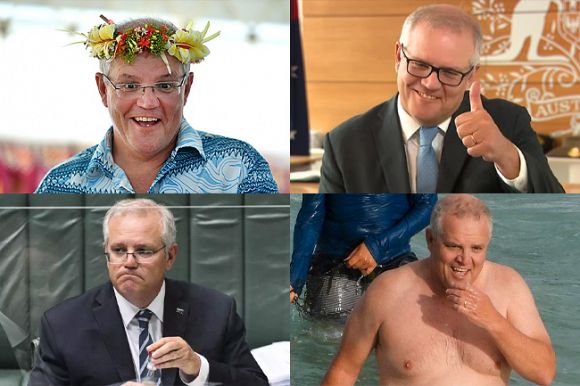 Which version of Scott Morrison is worse? Scotty from photo ops? The liar from the shire? Conspiracy Scott, the QAnon nut? So many to choose from!

(Morrison moves to the computer on the desk by his side, presses enter and an image appears on the screen behind him. He moves to his right.)

QUESTIONER: Mr President. Did you indulge in a bout of rumpy pumpy, nooky nooky, slap and tickle, jig a jig, with Monica Lewinsky?

PRESIDENT CLINTON: I did not have sexual relations with that woman.

(Questioner turns to the polygraph operator.)

OPERATOR: The machine is registering that is true.

(Russian President Vladmir Putin is wired up to the Morrison polygraph machine.)

QUESTIONER: Mr Putin, did you have anything to do with the poisoning of opposition leader Alexei Navalny, in 2020.

PUTIN: Me? No way. I was as surprised as you when I heard how sick he was. I thought it must have been a bad case of food poisoning from some rancid airplane food.

(Questioner looks at the operator.)

OPERATOR: [Nods] He’s telling the truth, going by the machine.

(Now President Joe Biden is wired up to the Morrison polygraph machine.)

QUESTIONER: Mr. President. Did you fart when you met Camilla, Duchess of Cornwall, at COP26 in Glasgow?

PRESIDENT BIDEN: No. Of course not. I went there to reduce, rather than add to emissions. 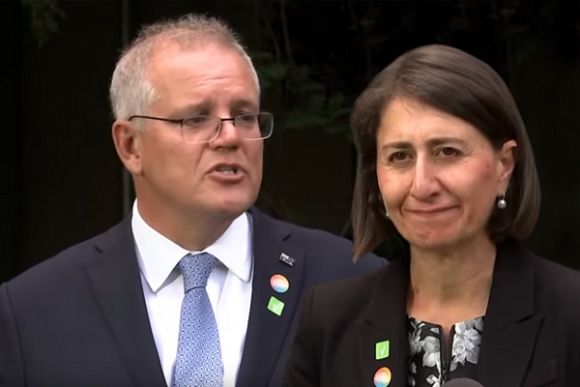 A letter of gratitude to Gladys and Scott

As a humble Victorian, Rocky Dabscheck felt it was time to acknowledge his superiors.

(The next person wired up the Morrison polygraph test is Donald Trump.)

QUESTIONER: President Trump. Have you ever cheated at golf?

TRUMP: Me? Never! I’m probably the greatest golfer ever. I have no need to cheat.

QUESTIONER: Have you ever cheated anyone in your business dealings?

TRUMP: Of course not! You may be hearing from my lawyer.

MORRISON: Now for some local input.

He restarts the video. Barnaby Joyce is wired to the Morrison polygraph.

QUESTIONER: Deputy Prime Minister, Have you ever been drunk in the in the House of Representatives?

JOYCE: You’re more likely to extract water from Eastern Australia Agriculture in Queensland than you are to ever see me drunk in the House.

MORRISON: I think it is only fair I wire myself up to the Morrison Polygraph machine and answer a range of questions.

(The operator wires the Prime Minister to the machine and nods when it is ready to go.)

QUESTIONER: Prime Minister. What is your name? 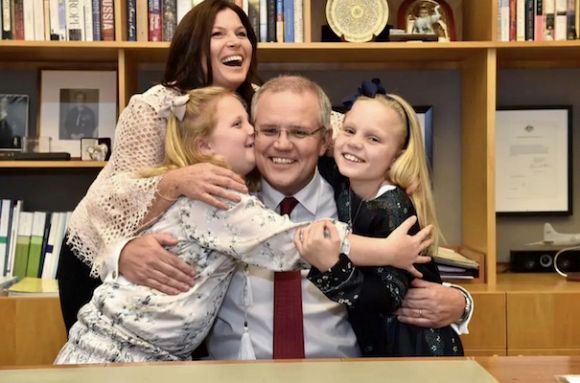 Scotty from Photo Ops: As a father

We go inside the Canberra bubble with Prime Minister Scotty from Photo Ops as a father – at home with his daughters.

QUESTIONER: Was Australia at the head of the queue to receive COVID vaccines?

MORRISON: Of course we were, otherwise I would not have said we were.

QUESTIONER: Were you serious when you promised a Federal ICAC would be established in your first term?

MORRISON: Yes. Very serious. If not for COVID we would have established one by now.

(Operator looks at the machine and nods yes.)

QUESTIONER: Have you ever used the term "Shanghai Sam"?

MORRISON: Only when denying I ever used that expression.

OPERATOR: Machine says that is the case.

QUESTIONER: Did you lie to French President Emmanuel Macron about the submarine contract?

MORRISON: Of course not.

OPERATOR: Yes. That is correct.

QUESTIONER: Were you as surprised as your parliamentary colleagues when the party voted you as their leader, and hence, Prime Minister.

MORRISON: You could have sat me down in my chair as easily as Speaker Tony Smith often did, when I heard the news.

QUESTIONER: One last question. Do you hold a hose?

MORRISON: I‘ve told you I don’t hold a hose.

OPERATOR: [Looks at the machine] No, that’s not true. The machine is registering that is a lie. You do hold a hose.

QUESTIONER: Well Prime Minister. Why is the machine registering your answer is a lie?

MORRISON: Well, err, I suppose I hold a hose now and then, when I water the front garden and lawn.

(Morrison detaches himself from the machine's wires.)

MORRISON: Well, there you have it. The Morrison Polygraph Machine. Every politician’s best friend. Cheap at twice the price. Battery operated and carbon neutral. Also excellent for domestic use.