HUGE congratulations to Independent Australia and especially to David Donovan on ten mighty years of forthright and courageous reporting of critical events — for Australia and the world. Particularly for enabling analysis of issues important to minorities neglected by the mainstream media.

One such topic of little interest to the established press is the gradual reformation within most religious organisations on the matter of sexual orientation and same-sex unions. Yes, same-sex marriage has been well-aired by the dominant media, as have been acts of homosexual misconduct by prominent religious figures.

But the subtle shifts in doctrine and praxis within Christendom and the other world faiths have much greater influence than is generally appreciated, particularly in developing countries where penalties for homosexual activity are severe.

Analysis in The Economist on Central American anti-gay laws asserted:

Gay and lesbian people worldwide are increasingly finding their relationships are accepted as equivalent to opposite-sex unions. Across the Western world – Europe, North America, Australasia and much of Asia – there will be no going back to the dark days of criminalisation and marginalisation.

Supreme Court ruling on LGBTQ rights: What does it mean and what changes? https://t.co/ZnmiQ2eatW via @usatoday

Earlier this month, the U.S. Supreme Court delivered a watershed LGBT+ victory by ruling that existing federal civil rights laws barring workplace discrimination on gender, race and colour extend to protect gay and transgender employees. This follows the 2015 decision by the same court to legalise same-sex marriage across the USA.

In a defeat for President Trump and the scribes and Pharisees in the U.S. religious Right, the decision was by a clear six to three majority. Two conservative judges – Trump appointee Neil Gorsuch, who wrote the ruling, and Chief Justice John Roberts – joined the four progressives.

Israel’s parliament is currently debating legislation to ban conversion therapy — the practice of attempting to change gay orientation to straight, via an intensive program of what amounts to brainwashing. Five other countries have already outlawed this practice: Germany, Malta, Ecuador, Brazil and Taiwan. It is banned in 20 U.S. states — as discussed here.

This is not to claim all is well for LGBT+ people everywhere. Far from it.

Even where court judgments or legislation have ended official discrimination, these do not make bigotry and hatred magically disappear. Gay and lesbian people will still face hostility and exclusion.

Countries continuing to criminalise homosexual relationships now number 73. This is up from 72 a year ago, but well down from numbers decades ago. These are all in Central America, Africa, the Middle East and South-East Asia. In most of these countries, religious belief underpins these destructive laws. Eleven countries still have the death penalty on the books for homosexual "crimes". 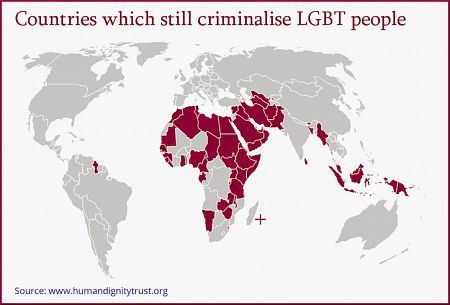 Recent shifts within the religious communities

We reported here a year ago that scores of major Christian denominations now accept same-sex marriage and welcome LGBT+ people into ministry. We noted that many Liberal Jewish communities do so also, as do some Buddhist and Hindu communities.

Since then, more faith groups have shifted in this direction. The Anglican dioceses of Newcastle in NSW and Wangaratta in Victoria intend to conduct blessings of same-gender civil marriages. Their request is now before the Anglican internal appellate tribunal.

Elsewhere, reform continues, even in conservative churches where creative strategies may be required. Victoria’s Baptist churches have several congregations where LGBT+ pastors and deacons minister effectively, despite being officially prohibited. Most of Melbourne’s inner-city Baptist churches support this, but not the larger congregations in the outer Eastern suburbs or in country regions.

Formal Baptist rules state that churches should not knowingly ordain a practising homosexual, a position quite offensive to many faithful Baptists. So it sometimes happens that a candidate for ordination in a private interview is shown a document explaining this policy and is asked if there is anything there that would preclude them from proceeding. If there isn’t, the ordination proceeds with no-one having knowingly broken any rule.

As Jesus said, “be wise as serpents and innocent as doves”.

Reform is worldwide. In defiance of Vatican authority, the Catholic bishops of Salzburg in Austria last month published a book which teaches that gay love comes from God and reveals God’s ‘goodness and humanity’. Titled The Benediction of Same Sex Partnerships, the book urges the Roman Catholic Church to reform its doctrines on homosexuality.

Challenge to the communities of faith

There are no valid religious reasons for excluding gay and lesbian people, whether in relationships or not, from full participation in the life of their community of faith. Passages in the Judeo-Christian scriptures traditionally used to condemn same-sex unions are increasingly regarded by scholars as misinterpretations.

The challenge to academics within the theological halls is to be more vocal in declaring errors of the past. They have the responsibility now to challenge those within their faith communities clinging to discredited views.

The religious communities should be a force for acceptance, harmony and love in the world rather than division and hate. Most of the time they are. This journal will continue to track progress over the next ten years, as over the last ten, reporting more gains – we hope – than retreats.

Israel Folau and the anti-gay lobby kicking against the breeze https://t.co/s9ZpVCNwsZ @IndependentAus

Alan Austin’s defamation matter is nearly over. You can read an update HERE and help out by contributing to the crowd-funding campaign HERE.

It's okay to be gay — Pope Francis says so https://t.co/FhtMqG68Jq @IndependentAus