Pandemic hospital beds: Who is prepared?

Some countries are better equipped than others to handle a pandemic. Alan Austin assesses readiness in Australia and the USA for the coming storm.

GETTING a national medical team ready for a pandemic is like preparing a footy team for the winter season. The hard slog required includes serious analysis of the opposition. We won’t know if the preparation was adequate until the season is done and for many teams, it won’t have been.

The usually reliable Forbes Magazine ran a bizarre infographic piece recently, purporting to show the USA is well prepared for a pandemic by comparing 'the level of critical care infrastructure across different countries'. 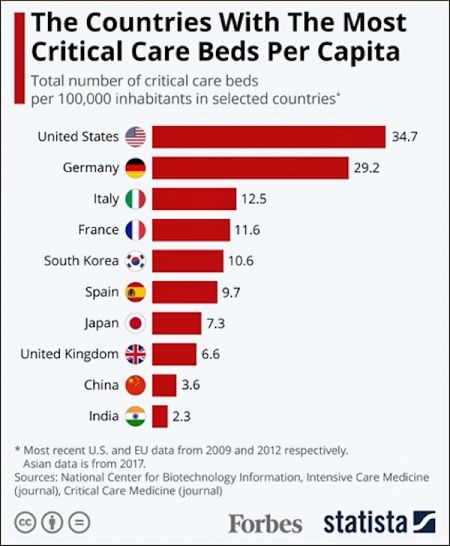 The graphic compared the number of critical care, or intensive care unit (ICU), beds among ten "selected countries". The USA came out well on top, although with a footnote acknowledging the U.S. data was from 2009.

There are three problems with this. First up, why choose ICU beds? Why not infectious disease unit places? Why not total beds? A thorough internet search of academic and other documents eventually confirmed that there is no recent data for all major countries on ICU beds, or on places in any other specialist hospital unit for that matter.

The Forbes article used three different data sources, from quite different periods — 2009, 2012 and 2017. This is problematic because, according to a 2012 research paper, ‘these units are diverse in their staffing, resources, and target patient populations, hampering the ability to compare and contrast data across ICUs’.

Second, why select just those ten countries? Independent Australia asked author Niall McCarthy from Statista that question and we were advised:

“We generally always include Germany, France and Spain as we maintain the website in those languages while the USA and UK are included for our dot com site.”

“India was included in this instance as it’s the world’s second most populous nation — we have a lot of readers there and the potential for a catastrophic outbreak is high. We also only have a certain amount of space on the infographic so some important countries are always going to get left out, unfortunately.”

Third, why do hospital bed numbers matter if the health care system does not provide affordable access to all those beds and to surgery, nursing care and medication?

Well, there are four exercises we can readily undertake. None yields encouraging outcomes for the USA. Or for Australia.
The world development indicators at the World Bank show the total number of hospital beds current up to 2014 or 2015 for many developed countries and up to 2012 or 2013 for almost all others. This is much more recent than 2009.

We can then see how those ten nations rank on total hospital beds with reasonably current data, all from the same source. It is quite valid to measure total beds. In this pandemic, all will be required. Yes, it would be great to have data specific to infectious disease or intensive care places. But we don’t. 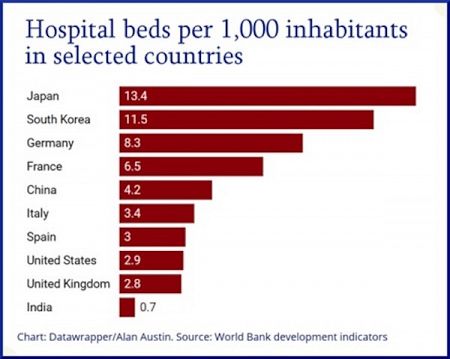 Analysis of total beds presents the USA quite differently — ranking eighth instead of first. Most disturbing, of course, is that this omits Australia. What were they thinking? It also omits several other major nations susceptible to the pandemic today worthy of inclusion.

So our second exercise is to assemble the chart for all 36 developed OECD member countries. We then find the USA ranks a lowly 27th, with Australia just below mid-chart at 21st. 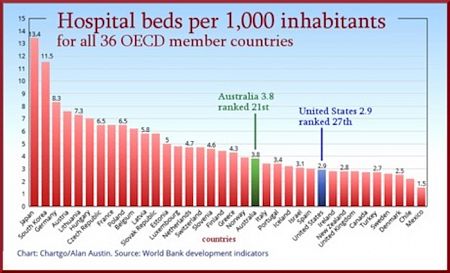 Our third exercise reflects every aspect of medical care there is — life expectancy at birth. This measure, also provided by the World Bank, current to 2017, is the ultimate gauge of effective health care.

Here we find a strong majority of 25 of the 36 wealthy OECD countries have a life expectancy above 81 years. Of those, 13 are above 82, including Australia at 82.5. Four countries are above 83 — Italy, Spain, Switzerland and Japan, which tops the table at an impressive 84.1. The average is 80.6. 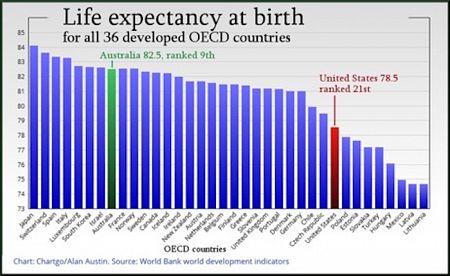 The final exercise is to measure the change in life expectancy over the four years from 2013 to 2017, the last year for which statistics are available.

Citizens of all but one OECD nation have enjoyed greater longevity over that period, by an average of 6.9 months. Best improvements have been in Turkey, South Korea, the Czech Republic and Ireland. Australia’s life expectancy increased by 4.2 months. 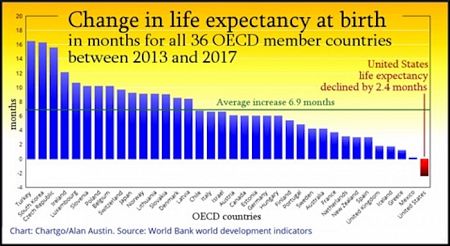 Multiple reasons for this have been explored in academia. The usual suspects are the opioid epidemic, obesity, heart disease, diabetes, farmer suicides, gun deaths — and poverty. Clearly, a significant factor is that health care in the USA is simply not affordable for large swathes of the population.

As much now as at any time, it is important that we deal with accurate data rather than hubris. This pandemic, as with the forthcoming footy season, is a matter of life and death.

An interactive map shows how overloaded hospitals in the US could get as coronavirus cases grow, region by region pic.twitter.com/w9B5X6A2M9