Australia's male cricketers win a high scoring match against Sri Lanka in the World Cup, while our female soccer players suffer a tirade of sexist abuse in a friendly against England. Go Bangladesh, writes Lachlan Barker.

SPORT BEGINS on a low point, with the Australian women’s soccer team, the Matildas, suffering sexist abuse in their match against England in Cyprus on the weekend.

The match was a trial – or friendly, as they’re called – in the run up to the Women’s World Cup to be held in July this year in Canada.

England won 3-0 and Australian coach Alen Stajcic made no reference to this abuse in his post match comments, but you can’t help feeling that it had an effect.

Reports are that male British soldiers, stationed on the island, attended the game, and sent forth volleys of sexist ranting at the Australian players, focussing on Australian player, Servet Uzunlar. The Australian substitutes also copped this abuse as they removed their tracksuits in preparation for entering the match.

And that, again, sadly puts me in mind of the racial abuse incident involving Adam Goodes in the Aussie Rules.

In 2013, Goodes was playing for his club, the Sydney Swans against Collingwood. At one point he was racially abused by a young female Collingwood supporter and he stopped playing to bring this racial component of the abuse to the attention of AFL officials. The subtext clearly was that Goodes was used to being abused by opposition supporters for being a Swan, but being abused for being Indigenous was clearly just not on.

I raise that incident because – and I can scarce believe that I have to write this – that incident occurred on during the Indigenous round of the Aussie Rules — a round to celebrate the contribution of Indigenous players to the sport.

If a high-profile player and true gentleman like Goodes can be racially abused during the Indigenous round, it shows how far Australia still had to come to overcome the widespread racism that still obviously exists in the Australian community.

As for the Matildas match itself, England won 3-0, thanks to a triple from England striker Jodie Taylor. This was a real knock to the confidence of the Matildas, as in their previous world cup trial match in this series, they had beaten The Netherlands 1-0, which was a great result, given the Dutch women have improved markedly in the last year and sit one place below Australia at 12th in the FIFA world rankings.

Post match, coach Stajcic made no reference to the sexist abuse, obviously doing his best to rise above it, and referred to his team’s inexperience as the main contributing factor to the defeat, saying:

“There were some good patches but there were a lot of lessons to be learnt. We got caught on the hop in the first 15 minutes and it was a naive performance both with and without the ball."

The British Ministry of Defence is said to be investigating as it was Defence personnel involved, which is a damn sight more than the English Football Association (FA) is doing, they don’t see anything wrong here at all.

"We've spoken to the (England) players, manager and assistant manager after the game and none of them have said they heard anything during the game worthy of reporting or complaining about.

"They appreciated the British Army's support and were happy to have photographs taken with the Army boys at the end of the game."

Oh for god’s sake. Still a long way to go, clearly, and one can only hope that maybe the arrival of International Women’s Day brought some reflectivity to that numbskull from the FA.

The Matildas play Finland in their next match tomorrow (Tuesday, 10/3/15) and of course we fervently hope for no repeat of the abuse.

Back home and the Cricket World Cup saw that famous quote from Charles Dickens, 'it was the best of times, it was the worst of times', visited upon Afghanistan.

Fresh from their first ever World Cup victory against Scotland, they were then brought back to Earth with the second biggest all time margin of loss, 275 runs, to Australia. The biggest defeat ever was New Zealand over Ireland in 2008, 290 runs.

In this game, Australia batted first and plundered a World Cup record score of 417/6 off 50 overs, while Afghanistan ended on 142 in the 38th. Bad as this defeat was, it could have been worse, Afghanistan are an associate, third tier nation, never forget that top tier England lost to New Zealand in a far worse fashion, with the Kiwis only needing 13 overs to complete the victory. So Afghanistan were beaten, but most definitely not disgraced.

In their next match Australia went on to score a really resounding, confidence-inspiring win over top tier Sri Lanka. An important win, as the knockout phase of the World Cup will soon be upon us.

Australia batted first and posted a formidable 376 from 50. Australian all rounder, Glenn Maxwell entered the record books with the second fastest World Cup hundred, 102 from 53 deliveries. The quickest ever in the World Cup was by Ireland’s, Kevin O’Brien, score off only 50 deliveries, during Ireland’s famous defeat of England in 2011. The fastest ODI hundred ever, of course, was the pink streak batting of South African captain AB de Villiers, with a hundred from a mere 31 deliveries in January this year.

So needing a daunting 7.5 runs an over, Sri Lanka were in trouble from the start, losing Lahiru Thirimanne in the second over. They then rallied and took the score to 135 when Tillarkaratne Dilshan fell for 62. The major contributor for Sri Lanka was Kumar Sangakkara with 104 from 107, but when he was out in the 36th over, with the score on 201, still 175 short of the target, the end looked nigh. However, Sri Lanka managed to get within 100 runs of the Australian score without the lost of another wicket and, with nine overs to go at thatr point, looked a fair bet to snatch victory. However, the game turned when Dinesh Chandimal had to retire hurt with a hamstring strain after a blazing half century and the Sri Lankans fell away, ending the day all out for 312 in the 47th over.

As for the standings, in Group A, Australia and New Zealand are through to the quarter-finals. Sri Lanka – despite the loss – are almost certainly through, with the fourth spot still in the mix. Bangladesh currently hold this position from England, and this spot will largely be decided today with these two teams playing each other in Adelaide. 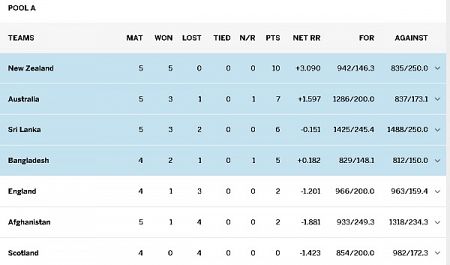 If Bangladesh win, it’s all over, if England win, then it goes down to the wire of the final round of matches.

In Group B India, Pakistan, South Africa and Ireland currently hold the qualifying positions, though the West Indies are by no means finished, sitting as they currently do, one victory outside the top four. 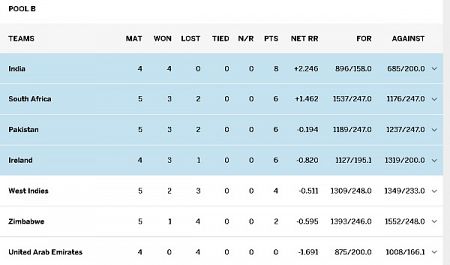 So the pressure goes on with the knockout phase looming, and so here in Australia we have no doubt in our hearts when we say “come on Bangladesh, beat the hell out of those Poms and make the quarter finals!”