League and Aussie rules gets serious

Sports reporter Lachlan Barker analyses the AFL and ARL matches this weekend as we come down to the pointy end of the season.

Ok, we’re finally getting to the rugby league and so time for some complaining.

As a New South Welshman, I was born and raised on rugby league, but these days I find I take far greater interest in Aussie rules.

The reason for this is I feel aggrieved by the way the NRL treats the game I used to love as simply a way to make money.

The NRL sold the game to the commercial broadcasters, cable and free-to-air – $1.025 billion for a five year deal – and what the TV companies now want, they get.

Thus, there are no live games of rugby league on free-to-air, on a Saturday or a Sunday.

The only live games are Thursday and Friday night, which is not really the weekend, when sport is most followed and a live game on cable Monday night — again, not the weekend.

Compare this with the Aussie rules, which has four to five free-to-air games on over the whole weekend.

The Sunday afternoon rugby league match on free-to-air is a delayed broadcast, done so the broadcaster can fit more ads into the telecast, disrupting the flow of the game, and annoying the life out of the spectator.

This selling of the game to television has led to some ludicrous lack-of-spectacle events on a Thursday and a Monday night.

The last two Monday night matches give an indicator.

In round 24, the Monday match was Penrith and Melbourne at Penrith Stadium. It was rain affected, to be sure, but only 8,994 hardy spectators entered the 22,500 capacity stadium — less than half capacity.

In round 25, North Queensland played Cronulla in Townsville. 11,712 spectators attended the 26,500 seat stadium — or less than half full.

In those smaller suburban grounds, things are sparse, but when the Thursday or Monday night match is played at Stadium Australia ‒ seating capacity 83,500 ‒ things descend into farce.

The viewer is treated to a lifeless outing, where the players and the referee can be heard clearly speaking to each other, such is the lack of atmosphere.

The pictures tell the story. 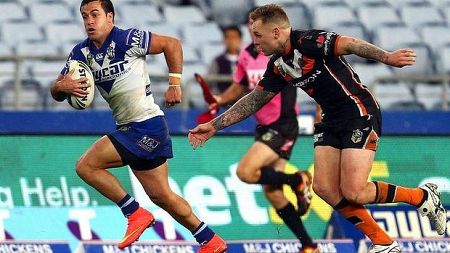 (Image by Getty Images via smh.com.au)

The Canterbury-Wests-Tigers match pictured here had 9,877 spectators dotted about the vast echoing emptiness of this giant stadium.

So I suggest this to the rugby league powers that be: make the Thursday and Monday night matches free entry to the ground.

It would be just a minor little gift to the long-suffering, always-having-to-fork-out-more-money, rugby league supporter.

It would also have the additional benefit of making the TV broadcast somewhat atmospheric.

Rugby league is always pushing the ‘we are the most popular winter sport in Australia’ barrow, but these ghostly night fixtures in more than half empty stadiums refute that argument intensely.

Compare the above graveyard of a game with this picture of the AFL’s regular season blockbuster at the same stadium. 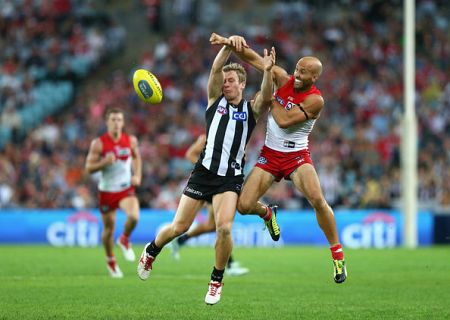 The Swans against Collingwood at Stadium Australia in a regular season match, Saturday night, March 29 this year. Clearly getting spectators there isn’t a problem for the AFL, and partly because the game is on a Saturday. (Image via zimbio.com)

Aussie rules can, literally, afford to charge spectators an entry fee; the rugby league, in my opinion, cannot.

Considering the TV companies have paid the rugby league $200 million a year to broadcast, foregoing a little gate money for some atmosphere is, literally, a small price to pay.

Anyway, that’s my grump, so to the actual round of matches.

Souths played Easts on Thursday night, and the Roosters ran out winners 22-18.

It was bit of a meaningless match though, as both were already through to the finals, in the top four.

And while we’re here, Easts are currently known as the Sydney Roosters — but they were Eastern Suburbs when I began supporting them in 1970, and they’ll always be Easts to me.

On Friday night, Melbourne defeated Brisbane 22-12 at, please note, Football Park, Melbourne, not at  “an insurance company stadium”. This secures a top four berth for the Storm, while Brisbane now have to wait and hope for both Parramatta and the NZ Warriors to lose, which would allow the Broncos a spot in the final eight.

First place will be decided at the Willows Sports Complex in Townsville tonight when the North Queensland Cowboys play Manly.

If you are a league fan and haven’t heard of the Willows Sports Complex, this is the true name of the Cowboys’ home ground — since 1995, it has had a succession of sponsors’ names.

Manly are currently equal first and if they win, they will take the minor premiership; if the Cowboys get up, then Easts will remain in top spot.

I do have to mention one sponsor’s name on a stadium however, as it is symptomatic of the league’s rapacious desire for more money, and is the most ridiculous name in the universe.

So, we’ll leave rugby league on that ludicrous note and pass over to the first week of the finals in the Aussie rules.

The first final, on Friday night, saw second-placed Hawthorn down the third-placed Cats of Geelong, 104-68.

A tight game to start, scores were level at the long break, but Geelong just didn’t have that last thimbleful of energy needed and faded away in the second half.

Essendon play North and this game..., ah, who cares about that.

On Sunday the Richmond Tigers play Port Adelaide at the Adelaide Oval.

It’s an understatement to say this game has generated some interest, as it was sold out in minutes; already tickets are being resold online for up to $999, sale price $40-$85.

The Tiges have been allocated the glass slipper, with many hoping for a Cinderella story. Of the eight teams in the finals, they seem to be the most popularly supported club among neutrals.

Port will not lay down though and are at home, but the Tigers have won nine in a row now, including beating first-placed Sydney last week, so will undoubtedly prove a claw-raking menace to the South Australians.

I say go Tiges — and that should keep the Victorians, at least, off my NSW-based back.

Most important of all the finals is, of course, the Sydney Swans up against Freemantle.

Supporting Sydney is always a bit schizophrenic for most Victorians. While they hate everything about NSW, and this is evidenced by the amount of support Queensland get from the rest of the country in the state-of-origin rugby league, they love the Swans for bringing the one true religion (as they see things), Aussie rules, to Australia’s most populated state.

However, Sydney are, or were, at least a foundation club — they began life as South Melbourne and so I’m guessing most outside WA will put their loathing of NSW aside and want those newcomer West Australians thumped handsomely.

Rugby league, please value your fans, they are not just there as your piggy bank.

One step closer! Swans win by 24 points and advance to a home prelim #goswans #AFLFinals pic.twitter.com/x7JjCDKkn6