Koalas are being left to die slow painful deaths during drought

Koalas are struggling to survive as their habitat is being destroyed and, as the koala is at the top of the pyramid, if you remove their habitat, every other species will also be wiped out. Sue Arnold speaks with wildlife warrior, Clare Gover.

FARMERS and farm animals are doing it tough out there.

But there’s little media about what’s happening to wildlife struggling to survive in a moonscape of cleared land, without food, shelter and water.

Clare Gover runs Return to the Wild, a rescue organisation in the Darling Downs, Queensland. She’s one of many carers and organisations working tirelessly on a volunteer basis to look after our increasingly distressed and dying wildlife. Clare’s work in the Darling Downs highlights the complete lack of concern, responsibility and compassion from federal, state and local governments with regard to the impacts for wildlife attempting to survive, as their habitats are destroyed by development.

A sad glimpse of the future as trees are felled, habitat lost and temperatures rise. Doesn’t have to be that we if action is taken now. Koala stuck up pole for 48 hours during heatwave https://t.co/p30lWbzKuh

As long as she can remember, Clare has rescued animals. For the past 18 years, she’s been rescuing koalas. Clare is not only overwhelmed with starving, injured and distressed koalas, but she’s struggling to keep sane in a situation which can only be described as hell on earth.

Her report is heartbreaking:

I'm almost burned out. Although the Palaszczuk Government supposedly stopped tree clearing, it’s still happening at a great rate. Farmers still have the right to clear land for cattle, if its previously been cleared.

In March, in the middle of an extreme heat wave, a koala became stuck up a power pole for two days in Toowoomba. Clare videoed the plight of the female koala, who was being swooped by magpies, barked at by dogs and obviously terrified by traffic noises.

Clare says that the koala had probably been trying to cross the road to find food when it became frightened and fled up the pole. Thanks to an Ergon Energy crew, the koala was rescued with a cherry picker, extremely dehydrated and heat stressed. Fortunately, after being cared for, the koala was successfully released into the wild.

#Koalas 🐨 are dying in #Australia due to land clearing and drought https://t.co/qBcvWB2JOP Viable population of animals need to be incorporated in land use planning before you start the chainsaws. pic.twitter.com/MnymXfPwuG

Habitat loss in this area is catastrophic. Land clearing, and mining have created a nightmare situation. Koalas are being pushed out of their habitats, remnant trees are being destroyed, eucalyptus trees are stressed with the dry and becoming more toxic as the trees attempt to protect themselves. We’re in a really bad drought and there’s no end in sight.

We’re seeing many distressed, sick and injured koalas because their habitat is reduced to small islands — there’s no connectivity. Neither Toowoomba Council or our State Government want to listen, ignorning the devastation being visited on our wildlife.

There’s no way young koalas can disperse because there’s no habitat left for them to move to. All that remains are isolated pockets, left in islands of habitat.

Almost every day, Clare has to make the long journey to Brisbane, the Sunshine or Gold Coast with sick and injured koalas and other wildlife. It’s a two-and-a-half hour journey from her care centre to the vets who specialise in treating koalas, a couple of hours waiting around for an outcome and another long journey home to an ever increasing number of animals needing her attention. 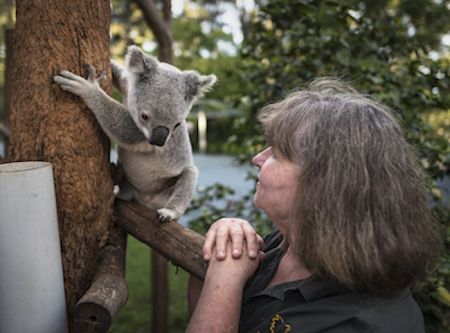 Our biggest problem is sick koalas, they’re on the ground because they’re too sick to longer climb trees. Healthy ones are crossing roads looking for food and getting hit by cars. The koala situation has reached a crisis situation.

The koala is the ambassador for native forests, they’re at the top of the pyramid. If you remove their habitat, you remove habitat for every other species dependent on their trees. Including ground dwelling creatures which live around the tree. When the trees are removed, all the undergrowth is taken out as well.

Black cockatoos and other bird species have nowhere to go, nor do greater gliders or the powerful owl. People just don’t seem to realise what happens when trees are destroyed.

Clare says that in her experience most people just want to cuddle koalas, they don’t think much further than having a photo taken.

@weathernetwork Cute alert is right, however the reality is the scorching temperatures and the Millenium drought continue to impact much of South Australia. #ClimateChangeIsReal #koala #WaterCrisis #environment https://t.co/ojTi7HoncA

Because caring for koalas is extremely labour intensive, there’s only a handful of dedicated helpers at her koala critical care centre:

Every wildlife carer I know is in the same crisis situation. It’s so dry, even along the coast. Kangaroos and wallabies as well as koalas are being hit by cars all the time. They’re coming to the roadside verges to eat whatever grass they can find or to access trees.

Most people leave injured animals on the road. Yet all it takes is some wheel bracing, as cruel as it sounds to put an animal out of misery. I’ve had people bring in photos of animals with horrific injuries just left to die a slow and painful death.

Clare believes that unless remaining koala habitat in Queensland is legally protected, there will be an ongoing no-win situation for koalas:

Without habitat, koalas have bugger all to survive on. There’s no point in finding a cure for any of the diseases they’re suffering from if we have to put the animal back into the same situation. All most all habitat is now privately owned land, the owners are not planting trees or ensuring retention of trees which would allow some connectivity. 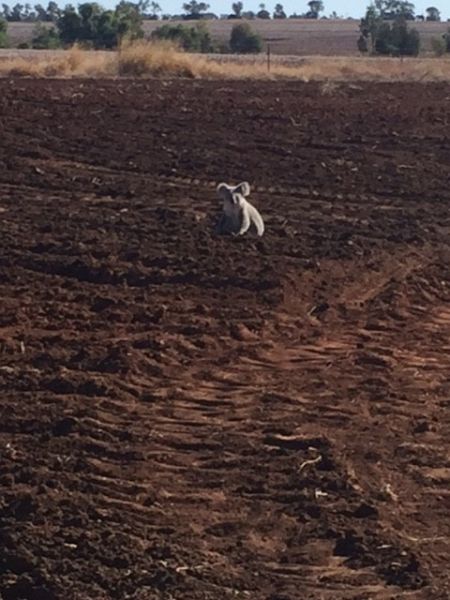 (Image courtesy Return to the Wild)