THESE DAYS, the first thing that happens when you apply for a job is that a series of checks are undertaken to assess your suitability. These checks may include the HR department investigating an applicant’s social media footprint.

IA decided to investigate the Twitter footprints of the two leading applicants for Australia’s top job at the next federal election, Prime Minister Scott Morrison and Opposition Leader Bill Shorten. Both footprints provide fascinating insights into the two leaders and provide a source of evidence for the autopsy of Wentworth.

Last Saturday’s Wentworth by-election result clearly rattled Morrison — his less-than-gracious speech, body language and delivery were in perfect alignment. Morrison said he knew it would be a tight contest and he hadn’t expected to win, but his words were delivered with the acidic vitriol of a spurned stalker. His body language thinly veiled the rage within.

So, why was he angry? Short answer: because Australians aren’t buying what he’s selling. His marketing-based political strategies are not producing the desired effect at the ballot box. And, he hasn’t got time to muck around with an election looming. Spin that is supposed to work just isn’t working.

Desperation and panic are beginning to creep into his once-exuberant speeches and press conferences.

Scott Morrison gracious as always 🙄 at Sharma’s defeat rages as the wagging finger shows loss of control. Anger directed at Bill Shorten & everyone except himself. Aggressive, hostile & worse & use of ‘I’m better than you ‘ superior gestures chin up looks down nose. #auspol pic.twitter.com/tfgC3ni1fP


Scott Morrison makes a sudden show of false bravado , grabs Frydenberg by the shoulder yanking him saying “Josh & I are going to lead that fight!” Morrison is asserting dominance &  control in an aggressive way. Josh has no escape. A threat  covered by  friendship. #auspol pic.twitter.com/ceKQ4TUeDR

In one of the largest swings in Australian electoral history, a female, gay, Jewish, Independent Professor, Dr Kerryn Phelps, wiped the floor clean with the Liberal Party — a seat the Coalition had held for 115 years. The seat had been held by former Prime Minister Malcolm Turnbull, a popular local who once-commanded a 17 point margin.

“He has not heard a message; he’s the same angry advertising guy who he was a week ago.”

Morrison, the former Managing Director of Tourism Australia from 2004-2006, was responsible for the “So, where the bloody hell are you?” campaign.

Morrison has been trying to sell the Australian public the image that he’s a normal, sports-mad Aussie bloke who loves his family, a barbie and a beer — the antithesis of his predecessor, “Mr. Harbourside Mansion”. Confirming Morrison’s belief that the entirety of the Coalition’s problems began and ended with Turnbull, policy appears to have been dismissed as a contributing factor.


This is what I believe... pic.twitter.com/90tflIBWub

Despite all polls indicating the public wants a shift in policy, chief political correspondent for the ABC’s 7:30, Laura Tingle, said in her analysis of the Wentworth by-election result that the Prime Minister doesn’t need to change policy direction, but rather to unite the warring factions of his party “while winning back disaffected voters”. Member for Petrie, Luke Howarth, echoed those sentiments and described Morrison, on the same program, as “a genuine, down-to-Earth guy”.

So, why can’t Morrison cut through to voters?

An analysis of Morrison’s Twitter activity may hold some clues. Since becoming Prime Minister, Morrison has tweeted 112 times, Shorten has tweeted 228 times during the same time.

In the early days of his prime ministership, Morrison touted his Government as the “next generation”, yet this has not been reflected in his Twitter feed. Promotional videos and photos, mainly of Morrison, dominate his feed with surprisingly few of his colleagues by comparison.

Morrison has retweeted only three of his ministers; Shorten has re-tweeted 16 Labor MPs.

By contrast, despite Shorten making twice as many tweets, he had significantly less self-promoting tweets — on most occasions, his videos and tweets focused on other Labor MPs.

On National Apology Day, Morrison tweeted about the issue once — a 1 minute 34 second monologue of his own House of Representatives’ speech. Shorten tweeted five times about the issue — he acknowledged and thanked Julia Gillard and included other Labor MPs and survivors.

Today, we say we are sorry. Sorry that you were not protected, that you were not listened to, for refusing to trust the words of children, for not believing you. As we say sorry, we also say we believe you. We say what happened was not your fault. pic.twitter.com/E71fjm69eg


Today was a tough day for so many Australians. But it was a day of humility and healing and with hope for the future. Here are a few photos from a historic day in Parliament. pic.twitter.com/0qYIEKdNSh


Julia Gillard had the courage and the leadership to initiate this Royal Commission – @JuliaGillard, we acknowledge you and thank you today.
https://t.co/igVNR44VVI


It's a very special day in Canberra, as we deliver a national apology to victims and survivors of child sexual abuse.

Delving further back in time, another interesting comparison is that last Christmas, New Year’s Eve and Easter, Shorten tweeted greetings on these occasions. Despite being a well-known, devout Christian, the then-Treasurer Morrison failed to tweet greetings on these occasions. However, he did tweet on 10 September 2018 his best wishes for Jewish New Year – Rosh Hashanah – as did Shorten.

Shorten has consistently maintained all aspects of his Twitter footprint over time. Morrison’s footprint indicates a radical shift after 24 August 2018, with a significant increase in self-promoting and image-softening tweets.

Morrison has tweeted 24 times about sports in the last two months, including four videos. Between 1 January and 23 August 2018, Morrison did not tweet once about sport, not even during the Gold Coast Commonwealth Games. This contradicts the “blokey” image Morrison is trying to sell and indicates his “sports mad” image is a fake persona concocted just to win back disaffected voters. 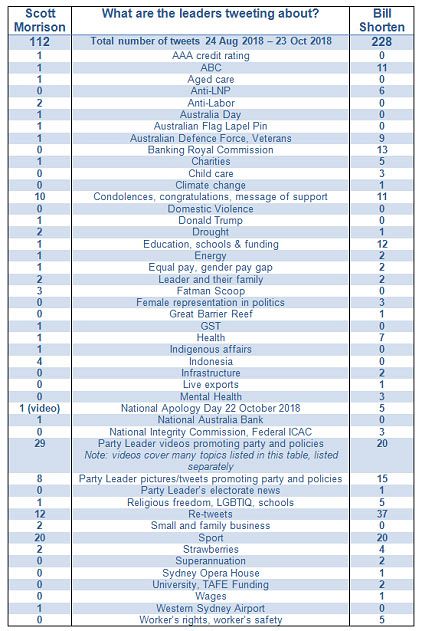 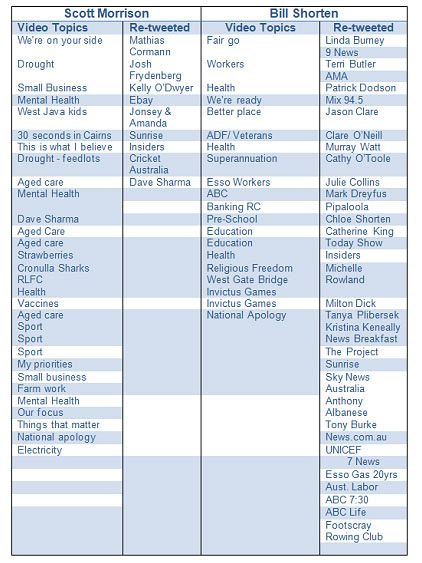 Aside from the self-promotion and concocted “blokey, sports mad” image Morrison is trying to sell to the public, he is increasingly using the old marketing technique and political strategy of “smoke and mirrors”.

If a sensitive issue arises for the Morrison Government, conveniently, there also happens to be a perfect, corresponding distraction as damage control.

On five occasions, Morrison has either tweeted a distraction or delivered a distraction via a press conference to get the country talking about something other than a simultaneous sensitive issue that could damage the Morrison Coalition.

16 October:MP for Reid, Craig Laundy, said in an interview on ABC’s National Wrapon Sunday 21 October that he had been notified on Monday night, 15 October 2018, that Morrison intended to announce the following day that he was considering moving the Australian embassy in Israel to Jerusalem.

“…I was told, as a back bencher, on Monday night of the decision.”

Within a few hours of the Coalition Senators voting for Pauline Hanson's “It’s okay to be White” bill, Morrison had notified his MPs of his decision about the embassy. It was announced at a press conference by Morrison the following day, Tuesday 16October, just as the story of the Coalition Senator’s racist vote hit the front pages around the country and the world.

The Morrison Government was in damage control.

This prompted much discussion around the country and distracted Australians from the “It’s okay to be white” voting debacle in the Senate, which was passed at 16:18, just hours before Laundy was notified. 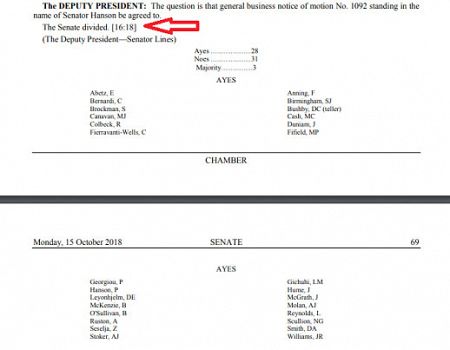 During Question Time in the House of Representatives, the same day of Morrison’s Embassy announcement, Deputy Labor leader Tanya Plibersek asked Morrison if he stands by his comment, made four months prior, in June 2018, about moving the Australian embassy in Israel:

“No, no, it’s not the Government’s policy. It has never been under review and we’re not doing it”.

Guffaws could be heard from the Opposition benches when Morrison replied:

“My statements in June reflected the policy of the Government at the time.” 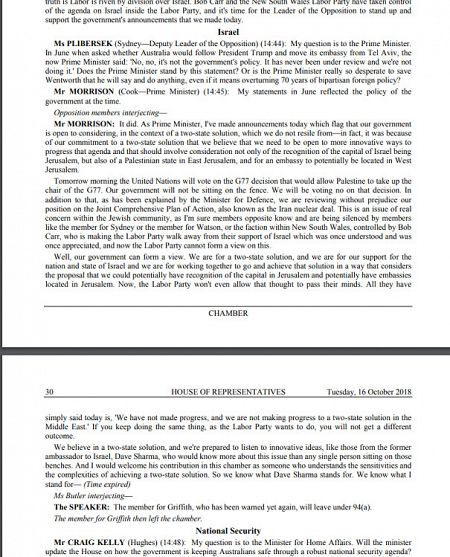 The embassy announcement was largely viewed as an attempt to win the Jewish vote in Wentworth. It prompted Indonesia to warn that the decision could threaten bilateral relationships and billions in trade. Neither leader tweeted about the issue.

Primarily, it was smoke and mirrors for the incompetence of the Coalition Government Senators after their embarrassing, racist vote.

Had moving the embassy been a genuine policy announcement, it would have been made a week prior to harness the devout Jewish voters casting a postal vote or pre-poll because polling day conflicts with the Jewish Sabbath.

Mathias Cormann accepted responsibility for the Coalition Senators’ en masse incompetence; they all claimed they had not read the four-line Bill which had been publicised and given to them weeks in advance of the vote.

The annihilation in Wentworth is a powerful indication that Morrison’s dual spin and smoke and mirrors strategies are two of the very reasons he’s not cutting through to voters.

We also found out yesterday that the media was briefed about the decision to review the embassy's location before the chief of the Australian Defence Force was https://t.co/Skaru46UJ8 #auspol