Fifty days of ScoMo: a chronicle of our new PM

Our current Prime Minister, Scott Morrison, has been in the top job for 50 media-filled days. Here are a few of the highlights of Australia’s newest, media-loving Prime Minister, as written by Belinda Jones.

Busy couple of days - swearing in the new Ministry, getting to work with the new Minister for Energy @AngusTaylorMP (or as I like to call him, the Minister for Lowering Electricity Prices) and meeting with @NationalFarmers to talk about our drought response. pic.twitter.com/hUj6QI0LSV

28 August: Prime Minister gives each of his Ministers an Australian flag lapel pin to remind them of whose side they’re on. Julia Banks announces she’s not recontesting her seat citing bullying.

‘MP for Chisholm in Melbourne says last week’s messy spill was “the last straw” and women have suffered in silence “too long”.’

Today I gave each of my Ministers a lapel pin with the Australian flag on it. I’ve been wearing this for many years now. The reason I wear it is because it reminds me every single day whose side I’m on. I’m on the side of the Australian people. pic.twitter.com/JAz5jPeXmD

We do not need ‘gender whisperers’ in our schools. Let kids be kids. https://t.co/POzM26PXU5

The Parliamentary Inquiry into the Au Pair Affair begins.

So Peter Dutton’s Departmental Secretary has asked the AFP to investigate the leak of emails about Dutton’s grant of au pair visas. And guess which Minister is in charge of the AFP? Hint - it rhymes with mutton. 🐑 pic.twitter.com/iBBv9aaeOa

Grooming? Are you serious? That has a legislative meaning. Is that what he meant?

The full lyrics of the song used in my earlier video from QT today were just not OK. When I found out, I asked the team to take it down. Apologies.

As a community we expect high standards for the quality and safety of aged care services. Our Government shares these expectations. This Royal Commission will be about proactively determining what we need to do in the future to ensure these expectations can be met. pic.twitter.com/pmeMHQNHZI

20 September: Home Affairs Minister, Peter Dutton, survives a no-confidence motion based on his possible ineligibility under s44 due to his personal business interests in child care centres in Queensland. The motion moved by Greens MP Adam Bandt was defeated 68-67.

21 September: Prime Minister announces a $4.6 billion funding boost for Catholic and independent schools. Later that same day, the Prime Minister, the number one ticket holder at Cronulla Sharks and well-known “Sharkies” fan, was caught out saying he couldn’t be at the game but would be watching the Cronulla Sharks semi-final game against the Melbourne Storm at a pub that night. He was seen that later that evening, during game time, attending a Liberal fundraiser at the private home of a wealthy benefactor.

24 September: Prime Minister makes ‘indulgent self-loathing’ comment in a tweet to his followers, sparks further debate about changing the date of Australia Day celebrations on 26 January. ABC Managing Director, Michelle Guthrie, is unexpectedly sacked by the ABC board with limited details for the reason why.

Indulgent self-loathing doesn’t make Australia stronger. Being honest about the past does. Our modern Aus nation began on January 26, 1788. That’s the day to reflect on what we’ve accomplished, become, still to achieve. We can do this sensitively, respectfully, proudly, together. https://t.co/uM59Lwrr1p

“We asked him, ‘why are you here?’ He said, ‘I’m here because I heard that a lot of kids are not attending school’. But Borroloola school has one of the highest attendance rates in the NT. We were confused. He was really arrogant. He didn’t want to sit down and listen to us.”

27 September: Chair of the ABC, Justin Milne, resigns in the aftermath of Michelle Guthrie’s sacking. Assistant Treasurer Stuart Robert confuses “debt” and “deficit” on a Sky appearance, he was also caught taking a selfie when the camera unexpectedly turned to him.

Sorry, @fatmanscoop, I made a new friend at the AFL Grand Final this arvo. pic.twitter.com/bjgYz2wXuU


‘Eagle Rock’ ringing out at the G. Congrats to West Coast. A cracking game. Lived up to all expectations. pic.twitter.com/VecwVGwBFj

Another great spectacle. Roosters just too strong. Not just tonight, but all season. Cronk - a champion. Thank you, Billy ‘The Kid’. pic.twitter.com/OWp81zjO6m

We put it on the treasurers’ meeting agenda, we got the agreement & now, within 3 months, the GST will be removed.

Labor didn''t even get around to putting it on the agenda! pic.twitter.com/VVld8k3lOv

5 October: Sydney radio 2GB shock-jock and snappy dresser, Alan Jones, bullies Sydney Opera House chief executive Louise Herron, live on air. Australia learns Assistant Treasurer and Member for Fadden, Stuart Robert, has been slugging the taxpayer up to $2,800 per month – or $90 per day – for his home internet bills when the story breaks in mainstream media. 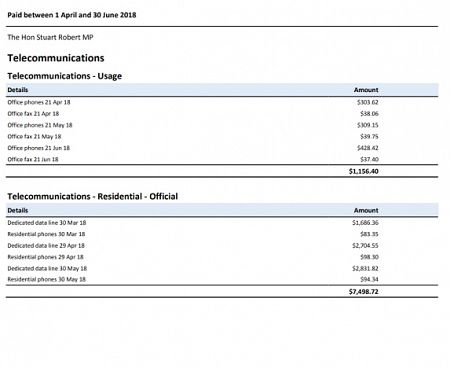 Doesn’t get much cooler than that #Bathurst1000 pic.twitter.com/U6YDvrFbnm

8 October: Prime Minister is a guest on the Alan Jones morning show. At that time, Alan Jones had failed to apologise to Louise Herron for his behaviour the previous Friday. The Prime Minister, in reference the backlash to the Sydney Opera House being used to promote a Sydney horse race, said Australians are being “precious” and that he sees no problem using “Sydney’s biggest billboard” to promote a horse race. A protest outside the Sydney Opera House planned for the following evening was announced that morning. Shortly after the protest was announced, Alan Jones apologised to Louise Herron and the Prime Minister made no comment in reference to the bullying of Herron by Jones.

10 October: Opposition Leader, Bill Shorten, pushes the Prime Minister to release former Liberal MP and report author Phillip Ruddock’s review into religious protections in Australia — which was released five months ago. Calls to release Ruddock’s report grew after a leak of the report suggested religious schools want to be able to ‘enshrine’ traditional policies that discriminate against LGBTIQ teachers, families and students. Prime Minister says he supports the current legislation on the issue, which allows schools to discriminate against LGBTIQ students and staff.

11 October: Debate erupts about religious schools and their right to discriminate against LGBTIQ students, families and teachers. Prime Minister says on Sky that no child should be discriminated against because of their sexual orientation. After being expelled with only 24 hours notice from Nauru, Médecins Sans Frontières doctors’ voices cracked with emotion, fighting back tears, some doctors told harrowing tales of their experiences dealing with asylum seekers, refugees and Nauruan locals. The doctors called upon the Prime Minister for a complete evacuation of all asylum seekers and refugees from Nauru.

The mental health of refugees detained by Australia on the Pacific island of Nauru has deteriorated so badly that some children are in a "semi-comatose state", unable to eat, drink or talk, Médecins Sans Frontières (MSF) said on Thursday.

So much has happened in 50 days and this is only a snippet of everything that has been happening in Federal politics.

Interestingly, I noticed a coincidental correlation on four occasions.

On four occasions, issues were raised that sparked furious debate, as they had done previously in the public domain. The timing of these issues being raised seemed to correlate perfectly with some highly sensitive issues for the Morrison Government.

28 August: Prime Minister announces his lapel pin gift in a tweet and press conference, prompting much discussion around the country. This happened the same day Julia Banks announced she was quitting politics at the next election because of bullying.

24 September: Prime Minister tweets ‘self-indulgent loathing’ comment, prompting much discussion around the country about changing the date of Australia Day. This happened the same day as Michelle Guthrie was sacked.

11 October: Leaks from the Ruddock report – which the Government had been sitting on for five months – made their way to the mainstream media over the previous 24 hours, prompting much discussion around the country about religious freedom. This happened the same day Médecins Sans Frontières held their press conference after being expelled from Nauru.

It has been a very "interesting" first 50 days of the Morrison Prime Ministership. Chances are there it won't last many more.

Scott Morrison: "...it reminds me every single day whose side I''m on."
Lapel pin is made in China.
Nuff said. #auspol https://t.co/zQK6PirWfJ