Kathy Jackson’s get out of jail free card

Against the backdrop of escalating fraud claims and potential criminal action, Kathy Jackson is refusing to attend court for psychological reasons. Peter Wicks from Wixxyleaks reports.

ON TUESDAY, I wrote an article on Kathy Jackson’s continuing attempts to delay multimillion dollar Federal Court proceedings against her by once again failing to show up for court to contest the claims.

She failed to front Federal Court yet again because she is apparently receiving psychological treatment in hospital according to her latest lawyer Philip Beazley.

We must not make light of mental illness as it is all too real for genuine sufferers, however it must be said that Jackson’s assertion seems extremely convenient under the circumstances. It is also a course of action many people knowledgeable with this long-running affair have previously predicted with significant cynicism.

Mr Beazley claimed that Jackson was not in a fit condition to provide him with legal direction — yet the affidavit he produced seemed to implicitly contradict that claim.

Beazley, for instance, seemed to have secured enough legal direction to produce an affidavit that sensationally described alleged death threats and, indeed, a suicide attempt.

I am not a psychologist, but Jackson’s extravagant attention seeking during the Thomson case and her outrageous media appearances at the Trade Union Royal Commission did not seem to indicate a person on the verge of total mental collapse. Of course, I could be wrong.

Also in the affidavit were claims to put before the court of breaches of process — claims that one might assume Beazley had been provided with directions to pursue.

Who was providing Beazley with these directions if not Kathy Jackson?

Justice Richard Tracey has suppressed much of the affidavit from publication.

It would be interesting to see what has been suppressed as it may contain even more legal directions from a client who is supposedly too ill to provide directions.

If Jackson is indeed mentally ill, I sincerely apologise for suggesting otherwise and I hope she recovers quickly — certainly before her case resumes in court again. After all, this matter has dragged out for more than 18 months and now we see yet another breach of court orders in what, on the face of it, appears to be nothing more than a desperate attempt to delay the inevitable.

If she is, as most suspect, claiming a mental health condition for self-preservation, then this is doing a monumental disservice to those who suffer from mental health issues — one made even more shocking by the fact that she has made her career working in the health industry.

Jackson’s claim is supported, of course, by a doctor’s report and certificate.

This documentation was dated 20 September — some two weeks before a large number of people, many being paid by the quarter hour, wasted their time and money travelling to court, some from interstate.

The doctors’ report, which has been suppressed, is apparently vague about Jackson’s condition, largely just stating she was an inpatient and would be in no condition to appear before the court.

Acting for the HSU National Office, Mark Irving rightly complained that for Jackson to have held onto a doctor’s certificate for two weeks prior to dumping it on the court at the last-minute was

“… quite extraordinary and unacceptable behaviour.”

Sources claim the only specific part of the doctor’s statement was when Jackson was expected to be well again — 15th January 2015, giving Jackson's lawyer a reason to attempt to delay proceedings until February 2015.

Just how does one put such a precise a time frame on a mental health condition? After all, it's not like the flu.

This remarkably precise prediction from a doctor so vague about Jackson’s clinical condition has resulted in the Court calling for a signed affidavit from him.

So, what is the significance of the 15th of January?

When the doctor’s report was written, no dubious extension to the Trade Union Royal Commission had been announced by Attorney-General George Brandis. Back then, it was thought the Royal Commission was to have been completed by the end of 2014 — two weeks prior to 15 January 2015.

Considering there are further sections of HSU acting national secretary Chris Brown’s witness statement that are still being suppressed and about which Jackson has sought to avoid cross-examination, having a doctor claiming illness until the Commission was complete would seem convenient.

There is also the matter of the $600,000 worth of improper credit card spending that has been made public since she last appeared before the Commission. This could have possibly seen Jackson subpoenaed to reappear once again — if it wasn’t for a handy doctor’s report.

"I am conscious of the many inexcusable failures to comply with the court's orders. It's a matter that I have taken very seriously."

Justice Tracey has expressed the need to see a sworn affidavit from Jackson’s doctor, rather than just a statement, before the matter is due in court once again on 5 November. This could see Jackson’s doctor facing questions about his diagnosis on the witness stand.

It would appear, on the face of it, that Jackson is using every trick in the book to avoid accountability for her actions.

Another example is her letter to Tony Abbott in July:

Most dismissed this as just another rant to grab some positive media spotlight by trying to say she was still attempting to clean up the union. However there is the view that there may be a more sinister motive.

If the HSU was deregistered it would cease to exist. What this would mean is there would be no union to seek civil damages from Jackson for her crimes, and no union to push for criminal investigations into her time at the union. Jackson may be basically using this as a last-ditch effort to pick up a 'Get out of jail, free' card.

From Abetz’s response it would seem that Jackson’s wishes would be granted if the government can be seen to be acting on a recommendation of the Royal Commission. 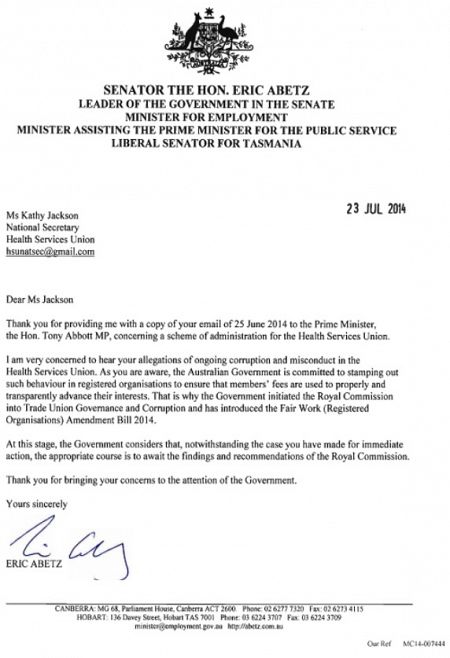 However, deregistering the union would seem to be a rather drastic action for very little when we look into it, as most of the branches of the HSU are running smoothly and almost completely hassle free.

There are some ongoing issues with the Number 1 Branch, which still has some factional infighting going on, however the members are currently being looked after far better now than they were when the Jackson/Bolano team was running the show.

It should be remembered that Kathy Jackson was involved in two branches: HSU East, which was shut down and put into administration making it no longer a concern; and the Number 3 Branch, which has gone forward in leaps and bounds since the non-factional Craig McGregor became Secretary.

Jacksons two pages of non-specific waffle ‒ that many suspect were written by her partner, the Tony Abbott appointed fair Work Commission VP Michael Lawler ‒ offers no evidence to support the action that the letter seeks, nor has anything of note been exposed by the Royal Commission aside from Jackson’s own widespread allegedly fraudulent activity.

Personally, I can’t see Tony Abbott or Eric Abetz being willing to stick their necks out so far as to grant this favour to save Kathy Jackson, nor can I see the Royal Commission seeking to have further questions raised over its integrity by recommending the HSU be deregistered.

That would be seen by many as high level corruption.

For those who may be concerned about Jackson’s mental status, there is hope. Despite being apparently unable to provide legal instructions to a lawyer, she has been able to summon the ability to file a claim for workers compensation.

It was reported in The Australian by Pia Ackerman and Brad Norington (who has been leading the way in mainstream media coverage of the HSU matters) that the claim is for 80% of her last salary which was when she was Executive President of HSU East, before that branch of the union was shut down by a Federal Court and an administrator appointed. This could see Jackson collect approximately $230,000 yearly by way of compensation.

Jackson, it seems, has suddenly two years later decided that there is a buck to be made in a workers comp claim. She may, perhaps, have been spurred on by the claim made by her right hand man Marco Bolano who has been living on the workers compo gravy train since early last year.

Bolano, you may remember, was apparently so mentally stressed, he was able to fly back and forth between Sydney and Melbourne, do numerous press interviews, appear at a Royal Commission, and attempt to physically intimidate members of the press and witnesses at a Royal Commission ostensibly into exactly that sort of behaviour by union officials.

For those who are suffering from stress and are seeking help rather than profit, please follow these links to contact Lifeline or perhaps Beyond Blue for support.

For those who think that Jackson should now be treated with kid gloves, consider comparing her plight with that of Craig Thomson.

When Craig Thomson made his parliamentary address, there were many who spoke publicly of their concern for his mental health. Kathy Jackson, however, was not one of those concerned, continuing to viciously attack him at every opportunity.

Thomson never once tried to use mental health as a defence and instead chose to fight the allegations — and, indeed, continues to do so, with his matter currently on appeal.

On the other hand, Kathy Jackson would rather use all manner of excuses to avoid scrutiny than fight the allegations against her.

We have seen numerous breaches of Federal Court orders, we have seen the Royal Commission accused of an ambush as she flees the witness stand, we have seen her throw up her past sex life just to avoid cross-examination — and now make a mental health claim.

Kathy Jackson, in my view, is making a mockery of the legal system in this country and it’s about time someone had the guts to end it.