Kathy Jackson has a fabulous time sitting cross-legged in court and laughing outside it as she faces her long-awaited criminal charges for defrauding HSU members. Peter Wicks reports.

Today in Melbourne Magistrates Court Kathy Jackson started her court appearance as she will likely eventually finish it — in the dock.

Jackson arrived at court this morning to face 70 fraud-related criminal charges, facing a potential prison sentence over her misuse of at $1.4 million of union members money. By her side was her "beloved" Michael Lawler — who will probably be there every step of the way, given he probably hasn't much to do after his stint at the Fair Work Commission ended in a cloud of shame.

There was not as much media attention this time around for Kathy; if she'd given a doorstop on the way in this time she would have been virtually talking to herself.

Courtroom 4.1 is not a large courtroom and, as such, has limited seating. Entering the already full courtroom Jackson headed for the dock, where those already prisoners or in custody sit, there she plonked herself down on the step. Once there, she was promptly informed by a court official that she was not allowed to sit on the floor in the dock. From there, she moved to the front of the court, apparently to sit on the floor there (or so I was told — I couldn’t see her or that part of the courtroom floor from where I was sitting). In any case, it doesn’t appear she has a great deal of respect for courtrooms.

Kathy Jackson sits cross-legged in court to hear her fatehttps://t.co/Kh6W5yheoH via @FinancialReview

Sitting through other matters, such as armed hold ups, heroin and methamphetamine trafficking, and other assorted drug and assault related charges, it was clear Jackson was going to be in fine company from now on.

When Jackson’s case came up, the defence claimed that the charges on the police charge sheet were not clear enough. Jackson’s lawyer Philip Beazley argued that it was not enough to say that there was funds reimbursed to Jackson by the union as a result of deception, the charge needed to go into exactly what that deception was. Magistrate Charlie Rozencwajg has ordered that the prosecution provide further relevant detail for the charges where required.

Kathy Jackson is seeking to call 68 witnesses for the defence and the magistrate has asked her to provide details on their relevance to the case before he allows such a large number. At one stage, Magistrate Rozencwajg half joked that Jackson might have been seeking to hold another Royal Commission.

In addition, Jackson is seeking to cross-examine her former HSU BCOM (branch committee of management) colleagues regarding the approval of her expenses which make up part of the approximately $1.4 million the Union alleges she has misappropriated. Her reasoning is that given the minutes of the BCOM meetings are part of the documentation that has gone missing that she should be able to verify the members memories. Audible stifled laughter could be heard throughout the court when the mystery flood was brought up once again.

Even Jackson’s lawyer seemed to mock the flood argument after it was brought up by the magistrate, saying:

“That’s the usual excuse, your honour.”

Although I can’t remember anyone else using it as a defence – or a fire, for that matter – as Jackson has. Just like James Taylor, Kathy has seen fire and she’s seen rain, but her sunny days will come to an end eventually one would feel.

Of the prosecution witnesses, we now know that one is in custody (that is likely to be Michael Williamson) and two are in China. One of those in China I would assume to be Wai Quen the former employee of Jackson’s union that Kathy paid $22,000 for legal services long after Quen had left the union and moved overseas and around the time Kathy’s former husband is alleged to have had a sports car shipped to Australia from Asia. Wai Quen in a written statement claimed she never received the money or provided any legal work for the union after she left it. This was something reported here by me back in July 2012, when the mainstream media were refusing to look into this, being more focussed on calling Jackson a "heroic whistleblower".

The matter will be before the court again on 31st March to determine witnesses for the committal hearing, which will take place on November 13 and has four weeks scheduled in which to run.

Outside the court afterwards, Jackson walked away with Lawler laughing like a demented hyena — and why not? 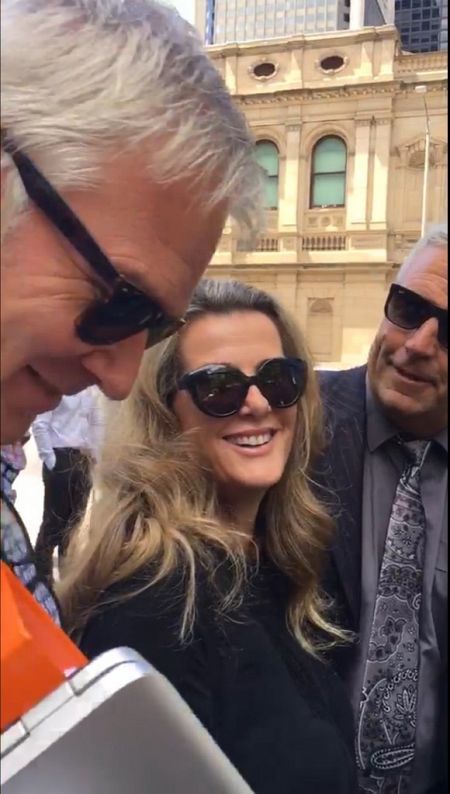 It's all just a game for Jackson and her oddball partner

Jackson is playing for time and this committal hearing only means the matter drags out for yet another year. During the committal hearing, she and her legal team will gain an understanding of the strength of the prosecution’s case so they can decide whether they will do a deal with the prosecution for a lesser sentence, or whether they roll the dice and let the matter proceed to a full trial some time in 2018. Satisfying Jackson's goals, such a trial would that take months to complete and then likely be appealed sometime in 2019.

The wheels of justice turn slowly indeed. Nothing is certain, but I believe that while Jackson may be laughing now, but will likely be crying later.