Julian Assange’s father, John Shipton, will be speaking in Brisbane at the Kurilpa Hall in West End on Wednesday 11 December.

The event is part of a developing movement across the globe aimed at saving his son, who is currently languishing in a bleak British prison, awaiting likely extradition to the United States to face the death penalty for the crime of journalism.

Mr Shipton will report on Assange’s prospects in facing U.S. espionage charges, outline Julian’s serious health concerns, and will be interviewed by reporters from Independent Australia, as well as field questions from the audience. The event is to be co-hosted by Independent Australia and the Queensland Council of Civil Liberties.

This event comes after a group of 60 doctors last week wrote an open letter to the British Home Secretary, indicating Assange’s health was so bad they feared he could die in prison. They requested he be transferred from the horrifying conditions in which he is currently being held, in Belmarsh Prison, to a university hospital. So far, as usual, these reasonable and humane requests have fallen on stony deaf ears.

Also speaking at the event will be Ciaron O’Reilly, a Catholic Worker and Ploughshares activist who has served time for his anti-war protests in the U.S. and Ireland. Mr O’Reilly was gaoled for disarming American planes on their way to bomb Iraq in the First and the Second Iraq wars. A supporter of Assange, O’Reilly has been an organiser of demonstrations outside the Ecuadorian Embassy and the infamous Belmarsh Prison.

Mr O’Reilly said the conditions in Belmarsh were designed to crush Assange, physically and emotionally.

“The prison system is designed to isolate, demoralised and defeat the resister,” said O’Reilly.

In the case of Julian Assange, the British Government has doubled down placing him in a Category A prison — for a breach of bail, when there was never a charge!

Within Belmarsh Prison, they have moved Julian out of general population into isolation and a 22-hour daily lock down.

He is subjected to ‘control moves’ to avoid any contact or fellowship with other prisoners. These measures are designed to break down the mental and physical health of Julian Assange.

Julian Assange's father John Shipton, together with former anti-war prisoner of U.S Ciaron O'Reilly, will appear at a public event supported by Independent Australia and the Queensland Council for Civil Liberties (QCCL), at Kurilpa Hall, Brisbane, at 7 pm on Wednesday, 11 December 2019. Tickets only $10 available HERE. You can join the Facebook event HERE. 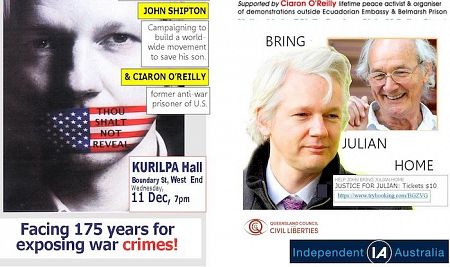 (Mr Shipton will also be speaking in Mullumbimby on 8 December and in Nimbin on 12 December.)