After a tour of the crippled Fukushima Daiichi nuclear facilities this month, U.S. senator Ron Wyden has urged the Japanese Government to urgently seek international assistance to relocate spent fuel rods stored precariously in unsound structures close to the ocean and prevent more deadly nuclear radiation being released into the environment. 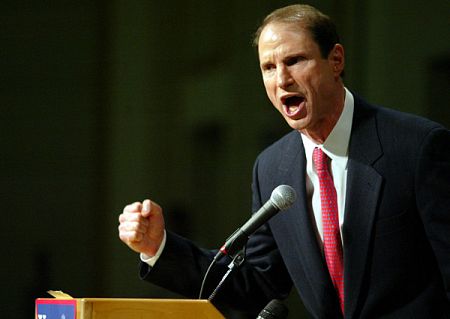 After an onsite tour of what remains of the Fukushima Daiichi nuclear facilities decimated by last year’s earthquake and subsequent tsunami, U.S. Senator Ron Wyden (D-Ore.) a senior member of the U.S. Senate Committee on Energy and Natural Resources, sent a letter to Japanese Ambassador Ichiro Fujisaki looking for ways to advance and support clean-up and recovery efforts. Wyden’s principal concern is the relocation of spent fuel rods currently being stored in unsound structures immediately adjacent to the ocean. He strongly urged the Ambassador to accept international help to prevent dangerous nuclear material from being released into the environment.

Wyden wrote in his letter:


“The scope of damage to the plants and to the surrounding area was far beyond what I expected and the scope of the challenges to the utility owner, the government of Japan, and to the people of the region are daunting. The precarious status of the Fukushima Daiichi nuclear units and the risk presented by the enormous inventory of radioactive materials and spent fuel in the event of further earthquake threats should be of concern to all and a focus of greater international support and assistance.”

Wyden visited Fukushima on April 6, 2012 while on a Congressional delegation trip to the region. He and a staff member reportedly wore radiation suits as they toured the facility and met with workers and managers from the Tokyo Electric Power Company, TEPCO, which is responsible for the clean-up.

Facilities and reactors still in state of disrepair

In a statement released on Monday, Senator Wyden found that the facilities designed to house spent nuclear fuel, and the reactors themselves, were still in a state of disrepair and located in areas that would make them susceptible to further damage from future seismic events. He further stated that the reactor buildings still contain large amounts of spent fuel – making them a huge safety risk. The only protection from a future tsunami the senator observed, he said, was a small, makeshift sea wall erected out of bags of rock.