If you are a rich, kindly, elderly lawyer with dementia, the last thing you need is to cross paths with Kathy Jackson and Michael Lawler, writes Peter Wicks. 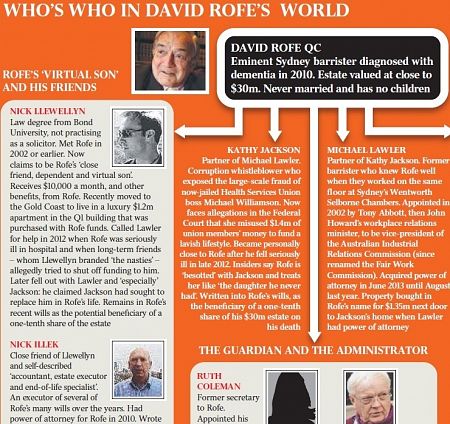 Image via The Australian

TODAY, I have to take my hat off to the investigative journalism of Brad Norington of The Australian.

Those of you who read the Weekend Australian would have undoubtedly seen Norington’s detailed and in-depth report on some of the goings on behind the scenes in the lives of Kathy Jackson and Michael Lawler. The Norington reporting, has clearly been the result of countless hours of research, and allegedly shows the behaviour of these key figures in the Jacksonville saga sinking to a new low.

For those who missed the reports in the Weekend Australian and today's Australian (2/3/15), the revelations are based around the finances of David Rofe QC.

David Rofe is an 83-year-old man of high standing in the legal community who has had a distinguished career and is estimated to hold a $30 million estate. Mr Rofe, sadly, now suffers from dementia. Even more unfortunate for Rofe, he was unlucky enough to cross paths with Kathy Jackson after he heard her complaining on radio about not being able to afford a lawyer. Despite his diagnosis of dementia, Rofe was keen to help out where he could with Jackson’s legal woes pro bono and offered his services, which Jackson no-doubt accepted graciously.

I’m not going to go into great detail about how that relationship developed and turned into what would appear to be a bizarre love triangle that also involved Michael Lawler, the gritty details can be read in the Norington articles. However, the result has been numerous wills being left in dispute, one of which has Jackson as beneficiary of a $3 million share of the Rofe estate. The relationship also saw Jackson performing “companionship services" for the 83-year-old Rofe — services that were described by Nick Llewellyn, the 40 year-old man who had been previously performing them, in the following way:

"When a younger attractive man spends time with someone older, there has to be a trade-off. I'm a young man used to the finer things in life."

Last month, the PIN numbers on Rofe’s bank account had to be changed after Jackson allegedly went on a spending spree with his card buying computer equipment — despite Rofe never having used a computer and being in no condition to learn now. This occurred in the same month Jackson’s lawyer tried to tell court that she may still be incapable of a defence due to the mental stress brought on on by a minor fire in a desperate to further delay her case from being heard.

In amongst all this, Jackson’s partner, Fair Work Commission Vice President Michael Lawler also became heavily involved in the finances of the dementia sufferer.

Michael Lawler fought for and was granted a power of attorney over the Rofe estate.

With this authority, Lawler purchased a $1.35 million dollar home with Rofe's money right next door to Jackson’s house in Wombarra, apparently for the dementia suffering 83-year-old man to stay in. Lawler insisted it was in Rofe’s best interest, despite the house allegedly being extremely poorly suited for a man of Rofe’s age and condition.

While all of this was going on, apparently Michael Lawler was hard at work on his approximately $435,000 taxpayer funded salary.

All this, of course, leaves another huge question mark over the judgement of the man who appointed him — Tony Abbott.

Michael Lawler was appointed to his senior role at the now Fair Work Commission by Tony Abbott in 2002 when he was Workplaces Relations Minister. This is an important judicial position, equivalent of a Federal Court judge, making it imperative that the holder of this position is someone of high moral standing, given they in a position to pass serious judgement on others. This is not the type of role for someone closely involved with an individual allegedly responsible for possibly the largest fraudulent misappropriation of union members' funds this country has ever seen. Nor is it the type of role that should be given to someone who, based on these latest allegations, has all the appearances of a gold digger a la, allegedly, Sophie Mirabella.

Many have wondered if it was convenient for Abbott to have a friendly appointee in the Fair Work Commission when Abbott was so desperate to see Craig Thomson charged and convicted to bring down the Gillard Government — an attempt many have claimed was an attempted coup. It should be noted that despite serious allegations against Lawler's partner, Tony Abbott still saw fit to sing Kathy Jackson's praises in parliament.

Another thing that this highlights is the disgraceful apology that was made in parliament and moved by Christopher Pyne. The apology for the words of Craig Thomson that, according to Pyne, smeared the character of Kathy Jackson and her illustrious associates, such as Jacksonville standover man, Marco Bolano.

Pyne and the Coalition seemed to think that people like Jackson and Lawler are people we should look up to and admire. Jackson is facing Federal Court for the misappropriation of $1.4 million and is still awaiting the criminal investigation sought by the HSU National Office and recommended by counsel assisting the Trade Union Royal Commission. Her partner Lawler has also been deeply involved in the HSU dispute and we now find that he allegedly has a penchant for dabbling in the finances of elderly dementia sufferers.

For Tony Abbott to leave Michael Lawler in his current position is an endorsement of his questionable behaviour. The public deserves much better.

Catch up on the full Jacksonville saga here. You can read more by Peter Wicks on Wixxyleaks or follow him on Twitter @madwixxy.

How Jackson, Lawler and Abbott tangled Thomson with the HSU https://t.co/NalwD6FjqZ @IndependentAus